Extreme Poverty and the Indivisibility of Human Rights 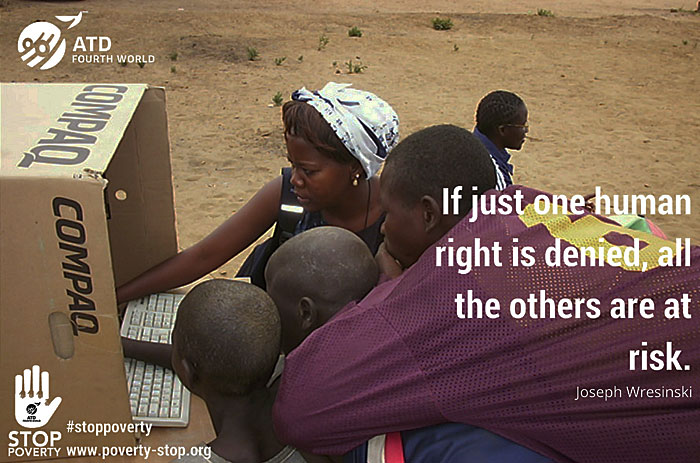 December 10 is Human Rights Day, observed every year around the world as the date when the United Nations adopted the Universal Declaration of Human Rights. In 1989, Joseph Wresinksi, founder of ATD Fourth World, wrote “Extreme Poverty and the Indivisibility of Human Rights”. The excerpt below talks about “…the denial of the right of those in poverty to inhabit the earth and to exist in the eyes of others”.

Today more than ever before, human nature and destiny are the centre of attention. For aren’t they the real subject of all debates and struggles that focus on human rights throughout the world?

Yet forty years after the United Nations’ Universal Declaration on human rights, achievement is more limited than many had hoped; more limited, too, than we had long imagined in our Western democracies. The world is not, as we had thought, divided into countries where human rights prevail and countries where they are less fully, or not yet, respected. The extreme poverty which has resurfaced in rich countries where its existence had been forgotten is now understood as a systematic violation of all fundamental human rights. There are therefore serious infringements of human rights in every country, which are not accidental but inherent in the way people organize their lives in the national and international community. […]

Those in  extreme poverty revealed to me the day-to-day realities of life which unite them across cultures and continents and which mean that they all live as outlaws, everywhere. These realities led them to choose the term “Fourth World” to designate themselves as a people outside all the worlds that others have fashioned for themselves. I also wish to bear witness to the active refusal to accept that situation, demonstrated both by its victims and by those who have chosen to stand with them. This refusal is based, in all parts of the world, on a concept of the human being endowed with the right to responsibilities and to the means of carrying them out for the good of all. It is a concept of the human person who is indivisible and thereby bearer of indivisible rights and responsibilities. And it is a concept of the human person who is indivisible, and part of an indivisible humanity, whose members cannot be dissociated and in whose mission and destiny of those in extreme poverty must participate. […]

[A]ll major advances towards a greater degree of humanity have been achieved, through the centuries, by turning back to people in  extreme poverty. I would add that, unfortunately, what is owed to those in  extreme poverty from age to age is soon forgotten. Today we seem to have forgotten that it is to people in poverty that we owe the concept of the human beings born equal and free and therefore entitled to participate as an equal, free and indispensable partner in the life of their community.

This conception seems to be acceptable to all people, whatever their cultural or spiritual allegiances. In the view of those in  extreme poverty, all human beings are invested with the same mission, namely to advance the right of all to receive the means to be and to act in accordance with their true grandeur.

A People Deprived Of The Right To Inhabit The Earth

From the very earliest time in my childhood to the present day, those in  extreme poverty have always seemed to me to be families – a whole people -who were forbidden to inhabit the world of others, to inhabit cities, countries, the whole earth. For could we really use the term “inhabit” to describe the way they were obliged to huddle together, to dig themselves in, to find whatever shelter they could in a slum on the edge of which my own family lived in a hovel? […]

By virtue of the very misery of their accommodation, they were regarded as unworthy to ever inhabit the neighboring community of somewhat less unfortunate families. […]

At Noisy-le-Grand, a forgotten outpost… several hundred families with over a thousand children between them lived in “igloos” of asbestos cement which, elsewhere in France, were reserved for pigs. Even there, they were allowed to live only temporarily, for how could these “lepers” be authorized to reside so close to the city of Paris for long? There, too, I found families treated as objects of official measures of assistance and control, rather than as people endowed with rights. They were families identified only in negative terms: “asocial,” “maladjusted,” “difficult,” “problem families”; even the more or less neutral label “homeless” had finally been taken from them. […]

Everywhere I found the same denial of the right of those in  extreme poverty to inhabit the earth and to exist in the eyes of others: homeless families in major North American cities who had their identity as a family wiped out by being crowded together in “Welfare hotels”, mothers and children on one side, and fathers on the other. Families in Latin America who had fled the countryside and famine to cling to the edge of a ravine near the capital. In some of these cases, births and deaths were not even recorded, since people should not dwell in these places where no residence was allowed. When tropical rains swept a cabin into the abyss, the children in it would have lived and died without ever having existed officially. Nor did the families living on marshland on the edge of a bay somewhere in the West Indies exist in national records or international statistics. […]

Is there any fundamental difference between the extreme poverty of those who are deprived of their rights in distant countries and the deep poverty endured by a family in Ile-de-France (Paris region)?

The end of the road is, above all, this slipping from an identity that is already negative to a kind of non-identity, an administrative non-existence, the disappearance from every register, every set of statistics. Human beings, whole families then take on the appearance of ghosts: they have been seen somewhere, but nobody remembers where exactly nor how many they were. For them it is the end of all hope of still being among those who once proclaimed themselves to be “We, the peoples of the United Nations”, that international community which chose the achievement of human rights as its ultimate goal. The loss of identity also sounds the death knell of any hope that, because one exists in the eyes of the world, one may join forces with others, in order to fight for one’s rights together. Those in extreme poverty are, the more they are deprived of the right to inhabit the earth, and the more they need to join forces across continents. Yet, unfortunately, the less wealth they possess, the fewer rights they have, the less free they are to unite in common struggle. Without identity, they are deprived of a history of their own and excluded from the history of their people. They are prohibited from belonging to any group which, in the name of its past and present history, would have a common goal to pursue in the future. […]

Extreme poverty, since it cuts out all human rights, is an unbearable waste of human intelligence, inventiveness, hope and love. It means throwing away an incalculable capital of men, women and children who are banned from all justice, all administration, all communities and all democracy. […]

For those in poverty tell us over and over again that man’s greatest misfortune is not to be hungry or unable to read, nor even to be without work. The greatest misfortune of all is to know that you count for nothing, to the point where even your suffering is ignored. […]

For those in extreme poverty, it appears that only a campaign to have all human rights respected can safeguard their human dignity. Is it not precisely our preoccupation with the achievement of now one category of human rights, now another, that has made us lose sight of what ought to be the very purpose and raison d’être of all these rights, namely, the recognition of the inalienable dignity of every human being? What other reason or excuse can there be for our societies allowing some of their members to be exposed to a destructive misery beyond poverty and life’s uncertainties and failing to mobilize all their resources to put an end to that disgrace?