Launch of Stop Poverty Campaign in The Central African Republic 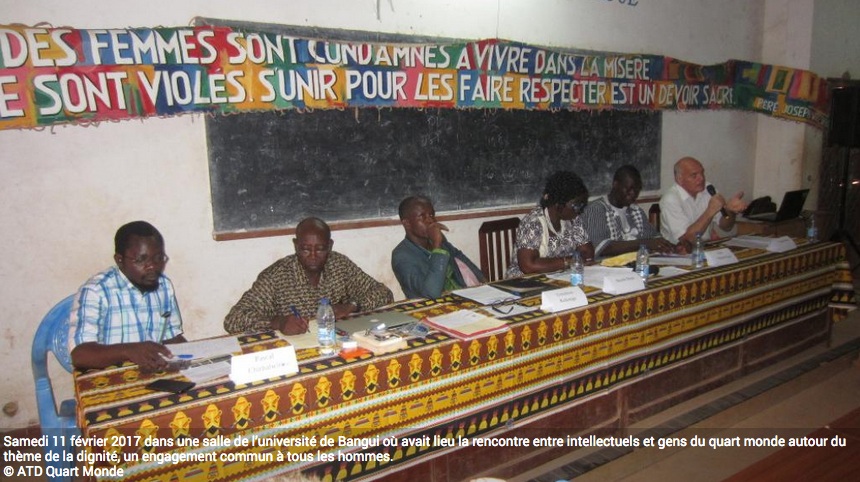 The 60th anniversary of the beginning of ATD Fourth World, the 100th anniversary of the birth of its founder Joseph Wresinski, and the 30th World Day for Overcoming Poverty: 2017 marks an historic occasion in the world and in Central Africa. M. Kiser Maidou, an ATD Fourth World Street Library coordinator in Central African Republic, describes the launch of the #StopPoverty campaign in Bangui, on the February 11:

The University of Bangui welcomed the members of ATD Fourth World, professors and students alike gathered around a table for a public debate. Some of the participants were just getting acquainted with ATD Fourth World, its actions, and the realities of life for the most excluded people in Central Africa.

With the theme of “Joseph Wresinski: A Philosophy that Works,” the participants contributed to the debate from their own point of view: Dr. Maurice Guimendego, historian; Fr. Médard Sane sj, theologian; Mr. Timoléon Kokongo, legal expert; and Mr. Eugen Brand, permanent Volunteer Corps member and former Director General of ATD Fourth World International. During the debate, students, teachers and ATD Fourth World activists including Gisèle Lamassi and Mr. Parfait Nguinindji also spoke. Finally, everyone had the chance to sign the campaign call to action and add their message. A group photo concluded the event.

The round table was moderated by the journalist Mrs. Nicole Dayo and her assistant Mr. Pascal Chirwalwhirwa, who explained that 100 years after the birth of Joseph Wresinski we have a world view and a movement. If Wresinski’s work continues, it is because it is working. With this approach, the poor and the rich get together on the same mat, in other words they speak together, and share their ideas on fighting chronic poverty.

“We all have a peaceful power,” Fr. Médard Sane sj said, calling on people do peacefully disrupt the lives of those in power in order to get them to join the ATD. For this, all social classes must be gathered on this “mat” so that each and every one of us may fight at their own level as a social challenge, as a fascinating enterprise.”

Barthelemy Boganda, the president and founder of the Central African Republic affirmed this: “ZO KWE ZO” (“Every person is a person” in the Sango language), or as Joseph Wresinski said:

“Wherever men and women are condemned to live in extreme poverty, human rights are violated. To come together to ensure these rights are respected is our solemn duty.”

Dr. Maurice Guimendego highlighted that even though the two founders were not with us, we are living the legacy of their thoughts.

Mr. Timoléon Kokongo insisted on the engagement which is a “promise to be kept” against chronic poverty. Some of the participants put their engagement in writing at the end of the meeting.

On this day in Bangui, people got on with the task at hand. Let’s work tirelessly as a team at implementing the ideas of Joseph Wresinski. The task may prove difficult, but together as a family, we will make the change we all wish to see.

Our thanks to the Rector of the University, to the Dean of Human Sciences and to the Head of the Philosophy Department, Dr Yakoubou; to the organizing team, the volunteers working with ATD Fourth World Central Africa, and to the ATD Fourth World African regional team; and to our partners and other movements. Let’s all remain alert to the distress calls of this world so that we may bring forth the answer: unity, a virtue in all of us.

Above: In Bangui ATD Fourth World members sing Zo kwe zo, the motto of the Central African Republic: “All people are people, All of us are only one Men and women Black and white All ethnic groups We are one. “