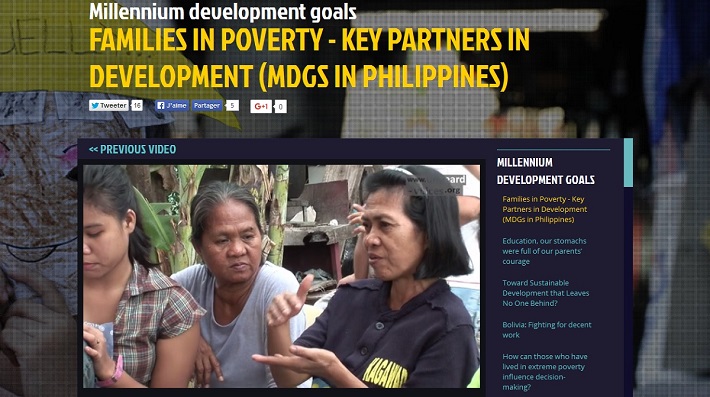 “Regarding the MDGs, the government should ask the opinion of the people. Because they are the ones experiencing poverty, not the government.”
Waldo, who lives under a bridge in Manila, the Philippines.|

In a world confronted with many challenges, there is one resource that remains untapped: the know-how of people in extreme poverty, who fight against it daily, and try with all their might to protect their children from its effects.

People with an experience of poverty will be leading the dialogue in a seminar entitled “Towards a sustainable development that leaves no one behind: the challenge of the post-2015 agenda”. The seminar will be held at the Committee of the Regions, in Brussels, on January 22nd 2013. They will be joined by European officials and representatives of civil society. Among those present will be Philippe Maystadt, President of the Belgian Federal Council for Sustainable Development, Mercédès Bresso, Vice-President of the Committee of the Regions, Roberto Bissio, Coordinator of Social Watch, Olivier Consolo, Director of Concord, and Isabelle Pypaert-Perrin, Director-General of ATD Fourth World.

40 of the participants live in very difficult conditions, in Belgium, France, Haiti, Mauritius, Poland, the Philippines, and Spain. The debate will stem from the realities these participants face up to in their daily lives. For instance, the Haiti delegation will explain how, following the 2010 earthquake, they got together in order to assert their right to participate in the reconstruction of their country. In Poland and Belgium, homeless people, or living in inadequate housing, have analysed the housing issue, their difficulties to live as a family and to access their fundamental rights.

The seminar is part of an ATD Fourth World three-year research project to evaluate the Millennium Development Goals (MDGs) with people living in extreme poverty. The project aims to ensure that people living in extreme poverty can contribute their knowledge and experience to the development agenda. Policy proposals will be made to United Nations bodies at a conference in June, in New York. The work aims to contribute to the framework to be set up after the MDGs 2015 deadline.

ATD Fourth World invites journalists to attend the seminar, from 14h to 16h15, which will be held at the Committee of the Regions, bat. J. Delors, rue Belliard, 99 – 1040 Brussels.