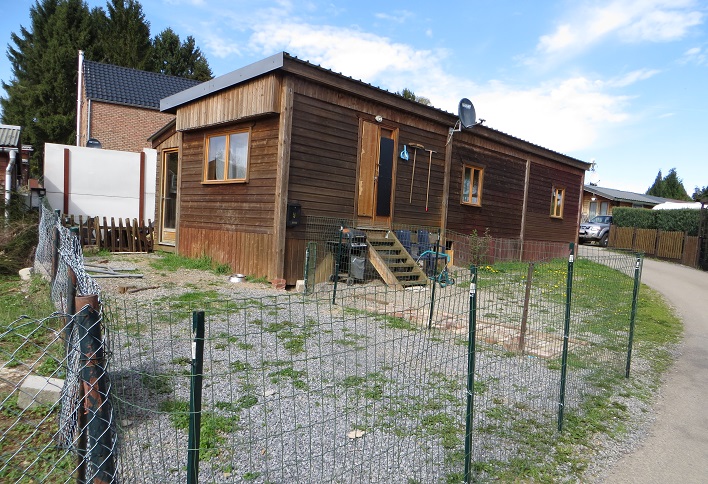 In Belgium, living in public campgrounds has become the only alternative for people who cannot find affordable housing. These campgrounds, with RV hook-ups or pre-fab cabins, are intended for vacationers. However, in the late 1970s, people began to move in and live there permanently. Since then, more and more people are doing this because there is so little public housing. It is now estimated that over 10,000 people live in these often-remote locations, with a very limited access to any public services. In the Walloon region (French-speaking Belgium), one such campground located five kilometres from the nearest town has become home to about 300 people. Members of ATD Fourth World visited to get to know their situation.

The living conditions are harsh because the campgrounds are not designed for year-round residence. Water is cut off for a time every day and the power goes out on a regular basis. The facilities were intended for short term vacationers. People living there have to organise amongst themselves to wash, cook or do laundry. The power cuts are unpredictable. “It sometimes happens when we are cooking or eating meals. Last time, there was one in the morning so I couldn’t take a shower before going to school”, says a teenager. Transportation is another problem. To get to town, there are only two buses a day, one in the morning and one in the evening. It is difficult to come home from school or to go shopping, especially if families do not have a car or if they cannot afford gasoline. Looking for work or attending training programs — even getting to the doctor or hospital — is a challenge. Going out for any kind of leisure activity is almost impossible.

Many residents talk about the stigma they suffer because they live in the campground: “Sometimes we are a little embarrassed to say we come from the campground. You’re blacklisted. You’re shunned.”

“When we go to the village and we say we live in the campground, we feel looked down on. They assume things about us. We don’t matter to them.”

Residents call for caution in the fight to access basic services. A young couple explains: “If we want to take action to change things, there’s a risk that it might backfire. For example, if we fight for the campground to have better infrastructure, like water and electricity 24/7, we’re asking for public works projects to take place — but that could mean that the cost of water and electricity would go up. And if the mayor sticks his nose in our business here at the campground, he might just prefer to demolish it because the homes here are substandard.”

Even though there is sometimes tension and conflict among neighbours, there is also a good deal of friendship and support. One couple who has lived there for several years says: “People help each other out. Sometimes teenagers give us a hand. When we arrived, we got 33 tons of gravel to level the lot. We also got help to move our trailer. We all get along because everyone understands each other here.” Another woman explains: “We find a way to get by together. If a person has car trouble but needs to go down to the drug store or to get groceries, then someone figures out a way for them to get there.”

Despite the challenges of living at the campground, it is an affordable alternative to rising rents and utility bills. One couple explains how they were able to become home owners: “Thanks to a lease-to-own plan, we were able to buy the trailer and the plot it sits on. That meant no more monthly bills, and eventually we were able to save enough to move out of the trailer and build a house on that plot […]. This was my dream. What I always wanted was to have a real home. But I never could have bought a house in town.”

Running Out of Options

However, most people living in the campground are not there by choice. One resident explains: “Poor families have to live here because rents are too expensive in town […]. We used to park our trailer in town, but the local officials did not want us there because they don’t consider a trailer as a home. We requested public housing but the wait list is too long.”

In 2002, the regional government, aiming to counter the growing phenomenon of long-term residents in the camping grounds, adopted a multi-year action plan for permanent housing in tourist facilities. The purpose of this plan is to support any residents of the campground who want to be relocated. Moreover, the regional government encourages municipalities to limit or even prohibit new people moving into the campgrounds. Ultimately, this plan aims to clear all campgrounds of permanent residents.

Residents are anxious that they will not find better options. One says, “If the campgrounds close, some of the people here will start building shantytowns. People will use tarpaulins, old tents or trailers to protect themselves from the weather […]. Living in a trailer doesn’t cost much. But if this campground is closed, people will settle in another location. Even if it’s illegal. People don’t have a choice. It’s the only way they can live.” Living illegally will mean access to even fewer community facilities. Moreover, without any home address, people will be unable to access their social rights. Although the government housing plan purports to promote decent housing, people who are already struggling fear being dragged into even more insecure conditions. Broadly speaking, the regional government’s tendency is to reduce the number of housing units previously occupied by people living in poverty (whether camp sites, public housing, or substandard private housing) without proposing any viable alternative.

When a person has no place to live, everything else just becomes that much more difficult. By preventing people who struggle with poverty from settling in campgrounds, this plan defeats its own stated purpose: overcoming poverty and guaranteeing “the right to housing and to a decent life, thus implementing Article 23 of the Constitution”. For an approach to be based on human rights, it must consult people, taking into account their view of their own situation.