The Story of Mary Rabagliati and People the World Forgot 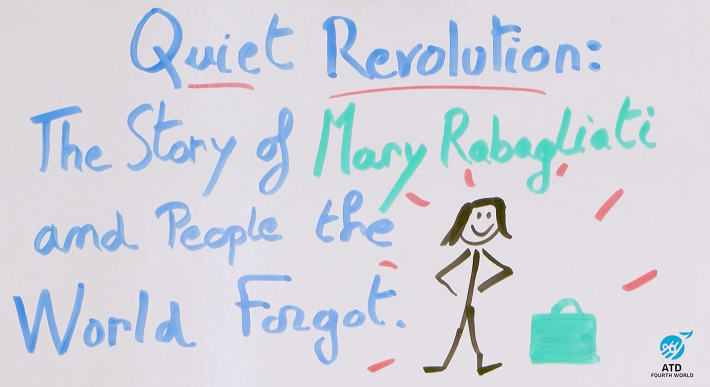 Here is the first in a series of videos about the life of Mary Rabagliati. She was one of the first volunteers to join Joseph Wresinski in Noisy-le-Grand, France, founding what would become ATD Fourth World.

Watch the second video in the series: “The Road Just Stopped and No One Else Gave a Damn”

Watch the third video in the series: “In the Middle of Filth, Fighting for the Hope of Dignity”

Watch the fourth video in the series: “It’s Always Our Blood That Gets Spilled”: On the Front Lines of the War on Poverty

Watch the fifth video in the series: “They Deserve the Stars”

Watch the sixth video in the series: From Birmingham to Nairobi: Rights for Women and Girls in Extreme Poverty

Watch the seventh video in the series: A Visit to Apartheid South Africa: Immense but Hidden Potential

Watch the eighth video in the series: A Meaningful Foundation for Friendship in Africa

Watch the ninth video in the series: “Mary Helped Us Discover Our Strengths”

Below, Diana Skelton writes about what motivated her to create these videos.

Quiet Revolution: The Story of Mary Rabagliati and People the World Forgot

As we mark the 60th anniversary of the founding of ATD Fourth World, I am thinking back to 1986 when I first joined ATD’s Volunteer Corps. Preparations were underway for ATD’s 30th anniversary. At the time, I was 20 years old and found it perplexing to celebrate anything given that, despite many years of efforts, extreme poverty remained a cruel fact of life. My housemate and fellow Volunteer Corps member, Mary Rabagliati, was exasperated by my question. She said:

“When you’re stuck in the misery of poverty, joy matters even more! All of us should always find something to celebrate: a reason to go out together, or to plan a journey, or just to dance. This is not ‘in spite of poverty’; it is so that people who are excluded from society can finally join in everything that makes the world extraordinary!”

Like me, Mary joined ATD when she was 20. That was in 1962, just a few years after Joseph Wresinski had first begun recruiting volunteers to join him in living in the emergency housing camp of Noisy-le-Grand, France. Mary became one of a handful of co-founders who collaborated closely with him for decades, eventually developing an international movement. With her vivacious and brutally frank personality, she inspired many people from all walks of life to get involved. She lived alongside families in extreme poverty in France, the US, and her native Great Britain. She pioneered many of ATD’s initiatives at the United Nations and in Africa.

Tragically, Mary died at the age of 51 in 1992. One of her responsibilities with ATD had been publishing books and newsletters that would educate the general public about extreme poverty. And yet the vast majority of what she published was either unsigned or a translation of what Wresinski or others had written in French. To celebrate ATD’s 60th anniversary, I wanted to be able to read Mary’s own distinctive voice. In the 1960s, Mary was the first one to develop archives for ATD, so it was thanks to the work she initiated that I was able to find her writing in our archives, now collected at the Joseph Wresinski Archives and Research Centre in Baillet-en-France.

Her letters, reports, and interviews fascinated me. Reading about the year she spent in the United States during the War on Poverty and the civil rights movement helped me to understand how she and Wresinski decided to draw on what they learned there to shape ATD. They were inspired by the passionate engagement of many diverse people and groups — but they were also determined to avoid the pitfall of a lack of cohesive strategy.

Mary took part in the first three United Nations conferences on the status of women: in Mexico City in 1975; in Copenhagen in 1980; and in Nairobi in 1985. Having represented ATD at several UN conferences myself, I was impressed with her tactics. At the first conference, ATD was not allowed to address the diplomats formally. So instead Mary and another volunteer — who could not afford a hotel and were staying on a friend’s couch — began to canvass the five-star hotels where diplomats were staying. They convinced dozens of waiters and chambermaids to help distribute ATD’s statement on banquet tables and in bedrooms. Mary met hundreds of women from around the world and corresponded with them in the following years laying the ground for the Forum on Overcoming Extreme Poverty.

For the Copenhagen conference, she was invited to make a formal speech. She described three kinds of exclusion faced by women in extreme poverty:

“First, they are excluded from the ideas flowing among us —  ideas that give us our identity and our strength, the conviction of our rightful place in the world, and of our contribution to equality, development, and peace. Second, these women are excluded from new living patterns. Development brings new standards of living and new standards to live up to. It is perfectly possible and lawful for a mother in West Germany to see her children taken away on the grounds that she is illiterate and cannot care adequately for them. The third exclusion of these women is from human rights. […We must beware of creating new] standards against which women will be judged. The woman who is not educated, not in good health, not able to make the contribution she would like, and still struggling against all odds to bring up her own children must not be condemned as useless and worthless.”

“Solidarity means joining together to fight for the dignity of the poorest women, for their aspirations, for their liberation. In achieving theirs, we will achieve our own.”

Mary’s speech convinced the conference to adopt a resolution put forward by ATD Fourth World to ensure that all development projects take the needs of the poorest women into account; and that government reports to the United Nations about the status of women include particular emphasis on the progress made with regard to women in extreme poverty.

The vast majority of Mary’s writings are addressed to Wresinski or to various members of ATD’s Volunteer Corps. Some of her most striking words, however, come from an interview conducted by Mr. Titinga Frédéric Pacéré, an award-winning poet from Burkina Faso. Following Wresinski’s death in 1988, Mr. Pacéré felt it was important to learn from the extraordinary people who were the founder’s closest collaborators. When Mr. Pacéré spoke with Mary in 1991, she told him:

“We volunteers couldn’t hope to help if we became stale intellectually. If we let ourselves wallow in miserable feelings about the misery of poverty, we’d stagnate and become stunted with nothing left to offer anyone. In order to offer something to families in poverty, we had to convince them that they deserve to be part of the world. They deserve paintings and music. They deserve the stars, and everything on earth. […] We invited them to use us volunteers for whatever they dreamt of accomplishing. These families could invent their own projects and change their destiny.”

To make known Mary’s thirty years of action alongside people in extreme poverty, I am now writing a book called Joyous Revolution: The Girl from Guildford and People the World Forgot. [Publication pending] Paul Maréchal is another ATD Fourth World volunteer who has been motivated to spread Mary’s story. Thanks to his artistic talent, we have begun excerpting several chapters to present them with visual animation.