Dignity in the Face of Extreme Poverty 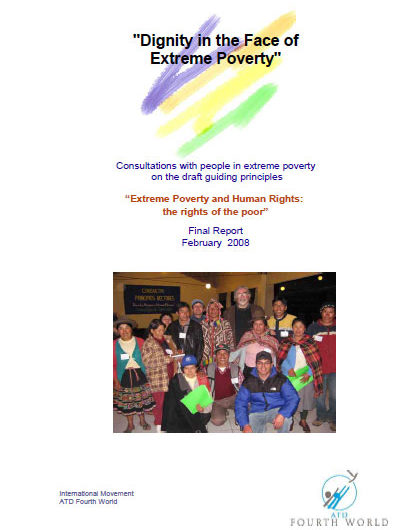 The International Movement ATD Fourth World publishes its report on consultations with people in extreme poverty on the draft guiding principles “Extreme Poverty and Human Rights: The Rights of the Poor”

On 24 August 2006, the United Nations’ Sub-Commission on the Promotion and Protection of Human Rights adopted draft guiding principles entitled “Extreme poverty and human rights: the rights of the poor.”

On 17 November 2006 in Geneva, the Human Rights Council requested that the Office of the United Nations High Commissioner for Human Rights “ circulate the draft guiding principles in order to obtain the views of (…) non-governmental organizations, especially those in which people in situations of extreme poverty express their views.” (A/HRC/RES/2/2).

This report is based on consultations with people living in poverty and extreme poverty, and of NGOs committed alongside them. These consultations were organized by the International Movement ATD Fourth World in: Lille (France), Cusco (Peru), Kielce (Poland), Dakar (Senegal) and Bangkok (Thailand). It is also based on exchanges with other members of ATD Fourth World, particularly in Geneva (Switzerland), and with the organizations that are members of the Permanent Forum Against Extreme Poverty in the World.