Home > What we do > Mobilizing Society > World Day for Overcoming Poverty

October 17 is the World Day for Overcoming Poverty*. This date is officially the International Day for the Eradication of Poverty at the United Nations. Social media refers to October 17 as end poverty day or stop poverty day.

The World Day for Overcoming Poverty is a platform for people living in poverty and extreme poverty to speak out about their lives and their struggles against poverty. In the words of one participant,

“It’s our day. We can say what we have in our hearts without shame or embarrassment.”

In 1992, the United Nations officially recognized October 17 as a world day. The day was first celebrated in 1987. ATD Fourth World’s founder, Joseph Wresinski, led over 100,000 people at the Human Rights Plaza in Paris, France. At this time the unveiling of a commemorative stone took place. Engraved on it was the same text as stones subsequently laid at the United Nations offices in New York, at the European Union offices in Belgium, and in other places around the world:

Each year, in schools, in public squares, in town halls and cultural centers, at the United Nations, and in the heart of villages, ordinary people come together around the experiences of people living in poverty. Each place commemorates the day differently. This may involve debates, art exhibits, workshops, stories for children, or musical performances.

*It was originally known as the World Day for Overcoming Extreme Poverty in English. 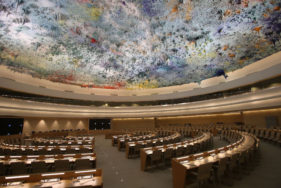 Above: United Nations Human Rights Council meeting room in the Palace of Nations Geneva. Bringing the voices of people in (…) END_OF_DOCUMENT_TOKEN_TO_BE_REPLACED 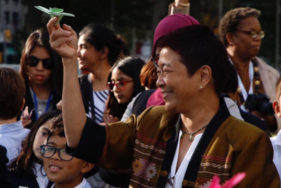 Above:  Aye Aye Win at the UN on October 17, 2022 By Aye Aye Win, President of the International Committee (…) END_OF_DOCUMENT_TOKEN_TO_BE_REPLACED