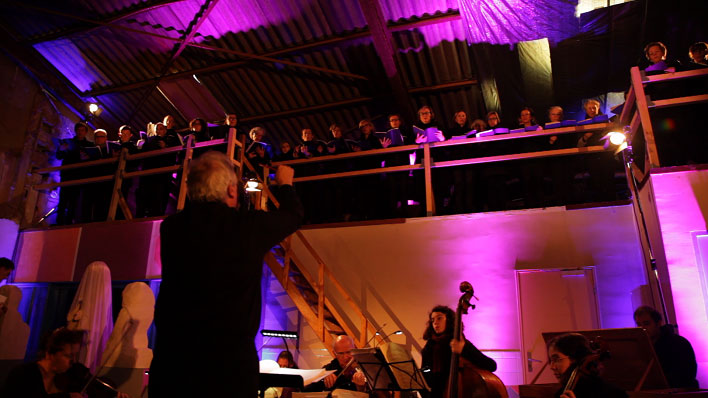 On Friday 11th November 2016, 60 years and a day after the arrival of Joseph Wresinski at Noisy-le-Grand homeless camp, a concert of classical music was performed by Jubileo in ATD Fourth World’s centre in Noisy near Paris.

This concert was the first of a series of concerts performed all over the world this year, within the frame of the Stop Poverty campaign which invites people to Join our Voices to say #StopPoverty!

The Jubileo choir performs regularly in places where classical music has little space (prisons, hospitals and last year, the “jungle” in Calais, France), so that everyone has the opportunity to listen to beautiful music. For a large number of the people who came, it was their first time to attend a classical muscial concert.

The event was welcomed by ATD Fourth World’s solidarity economy society: Working and Learning Together (Travailler et Apprendre Ensemble). This was an occasion to remember that Father Joseph came to the camp for the first time in July 1956 before moving permanently on 11 November of the same year, and taking by surprise all the inhabitants of the camp in doing so.

As Marie Jahrling siad: “There were people passing by, but nobody stayed, they were afraid of the extreme poverty they were seeing and then, we saw Father Joseph coming in. We thought: he is going to leave too. But he stayed. Right away, he built on what we already did, but he also improvised. Little by little with him, things got organized!”

Sixty years later, 150 people, inhabitants of Noisy and its Family Promotion Center, gathered with the Jubileo musicians and singers to celebrate this anniversary. The concert, which featured Haydn’s Stabat Mater, interspersed with interpretations on the theme courage of the courage of mothers, was applauded for a long time and the finale played again in front of an enthusiastic audience.

Laurence Benezit, soloist soprano and organizer of the event, explained that Jubileo was deeply touched by Joseph Wresinski’s stuggle agains extreme poverty affirming:”Every human being is capable of transforming himself if we open the ways to knowledge.” For Jubileo too, music is not only for the elite but should be accessible to all:”All the children can be happy when they feel the strength of this music that is not just reserved for a few.”

Jubileo next partnered with the campaign for its official launch on 12 February 2017 in Angers, and again in Paris for the 30-year Anniversary of the Wresinski Report “Extreme Poverty and Social Insecurity“ (Grande pauvreté et précarité sociale).