Skip to content
Home > At the United Nations > Towards Sustainable Development that Leaves No One Behind: The Challenge of the Post-2015 Agenda

Towards Sustainable Development that Leaves No One Behind: The Challenge of the Post-2015 Agenda 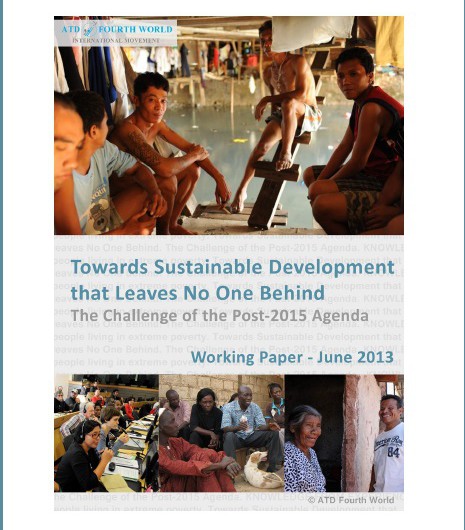 To feed into the evaluation process for the Millennium Development Goals (MDGs) coordinated by the United Nations, ATD Fourth World has launched its own participatory research project to assess the MDGs*. The aim is to ensure that people living in extreme poverty can contribute their knowledge and experience to the development agenda. Twelve of the countries in which ATD Fourth World has an active presence are involved in the project: Belgium, Bolivia, Brazil, Burkina Faso, France, Haiti, Guatemala, Madagascar, Mauritius, the Philippines, Peru and Poland. They reflect a geographical, economic and cultural diversity; and the inclusion of ’developed’ countries, like Belgium, France and Poland, emphasises the fact that chronic poverty exists around the world, not only in those countries targeted by the MDGs.

“Even in extreme poverty, a person has ideas. If these ideas aren’t recognized, people fall even deeper into poverty” (participant in the Ouagadougou MDG seminar). To understand the successes and failures of the current MDG agenda, it is essential to think together with people living in extreme poverty. This is both a matter of efficiency and a moral duty, since participation in public affairs is a fundamental human right. People living in extreme poverty see the day-to-day problems that arise from the current way development policies are designed and applied, and they have ideas on how these problems could be fixed. In each of the twelve chosen countries, ATD Fourth World teams have set up, with people living in poverty and extreme poverty, meetings grounded on the mutual trust built up over the years. The participants have met and discussed development issues through weekly or monthly meetings, carrying out interviews, learning how to voice their concerns and building a collective knowledge, over periods spanning from six to twenty-four months.

Depending on the countries, representatives of academia, NGOs, trade unions, civil servants from different ministries (education, social affairs, employment, professional training, etc.), and officials from international bodies such as the European Union, UNICEF, UNESCO, UNDP, OHCHR and the World Bank have met and prepared themselves for a dialogue with people living in extreme poverty – a dialogue requiring tactfulness, openness and humility.

These different groups have been brought together in national and international seminars that took place in Mauritius, Bolivia, Belgium, France, Madagascar and Burkina Faso. Around two thousand people, a majority of whom are living in poverty or in extreme poverty, contributed to the process. Each of the seminars aimed to produce an analysis of specific issues related to the MDGs, and a set of common recommendations for the post-2015 agenda. They are summed up in this working paper and will be brought to the synthesis seminar in New York, on June 26 and 27, 2013. They will be discussed and refined with relevant United Nations agencies and with ATD Fourth World’s other main partners such as ITUC, Social Watch, and others in the Beyond 2015 Campaign.