A Symbol of Our Humanity Throughout the World 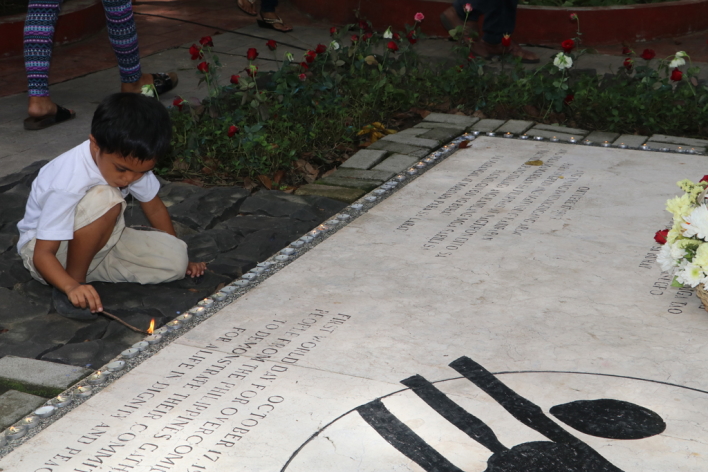 This story tells the history and significance of the Commemorative Stone in memory of people who resist extreme poverty. It was first displayed on 17 October 1987 in Paris and later replicated throughout the world.

In 1987, 100,000 people from all over the world demonstrated in Paris on 17 October to bring attention to extreme poverty. In the evening, a moving ceremony took place near the Eiffel Tower at a stone memorial. ATD had created the memorial in memory of all those who have suffered and died because of the injustice of poverty.

Since then, the United Nations has recognized 17 October as World Day for Overcoming Poverty. Around the world people mark this day with ceremonies at numerous similar memorials. Each memorial bears the words originally that ATD’s founder, Joseph Wresinski, spoke in 1987.

Huguette Redegeld, a member of ATDs Volunteer Corps, was present at the original demonstration and has attended numerous ceremonies over the years to mark World Day for Overcoming Poverty. In this article, she recalls some of the significant events that have occurred on that day since 1987.

I was like a child receiving a gift she had always wanted without really knowing it. I found myself amazed at the extent of what I was participating in with thousands of other people. There, on the Plaza of Human Rights and Liberties in Paris, we were all part of an enormous Commemoration in honour of people resisting extreme poverty. That was 17 October 1987.

In 1963, Joseph Wresinski put out a call for help from a shantytown outside Paris where he was living and working with people in extreme poverty.

His goal was not just to alleviate poverty, but to put an end to it.

I answered his appeal, determined to give my best effort to support this radically idealistic undertaking. However, I never imagined that one day in 1987 I would be standing near the Eiffel Tower, looking down at a giant marble Commemorative Stone engraved with words that made essentially the same appeal I had heard from him so many years ago:

“Wherever men and women are condemned to live in extreme poverty, human rights are violated. To come together to ensure these rights be respected is our solemn duty.”

It was a rallying cry asking the whole world to unite, a dynamic and timely appeal cast worldwide and addressed to everyone. Maybe that’s why thousands of people since then have stepped forward in answer to this invitation.

I remember 17 October 1989, two years after the inauguration of the Paris Commemorative Stone in Honour of the Victims of Extreme Poverty. People from all different backgrounds in Reunion Island organized to install a replica of the Paris Commemorative Stone. Choosing an iconic and culturally symbolic place, they had placed it in the city of Saint Denis on the plaza of the Champ Fleuri Theatre.

I remember 28 October 1992 when there was news that caused a bit of a stir. Cassam Uteem, then president of the Republic of Mauritius, was among the first to sign a petition launched by former UN Secretary General Javier Perez de Cuellar. The petition called on the United Nations to recognise 17 October as World Day for Overcoming Extreme Poverty. Fortunately, the petition was a success and the UN’s General Assembly adopted the resolution later that year.

I remember 17 October 1993 in the Philippines. A presidential proclamation declared 17 October National Day for Overcoming Extreme Poverty. That day, at Rizal Park in the heart of Manila, a newly inaugurated replica of the Commemorative Stone inspired a large and diverse crowd from all over to come together. Soon after, replicas of this monument were created in other areas of the country as well.

I remember 17 October 1996, the official United Nations International Year for the Eradication of Poverty. Since 1993, people from diverse backgrounds had been gathering at the UN — an institution created to promote human rights — to demonstrate their commitment to ending poverty. Then in 1996, the French Government presented the UN with a replica of the Paris Commemorative Stone. Engraved on it was Joseph Wresinski’s original appeal translated into the UN’s six official languages.

That same year in Manega, Burkina Faso renowned lawyer, author, and storyteller Titinga Frederic Pacere constructed near his museum what he called “the African Commemorative Stone”. There, on a huge, horizontal, continent-shaped monument Joseph Wresinski’s message appears in several African languages. Every October young and not so young people march there together from the capital city of Ouagadougou.

A few years later in 2004, the Republic of Mauritius set up a replica of the original Commemorative Stone in front of the famous Port Louis Waterfront. An original artistic creation, the monument  symbolises water, a precious resource that all humanity shares.

50 Commemorative Stones around the world

I have so many other memories that all lead me to ask myself how it is that today there are more than 50 replicas of the original Paris Commemorative Stone throughout the world, and that even more are in progress. They are all different. Some lie in the ground and others hang on walls. In some places, these replicas are  in symbolic locations and others are crafted as art pieces. Elsewhere, they are adjacent to international institutions or hanging in a town hall. Some stand beside monuments of historical or cultural significance and others are in a place of contemplation or a cultural centre. All are full of history, remembrance, struggle, and spirituality.

“These monuments lift us higher”

I don’t have an answer to these questions, but rather a conviction. The Commemorative Stone to the Victims of Extreme Poverty and all its replicas around the world respond to our desire for unity, our thirst for peace and harmony, as well as our quest for justice and solidarity. On each monument appears Joseph Wresinski’s call to action lift us higher. They awaken what is best in us. They are truly part of the world’s heritage, a powerful statement of our common humanity.