Skip to content
Home > Latin America and the Caribbean > Mexico > An Act of Charity, Justice, or Humanity?

An Act of Charity, Justice, or Humanity? 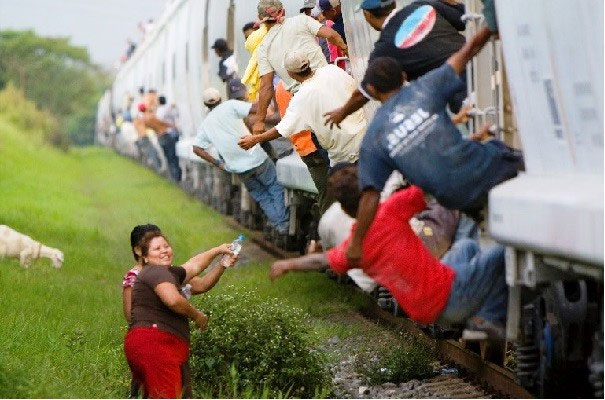 A group of young women draw on their limited resources to respond to the plight of migrants.

More than twenty years ago, a group of young girls asked their parents, who were farm laborers, about the people who traveled on top of the cargo train that crossed Mexico from south to north, the train that always passed near their community, La Patrona. “Who are they? Where do they come from?”

They couldn’t have imagined that the questions they asked as young girls would, years later, inspire their becoming “Las Patronas de Veracrus,” or The Patrons of Veracruz.

They weren’t aware then that they would bear witness to one of the most complex issues in society today: “migration — not as a right, but as a privilege for those who can pay.”

Years later, these same girls, now young women, were walking near the train tracks, carrying a bag of bread and milk. Suddenly, one of the travelers above the train asked what they were carrying. The girls, hearing the call, threw their bag towards him wanting to help. “We had understood, surprised, that the travelers were hungry,” they tell us now. And so began their story.

After that, these young women and others from their families decided to get together and organize themselves. They were rural girls who lived in a community that did not stand out for its material well being.

Nevertheless, they decided to act, fully aware that they would receive nothing in return, and knowing that this decision would mean sharing their meager daily purchases, meant to feed their own families.

“Those people are hungry,” one of them said. “What are we going to do?” “I’ll bring a kilogram of rice,” another said. “I’ll being beans.” “I’ll bring the tortillas.” And so, sparing no effort, and with great bravery, they rushed to alleviate hunger.

From that moment on, the women would stop and stand along the tracks every day. They brought carts that carried bags of food they had made: some rice, beans, tortillas, bread and, above all, bottles of water. Every bag prepared with care. Every bag a symbol of deep solidarity.

The train, packed with migrants, approaches at high speed. The sound is hair-raising. They need a great deal of concentration because even the smallest mistake could have grave consequences for them or for the travelers. The women are ready, their arms held up and their hands full of bags of food and water. The migrants, perched on the stairs of the train, grab what they can. Usually the conductor doesn’t slow down. But in a matter of seconds the women’s incredible agility and determination allows them to cover the majority of the train carriages, offering a little bit of relief to those who have gone several days without food.

Amidst the racket of the train, the migrants yell out “Thank you!” “God bless you!” The women, with a sigh of relief, smile for an instant and watch as “la bestia,” or “the beast,” moves away, continuing on its course with the same tumultuous sound.

These are not regular passengers. How many will arrive at their destination? How many will be left behind along the way? All of them, even the youngest, have a life story with hopes and dreams. During this uncertain journey, some of the passengers will be assaulted. Some, exhausted from the travel, will be mutilated in their sleep or die falling from the train. Others will be kidnapped or murdered.

The women don’t let themselves be discouraged when the beast has passed. They take their empty carts and walk back to the community to get ready for the next day. They have been alleviating hunger without fail every day for almost 22 years.

Just a few weeks ago, I went with two friends to meet Las Patronas at an event in Mexico City organized by The National School of Anthropology and History. They were showing the documentary, Heroes Cotidianos, or Everyday Heroes, which talks about Las Patronas. At the end, there was absolute silence in the auditorium. You could feel the incredible emotion of the young university students and professionals. Nora Romera, one of the young women responsible for Las Patronas, introduced the discussion following the movie, insisting, “It should hurt us in the deepest part of our humanity when we see someone suffer.”

Today, the group is made up of more than fifteen women. Over time, they have enriched their bags of food with a can of tuna, some sweets and some pastries. Las Patronas don’t want to become an NGO. They don’t want to receive funds from the government or political parties. “We want,” explains Nora, “to continue being what we are. We want to keep working with what we have so we need to give it a lot of commitment and enthusiasm!”

A shiver of admiration and hope ran through me as I listened to her story. I wondered if her labor would represent an act of charity, of justice, or of humanity? I thought of the meaning of those words. But, above all, I had learned that whatever the meaning of those words, any act of rebellion against suffering starts the moment we decide to take a step, no matter how simple. It starts when we decide to act with a mixture of humanity, justice, and intolerance for suffering.

Nora continued addressing the auditorium: “We didn’t have the good fortune to study at university, and because of that I speak simply, without complexity. We have acted simply; we have acted out of humanity.”

One of the participants said, “That simple action of offering tortillas and beans is a response to the unconditional right to eat every day.”

“What can we do?” asked another young university student. “Be good professionals,” Nora responded. “We must be more human. It’s not enough to study. We need new and humane ideas. The majority of the people that ride “la bestia” are young people like you,” she said.

“For me,” she continued, “one of the solutions to the complexity of this type of migration begins in our communities where we live, where we learn, and where we must be creative when we decide to do something.”

We can all find inspiration in the story and admirable work of Las Patronas de Veracruz. As Nora said simply, “We have to react with humanity and decide to do something!”