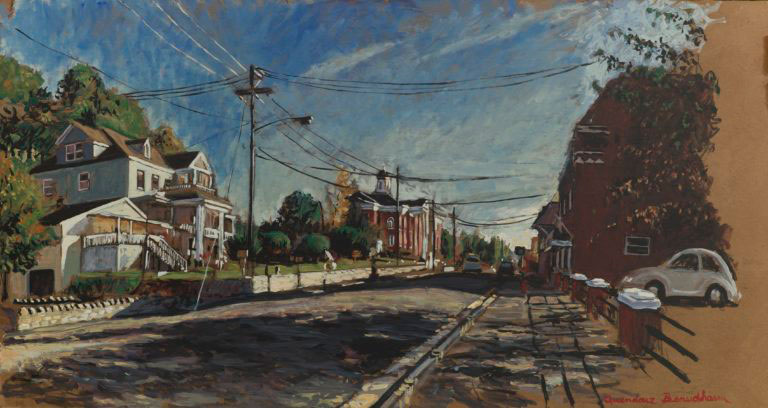 “Painting is a medium for meeting people,” reflects artist Guendouz Bensidhoum from a makeshift studio at a community center in the rural Southwest Virginia town of McClure (USA). “It also brings an atmosphere of peace.” Guendouz is a member of the ATD Fourth World Volunteer Corps from France. He spent three months with ATD’s Learning Co-op team in Dickenson County, VA, in the heart of Appalachia. There he learned from local people while painting with and for them.

Writing about his experience, Guendouz indeed paints a picture of the area, but more so of the people who so warmly welcomed and engaged him: directors Mary and JR at Binns-Counts Community Center who arranged a front-window room for Guendouz to paint; Jarvis from Clintwood who stayed an entire day to paint in memory of his ex-wife who had died; Rex, a musician and guitar maker who built his own house; Jean, who readily facilitated meeting others at her assisted living center; seniors gathered in the former mining town of Clincho, and even 3- and 4-year-olds at the Head Start in Haysi.

My first impression of Appalachia was the isolation of the people. Small communities are cut off from each other. …Each week I painted at the Binns-Counts Community Center…We learned to communicate even with my limited English. …I appreciated the fact that the Binns-Counts staff and volunteers would ask me to have a meal with them. JR especially made sure I had everything I needed and that the room was warm when I came. He would bring people in, stay himself for long periods of time, and say, “Good job!”

“With its hills and creeks, the region is very beautiful. I had never seen before such colors as those in the forests in autumn there. Despite the mines and dumpsites, the pollution of the air and the waters, I keep the image of beautiful nature…”

Guendouz was also impressed, as well as thankful, that local people, young and older, were eager and “dared to paint something.” Limited in spoken language, and only staying a short time, Guendouz used his artistic talents as a way to engage with others, bring out their self-expression, and highlight the strengths of the region.

People told me they could see their region in a different way through the paintings. Throughout the three months I could sense how important art is for people. … It confirmed that ATD Fourth World is right to invest in creativity, art, and culture with people in lively and concrete ways.

The works Guendouz created with area residents were displayed at the local Clintwood Public Library. Read the full article about Guendouz’ time with people in Appalachia.

More information on ATD’s work in the United States.

More information on ATD’s work around access to art with people in poverty.