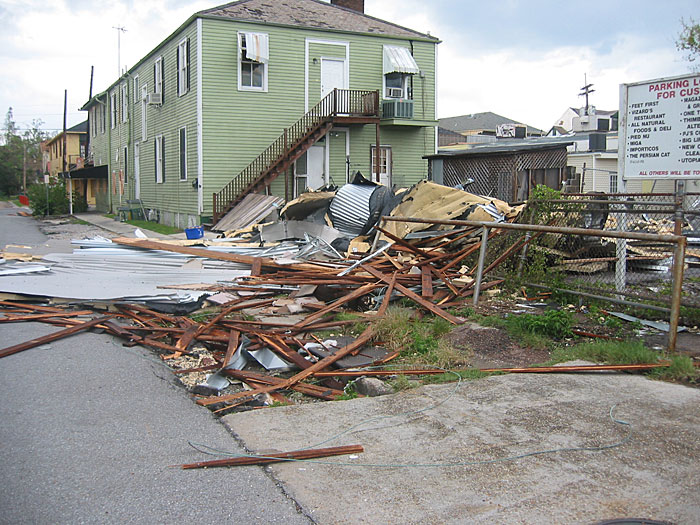 Above: Destroyed home in the United States.

For many years, ATD Fourth World has been active in the United Nations Commission for Social Development, bringing the ideas and experiences of people living in poverty to plenary sessions and smaller conferences. This year, the Commission took place from January 29 to February 7 and its theme focused on “Strategies for eradicating poverty to achieve sustainable development for all.” There, ATD members were invited to be speakers at two side-events to share the perspective of people living in poverty on homelessness, climate change, and other issues.

A Systematic Approach to Eliminating Homelessness

Patrick Lubin, ATD Fourth World Human Rights Activist, delivered a powerful speech, sharing his story of homelessness at the first side event entitled “A Systematic Approach to Eliminating Homelessness,” organized by the Vincentian Family and the Permanent Mission of Ireland to the United Nations. The goal of this gathering was to learn how homelessness affects those who experience it, and to consider how partnerships could address the problem.

Mr. Lubin explained that discrimination against the homeless is a major obstacle to accessing their rights. When an individual cannot find shelter, a place to stay for the night, or a permanent accommodation, it is his or her Right to Adequate Housing* that is violated. When looking for homes people experience discrimination because they don’t have previous credit or job history, or recent references from landlords. When they can’t find accommodation or help, homeless people have to find solutions by themselves. Many end up staying on the streets in places that can become very dangerous at night. In his speech, Mr. Lubin stated that the human Right to Adequate Housing means more than just having four walls and a roof. It is the right of every person to have a safe and secure home in which to live in peace and dignity. Feeling safe is a major concern for people facing homelessness, he explained.

Being homeless directly impacts his health, Mr. Lubin said. “When you don’t lay down like me for months or years, you get problems with your health. […] The less you are sleeping, the more it affects your whole body. That’s why my legs and feet were so swollen. I cannot get to my shoes or tie them. In the subway, when you see the legs of the homeless people, they are always so swollen. That’s how we recognize each other.”

Another challenge faced by homeless people is finding clean drinking water. This is a direct violation of the right to water, sanitation and hygiene.** “People need to understand that to not have access to clean water is very dangerous because if you don’t drink, you get problems with your health. But if you do drink water, you don’t have access to a bathroom. Why do so many subways close their bathroom at night?”

“I don’t want you to define me as just a homeless person. I am who I am and I think what’s important is to send this message. It’s a very hard situation, but I am not my situation. It is possible to survive and get out of this trouble.”

Mr. Lubin also suggested ways to support people who live in poverty or experience homelessness. One of his central recommendations was that people living in poverty should become partners in building expertise to inform social policies so that these policies are both effective and based on human rights. At the local level, reforms to social services and the shelter system could benefit from the experiences and ideas of people living in poverty.

For example, Mr. Lubin mentioned that the only thing he was able to buy with food stamps is cold food: “I’ve been through three winters almost without warm food […] We cannot buy hot food and we cannot buy prepared food. We are losing power and energy; we are losing capacity for conversation.”

One direct recommendation based on this experience is allowing homeless people to use food stamps to buy hot food, especially during harsh winter times.

Poverty: A Threat to Democracy, Human Rights, and Climate Change

Dr. Geneviève Tardieu, head of advocacy for the International Movement ATD Fourth World, was a keynote speaker at a second side-event entitled “Poverty: A Threat to Democracy, Human Rights, and Climate Change. ” The event was organized by the United Nations Development Program (UNDP) and the Organization for Poverty Alleviation and Development (OPAD), a Sweden-based NGO. Her talk looked at the connections between human rights and extreme poverty, as well as climate change and the vulnerability of people in poverty to its increasingly devastating effects.

Many people consider poverty and inequality to be the greatest threat to democracy and human rights. Citizens frequently lose faith in democratic institutions when they feel they do not benefit from them. Often people living in poverty are victims of discrimination and injustice, and yet have no access to legal redress. Dr. Tardieu asserted that extreme poverty is both a cause and a consequence of human rights violations. Families in poverty often make tremendous, yet unrecognized, efforts to access human rights. A first step towards making these rights available to all citizens would be providing equal access to equal education. A strong investment must also be made to promote equal access to, and participation in, all democratic institutions.

In relation to climate change, Dr. Tardieu pointed out that people living in poverty are often the first victims of climate related changes. They bear the heaviest burden of these effects because they are most vulnerable to environmental degradation. In addition, uneven development processes lead to inequality and increased vulnerability to climate change. Therefore it is important to focus development efforts on the bottom 20 percent of citizens. Climate-change finance should be directed to the most vulnerable populations. Climate change monitoring should give particular attention to vulnerable communities. Finally, Dr. Tardieu insisted that it is critical also to involve people in poverty in efforts to reduce climate change and alleviate its effects.

Through contributions like these, the International Movement ATD Fourth World ensures that the Commission on Social Development and other UN institutions can hear about the ideas and interests of the most vulnerable people, whether they live in Haiti, the United States, the Philippines, or other parts of the world. Extreme poverty exists everywhere. Its multidimensional nature requires a deep understanding of the experiences of people who endure it every day. Only through partnership with these people can governments and institutions begin to understand and address this intractable problem.

* Stated in article 25 of the Universal Declaration of Human Rights, the right to adequate housing has been codified in other major international human rights treaties such as Article 11 of the International Covenant on Economic, Social and Cultural Rights which provides that “States Parties to the present Covenant recognize the right of everyone to an adequate standard of living for himself and his family, including adequate . . . housing, and to the continuous improvement of living conditions.”

** In 2010, the UN General Assembly recognized in its Resolution 64/292 “…the right to safe and clean drinking water and sanitation as a human right that is essential for the full enjoyment of life and all human rights”.