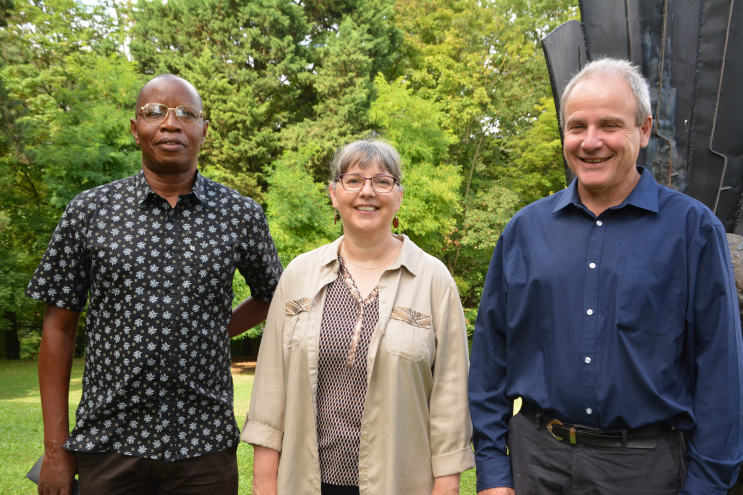 A new International Leadership Team (ILT) started its four year term on October 18, 2021. The team includes Bruno Dabout as Director General, as well as Chantal Consolini-Thiébaud and Martin Kalisa as Deputy Directors. After seven months consulting with ATD members around the world, a diverse 23-member committee chose the new leaders.

With ATD’s Board of Directors, the ILT is responsible for the cohesion of all planning, projects, and public messages. Key to the team’s work is ensuring that members living in extreme poverty remain at the heart of all activities. In addition, the ILT helps to spark creative initiatives and to support all ATD members, particularly Volunteer Corps members.

Bruno Dabout
Bruno first encountered ATD Fourth World through Tapori when he was a business school student in Lille, France. In 1979, he helped with ATD Fourth World’s “All Friends Learning Together” campaign for the International Year of the Child.

Bruno is passionate about education and the economy. Motivated by his desire to transform society alongside people experiencing extreme poverty, Bruno joined the ATD Fourth World Volunteer Corps in 1983. With his wife Pascale and their two children, Bruno has lived in disadvantaged neighbourhoods in Thailand, the United States, and the Paris region of France.

Bruno has been responsible for projects with children, young people, and families living in poverty. He has contributed extensively to ATD Fourth World’s administrative and financial development, establishing evaluation programmes with ATD teams throughout the world. In addition, he has worked with international ATD teams to implement the organisation’s Strategic Ambitions. With a focus on partnership with people in poverty, these priorities aim to build a just and sustainable world that leaves no one behind.

Chantal Consolini-Thiébaud
Inspired by Joseph Wresinski’s words during the first World Day for Overcoming Poverty in 1987:

“And you, young people, who are impatient for justice and for the truth. What are you going to do in your schools, in your universities, and in your youth clubs?”

Chantal became an ally in Besançon, France where she was studying geology. Her work with ATD, as well as what she learned from Volunteer Corps members and other allies, led her to join the Volunteer Corps herself in 1995.

In the Volunteer Corps, Chantal discovered how ATD Fourth World is truly an international organization. In two French cities, Marseille and Lille, Chantal worked with families living in deep poverty. Her ATD team partnered with other organisations working to involve those in extreme poverty in neighbourhood projects where no one is left out.

In Switzerland, Chantal served as a member of the Tapori international coordination team. Through her contact with children around the world, Chantal saw how they often take the initiative to build peace and friendship among themselves, even when both seem impossible.

Returning to France, Chantal spent six years running an ATD Fourth World People’s University near Paris. At the same time, she took part in ATD’s international research project on the Hidden Dimensions of Poverty. Working alongside ATD Fourth World activists, Chantal experienced the challenge of being a co-researcher on equal footing with academics and other professionals.

Prior to joining the International Leadership Team in 2021, Chantal helped coordinate ATD’s regional work in Europe. There she saw the eagerness of ATD Fourth World members across Europe to meet together and to encourage one another in their struggle to overcome poverty.

Chantal comes from a small village in eastern France, near the border with Switzerland. Growing up there, she experienced the solidarity of rural communities and developed a strong bond with nature. Chantal and her husband Emmanuel have two children.

“It is thanks to their support and that of my family–my father, my sisters, and my brother–that I have been able to devote myself to such a range of positions with ATD Fourth World”, Chantal explains. “This work has been central to my life for more than 35 years. It is with a mixture of enthusiasm and fear that I am joining the new International Leadership Team. I will try to live up to your trust”, she said, addressing ATD members. “But to do that, I will need all of you.”

Martin Kalisa
Martin first learned about ATD Fourth World when he was in Belgium doing academic research on immigration. Martin’s painful experience living through the Rwandan genocide had left him with a deep appreciation for human dignity and what it means to be deprived of it. Given ATD’s focus on respect for the dignity of all people, he soon joined as an ally.

In 1999, Martin and his wife Glycella both became ATD Volunteer Corps members. In Belgium, Martin supported the French-speaking ATD Fourth World People’s University. Then in 2004, Martin and his family moved to Great Britain to work at the Frimhurst Family House. There he discovered to what extent the right to live as a family was denied to those hardest hit by poverty. Motivated by his commitment to this issue, he completed a PhD thesis on the criminalisation of poverty in the UK. In 2008, he joined ATD Fourth World UK’s national coordination team.

In 2014, Martin became part of ATD’s regional coordination team for Africa. Since then, he has lived in Senegal, Kenya, and Rwanda. After thirty years away, he rediscovered the harshness of poverty in Africa. At the same time he saw how, even in extreme poverty, people make tremendous efforts to give their children a better future. During his many years with ATD, Martin has realized how the suffering caused by extreme poverty crosses linguistic, cultural, and ethnic barriers.

Despite the many challenges Africa faces, Martin agreed to join the International Leadership Team in 2021 because he believes ATD Fourth World is a family beyond borders. He is humbled by the responsibility he now faces and counts on the support of all ATD members.