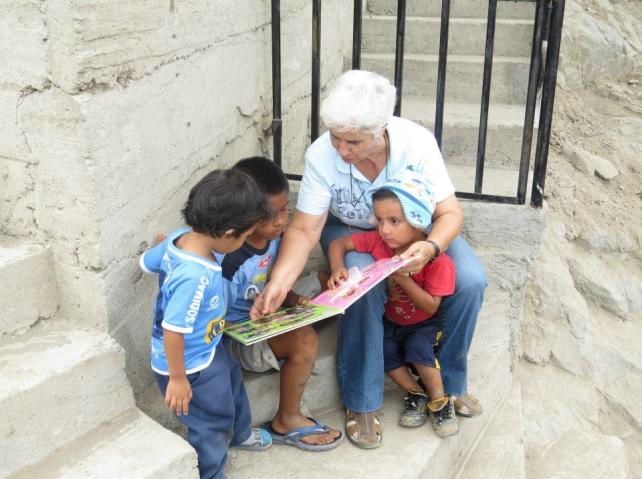 Every week in Lima, Peru, ATD Fourth World organizes Street Libraries so that children from disadvantaged neighborhoods can discover the pleasure of reading. By facilitating access to culture, these Street Libraries are also a counterpoint to the exclusion and discrimination linked to poverty. ATD Fourth World volunteers use books as a communication tool, allowing them to better know the families living in the hills above Lima. Victoire Rocher visited Peru with “France-Volunteers” (a program that allows French young people to discover different types of volunteering). Here, she recounts what she discovered.

In April, I accompanied Jasmani and Walter, of ATD Fourth World, to the Street Library in Cerro Vista Alegre Valdiviezo in San Martin de Porres. After traveling by two different vans and then making a short walk, we arrived. The view is magnificent on top of the hill, which overlooks Lima. In Cerro Vista Alegre Valdiviezo, the ATD team is able to use a small community room for the activities. Each ATD volunteer came carrying a backpack filled with books and art supplies. While Jasmani began setting up, I went outside with Walter to climb further uphill to invite kids to participate. Every member of the ATD team knows all of the children’s names. Little by little, we see the children’s heads start popping out as they come out of their homes to greet us warmly and enthusiastically. The ATD volunteers reassure all the parents, promising to walk the children home again afterwards.

Now that the children have arrived, the Street Library can begin. It starts with reading time. The older children and the adults help the younger ones read. Puzzle and interactive books are among the more popular choices. The children exchange books with one another, and some even want to take more than one book at once! However, the Street Library does have some rules, one of which is, “One book at a time, and everyone gets a turn!”

After reading time, we form a circle and sing together. A story is then told to the children, before the Street Library ends with a painting activity based upon the story. All children — small, medium, and big — are given different tasks, according to their age.

ATD’s grassroots work is geared to allow people in extreme poverty to exercise their rights and to overcome poverty. Street Libraries are a major ATD Fourth World activity. Through Street Libraries, ATD aims to break social and cultural exclusion in disadvantaged neighborhoods, by making culture easily accessible and giving confidence to children in extreme poverty. ATD Fourth World is present in more than 100 locations worldwide, operating in thirty countries. In Peru since 1991, ATD works in both urban neighborhoods and rural communities where extreme poverty is present.

One of the most important aspects of this type of activity is its regularity. For the inhabitants of disadvantaged neighborhoods to be able to count on it creates a real connection among all participants. Street Libraries aim to enhance the knowledge transmitted within families and communities, and also to stimulate curiosity and the joy of learning. This access to knowledge helps to unlock hidden potential and creativity, restoring confidence in individuals that anyone —even themselves — can learn.

Being an ATD Fourth World Volunteer

ATD is based on voluntary commitment. Full-time Volunteer Corps members commit to working in the long term living alongside people in extreme poverty. In total, there are approximately 400 of these volunteers worldwide. They receive only a small stipend to live on in order to be true to their commitment. The “allies” or friends of ATD Fourth World include those regularly involved with ATD, but who are not full time. These allies seek to challenge their own neighbors or colleagues to reduce social exclusion and injustice.

In Lima, ATD’s activities are led by volunteers and allies. In 2013, with the support of France Volontaires, ATD-Lima hosted two young people from the Caribbean island of Martinique. Their activities include academic support, enrichment activities for toddlers, and assistance in preparing and facilitating Street Libraries.

Through ATD, I spent ten months working in Peru with a French national civic service contract. I spent the first six months in Nazca at an association where I taught French and English. After Nazca, I went to Lima where I finished my stint. After observing for the first two weeks, I already felt integrated into the ATD team. Working almost every day, I did a range of tasks – I participated actively in all meetings, helped with preparing and running the Street Library in Valdiviezo and Vizcachera de Campoy, helped students with their homework, and provided daycare services for mothers when they participated in family craft workshops in cerro Vista Alegre de Valdiviezo à San Martin de Porres.

At first I was shocked by the conditions of the families living in the hills. Yet despite the difficulties the families lived in, I was pleasantly surprised and impressed by the affection and recognition that the children of the Street Libraries showed the ATD volunteers. I greatly admire two religious sisters, who despite being in their 70s (!), climb up the hill to and lead the Street Library every Friday. Despite the challenges, it has been a really great and rewarding experience to work with the ATD team each and every day.