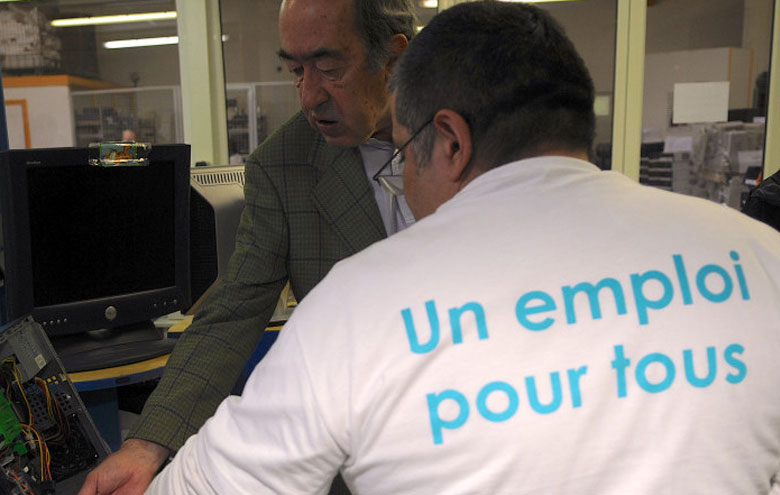 TAE (Work and Learn Together) is an ATD Fourth World cooperative in Noisy-le-Grand, France. It employs about twenty people in jobs like refurbishing computers, cleaning, and remodelling buildings. The company could just as easily have been called “Learning to Work Together”, which is its main goal. Since its start in 2002, TAE has acquired a wealth of valuable practical experience. This year, TAE is trying out eight training programs focused on teaching human resources workers and managers how to create create more inclusive companies that value and enhance human capital, above all leaving no one behind.

The first training program, “Defining the Vision and Meaning of Work,” was held last February in TAE’s production site workshops, following an inaugural conference in January.

“It isn’t the destination but the journey.”

The training program brought together participants from many types of companies all over France. Many were from “experimental companies” or “EBEs” (French companies where employees are paid in part through their unemployment benefits). Other participants came from “Zero Long-term Unemployment Zones” and the European telecommunications giant Orange. Following a warm welcome with coffee in the TAE kitchen, there was a guided tour of the workshops to give people a concrete picture of what they were about to discuss.

The range of people and companies was a reminder that the work world is varied and that common denominators must be found among, for example, a businesses offering a few hours of work per week to people living on the street, small businesses of around twenty employees like TAE and EBEs, and multinational corporations with several thousand employees.

The interactive training format allowed TAE employees and managers to speak for themselves and to participate in discussions on an equal footing. TAE employees talked about their past and current experiences both in work and in life. They spoke openly about their apprehensions and doubts, as well as positive experiences with work. TAE is not trying to sell a ready-to-use recipe, they explained. Rather TAE’s experience shows that it is important to establish a generally more democratic workplace where management supports more than just production efficiency and profitability.

The Meaning of Words and Work

Guillaume, a business leader and Chairman of the Board at TAE, set the tone for discussion by suggesting that, “it is easier to think about work if we remember our initial vision and the underlying meaning of what we do in the workplace. Recently, we have seen a transformation in business. The vision is more centred on “the why”. Why does a business exist? There has been a return to examining the origins of business initiatives.”

Training Program participants worked in peer groups (TAE, EBE, and traditional businesses) to discuss the “why” of their business and to think about the question, “What makes me, and possibly my colleagues, want to go to work every morning?”

Answers to this question shared common elements, such as pride in one’s work, a feeling of being helpful, and personal fulfilment through positive relationships with colleagues. “Working at TAE”, one participant said, “also means working with people I feel connected to, building something together, being part of the company, belonging to a group.”

However, the people who had experienced exclusion or humiliation in the working world had a different perspective than others with stable positions of responsibility that provide job security. Some employees said, “TAE is a social security service. There is a stability, a sense of safety.” Participants who came from more traditional companies valued risk-taking and the act of “putting themselves in danger.”

All the groups addressed issues of money, production, turnover, and wages. Didier, the TAE director, admitted that every morning he examined turnover. One of the employees emphasized that solidarity among employees “[…] is also when, if you become more productive, your colleague becomes less so compared to you. We have to accept … that people are paid the same whether they produce a little or a lot. At first, it was very hard for me. But it has made me more human, more tolerant.” Didier added that a company is more productive when everyone feels good. TAE as a “social integration enterprise” is 80% self-sufficient, much more than the average of similar companies in France.

The training also addressed practical issues: at TAE, what policies and procedures were put into place to build a work collective that does not exclude anyone?

At TAE, everyone’s job is almost guaranteed through a contract with no definite end date, but also through personal concern about employees. If an employee is absent from work, someone calls or visits to check in, without criticism for missing work. The Board of Directors spends a good deal of time discussing these issues. They look at the employee’s health care situation and possible difficulties with housing, family, schooling, debts, etc. They determine how they can best support the employee who is not showing up for work. Describing her own experience, one woman explained that, even if someone is absent for several months, the people at TAE make the employee feel like there is always a place for them. One of the directors added, “This is because, at TAE, we have policies and procedures to be sure it occurs. It doesn’t just happen”.

Discussing the relationship between management and employees, co-director Pierre-Antoine said, “We weren’t sure if Didier would have time to do tasks like housekeeping. He doesn’t have much time, but we wanted to set an example.” “For me,” Didier explained, “it is more a question of equality than of setting an example. I don’t do it to set an example. Rather, I do it to be on an equal footing with [the other employees].” He stressed that, “The biggest change is letting go. Control comes over time rather, than at the beginning.” Everyone is responsible for his or her own work, even if no one is ever left alone in the workshop or on a construction site. Over time, team leaders have become technical advisors.

Of course TAE experiences conflict, just like any other workplace. The balance between equality and respect for differences “is… something that we live [with every day]. We are always tempted to point out to a colleague that he is not working enough. We are still working on this issue. What helps is to keep other people in mind and to remember the goals of the project: working and learning together.” In the case of a conflict, management does not systematically intervene. Because of TAE’s effective policies and democratic corporate culture, the collective often sorts out these conflicts by itself.

The training program concluded with participants describing what they had found helpful and talking about practices they planned to suggest to their respective companies. Participants did not feel that implementing these practices on a larger scale would present a problem. One director of human resources pointed out that even a large company is made up of a multitude of smaller departments that could apply TAE’s procedures and practices.

ATD’s efforts to create more democratic and supportive workplaces and to share lessons learned can be seen the “Miasa Mianatra Miaraka” (MMM) projects in Madagascar and “Trabajar y Apprendre Juntos” (TAJ) in Guatemala.