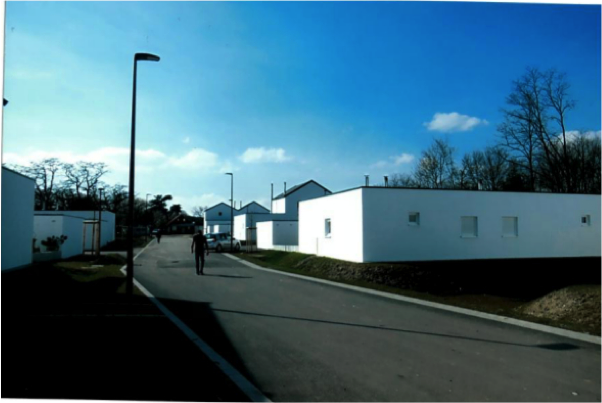 In 2017 ATD Fourth World invited people around the world to document real-life “Stories of Change” starting from situations of injustice and exclusion caused by extreme poverty. These stories, from activists, community leaders, and others, show that when people work together, real change can happen. For more about the “Stories of Change”.

For years, a Tzigane* community was living in unsanitary conditions in Kaltenhouse, in the Bas-Rhin area of Alsace. After a long struggle alongside ATD Fourth World, the Tziganes have finally obtained adequate and dignified housing.

I first heard about Kaltenhouse in a local newspaper article. My initial thought was: how have we allowed families to live in such conditions for so long? Until recently, a shantytown created and populated by Tziganes* in 1956 had existed not far from Haguenau Airport. These families were living without running water, electricity, or heating. Their makeshift shelters couldn’t keep out the cold: no sort of conditions for raising children.

The residents did not complain, either from fear of the consequences or from a lack of hope things could change. They had resigned themselves to living this way.

In 1996, Elizabeth, a social worker at Kaltenhouse school and a member of ATD Fourth World, was troubled by the health and hygiene of the children. She alerted the mayor of Kaltenhouse as well as the prefect and a local MP. This marked the beginning of a long struggle.

Unfortunately, there was no land available to rehouse the community together. For Tziganes, family and community form the centre of their lives and the families did not want to be separated.

Appalled by the unsuitable and undignified living conditions they had encountered, members of ATD Fourth World and other associations, alongside citizens, created “The Kaltenhouse Committee” in March, 2000, in the hope of changing things. Thanks to their administrative efforts, in December of the same year a water source was installed on the site. It was the first victory.

The situation stagnated afterwards though and the residents started to lose hope. Elizabeth visited often, encouraging them not to give up. In 2002, the new deputy prefect obtained a statement of public insalubrity. However the wishes of the families were still not realized: they could not be rehoused on the same land, as construction was prohibited due to its proximity to the airport.

In 2008, hope was restored: ATD Fourth world and FEANTSA (The European Federation of National Organizations working with the Homeless) met in Strasbourg with the European Committee of Social Rights to discuss the Kaltenhouse encampment. As a result, France was found to be in breach of the European Social Charter. The new city mayor, Etienne Vallmar, and his City Council unanimously passed a modification of the land use plan allowing construction on the land.

After this, things progressed quickly. The provincial office of social urbanization took over management of the site. Meetings were organized with the families to discuss the allocation of housing. The residents of the encampment were finally listened to, gaining the right to make choices about their new life. This led to the creation of 23 detached homes.

November 2015 marked the end of a struggle that had lasted nearly 20 years. The families, the majority of whom had lived in precarious conditions since 1956, finally had a real roof over their heads and could offer a better life to their children.

* Tziganes are a community who are identified, both by themselves and by others, as people with a shared history, culture, and traditions, including, historically, a nomadic way of life. They have been living in Europe since the 9th and 10th centuries when they migrated from India.