France Bans Discrimination on the Grounds of Social Conditions 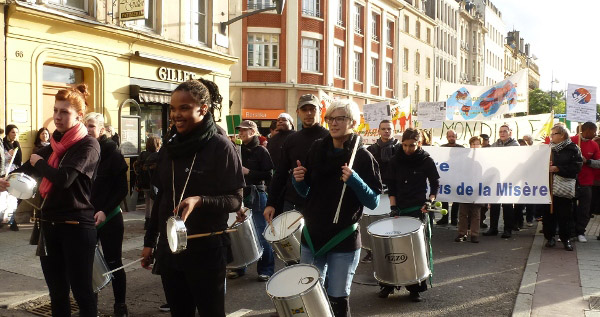 On 14 June 2016, ATD Fourth World succeeded at adding social conditions to anti-discrimination law. From now on, the law requires all doctors to treat people insured by a government plan reserved for the unemployed or anyone who has difficulty getting regular insurance. The law defends children of the unemployed who were refused access to school cafeterias on the grounds that their parents should have time to pick them up and make them lunch. The law protects job applicants with skills equal to others who were discriminated against for living in emergency shelters or having addresses in low-income areas.

This victory comes after seven years of efforts that began in 2009 when ATD Fourth World invited young people in poverty to speak out about their lives. It was their anguish at being stigmatized that stood out powerfully: “The way people look at you can kill you inside,” they said. They called on the prime minister and on European institutions to work against poverty-based discrimination and “to see every youth as a chance for society.” Their appeal resonated with the French national High Authority for the Struggle against Discrimination and for Equality (HALDE). In 2010, the HALDE asked ATD Fourth World to write a report and to present it at a hearing on discrimination.

The text that follows is an excerpt from Volume 2 of Artisans of Peace Overcoming Poverty, which retraces ATD’s efforts to challenge poverty-based discrimination.

At the hospital, a person came to make an appointment. Her insurance card is the CMU one. The secretary said in a loud voice, “You are with CMU, so you can wait longer for the appointment.” This person was humiliated in front of everyone in the waiting room.

(Couverture médicale universelle is a government plan reserved for the unemployed or anyone who has difficulty getting regular insurance. )

Prejudice or discrimination on the basis of social class, which can be expressed through individual attitudes and behaviours or through a body of policies and practices, continues to harm people living in poverty, preventing them from enjoyment of their human rights. In 2013, ATD Fourth World–France launched “No More,” a petition to the French government and Parliament denouncing instances of classism:

[…] a barrier to people moving out of poverty […and] perpetuates a lack of knowledge and understanding about the lives of people experiencing poverty. Such attitudes are sometimes based on the view that people living in poverty are inferior or of lesser value. The consequence of povertyism, for those who experience it, is that such attitudes become a driver of a particular policy approach that results in denial of their human rights.

To raise awareness about discrimination and exclusion, it is important for people to have opportunities to get to know one another, both within low-income communities and throughout the various sectors of society. However, Bruno Tardieu, former director of ATD Fourth World–France, points out, “A phenomenon is growing: the fragmentation of disadvantaged communities. People in poverty are increasingly alone. They work irregular hours, one hour here, one hour there, often by themselves. There are no longer as many ways to be part of a collective work force or to be reached by a union. Due to budget cuts in recent years, there are fewer neighbourhood gathering places, such as community centres, settlement houses, and community colleges.”

Furthermore, as people become more isolated, it can create discord and conflict when a country has terms and standards for only certain kinds of discrimination when another one, based on poverty, is also very present:

[In] France’s 717 “sensitive urban zones,” most of them in the [low-income city outskirts…], unemployment is over twice the national rate. Three-quarters live in subsidized housing; 36% are below the poverty line, three times the national average. In 2005, after three weeks of rioting that ended in a government-imposed state of emergency, there was talk of a “Marshall plan” for [these zones….] Manuel Valls, the interior minister, talks of de facto “apartheid” in France.

Here, as everywhere, people face multiple forms of discrimination based on gender, disability, age, language, ethnic origin, religion, or sexual orientation. The growing diversity in France compounds the sense of isolation in places where people work alone or have irregular hours. Extreme political parties exploit the alienation that pits people against one another. Tardieu adds:

“If a kid is bullied with a racist insult, he can shoot back, “You’re racist!” But when kids are bullied for being “welfare kids” or “shelter kids,” there are no words to defend them. This is why words are so important. Journalists lately have been writing about “anti-poor racism” — but those aren’t the right words either. The word racism has a specific meaning. What we need is an additional word for naming the discrimination that is experienced by people in poverty. Finding a name for discrimination based on poverty and creating common experiences together will help shape the conditions necessary for overcoming ethnic conflict as well and for respecting all people’s rights.”

Seeing every young person as a chance for society

It was young people living in extreme poverty who inspired ATD Fourth World to argue for a law against poverty-based discrimination in France. The French national High Authority for the Struggle against Discrimination and for Equality (HALDE) responded to their appeal and ATD’s report with a 2011 written deliberation asking both the government and the Parliament to examine ways to fight “discrimination based on social origin.”

In December 2012, the government organized a National Conference Against Poverty and for Social Inclusion. Ten members of ATD Fourth World were invited to be part of the working groups that prepared this conference. During its panel on “Changing the Way People Look at Poverty and Exclusion,” Djemila Mahmoudi and Micheline Adobati spoke before Prime Minister Jean-Marc Ayrault. They described the stigmatisation caused by poverty, which they feel is slowly weighing them down “until we no longer dare to look anyone else in the eyes.” During the conference, the issue of CMU insurance was raised. When some doctors refuse to treat people insured by the CMU, it discourages other people in poverty from trying to seek treatment.

Research: Can poverty-based discrimination be proven?

While the 2012 conference had some positive outcomes — such as a recalculation of the social welfare payment — no measures were taken concerning poverty-based discrimination. Realizing the importance of developing a legal framework to address this issue, ATD Fourth World collaborated with the research centre ISM Corum to investigate whether poverty-based discrimination could be measured. This was done by conducting an experiment from April to July 2013. Eight hundred test CVs were mailed out requesting work as supermarket cashiers. All “applicants” were in their 30s, had similar vocational qualifications, and had recently held long-term jobs related to the positions for which they were applying. Half of the CVs also included two indicators of poverty: a current address in a temporary housing shelter; and previous employment in a social enterprise designed to hire people having difficulties finding employment. (Through these “social enterprises,” the French government grants partial funding to for-profit businesses so that they will hire and train those who have been unemployed long term.) The CVs  showed that this job had been held at least seven years prior to the time of the application and had been followed by other long-term employment. The control group’s Cvs did not have these indicators of poverty. Applicants who had at one time had difficulty finding work and who were currently living in a shelter were found to be at a disadvantage. CVs in this group received job offers 50 percent less frequently. The net discrimination rate for applicants whose CVs implied poverty was +30 percent in total, +25 percent among men, and +35 percent among women.

Marie-France Zimmer, one of ATD’s members with first-hand experience of poverty, said:

“This proves we’re not liars. […] To defend ourselves against everything we hear about ourselves and about immigrants, it’s important to be able to refer to official studies and figures. You can’t imagine how important this is for us.”

National conference: “Be poor and shut up!”

In September 2013, together with the Defender of Rights and the National Consultative Commission on Human Rights, ATD Fourth World registered a formal request to Parliament for the existing law against discrimination to be amended to include the criterion of social conditions. At the same time, ATD launched a campaign to influence public opinion. In reaction to the many accusations against people in poverty that had cast a shadow on the previous election cycle, ATD published a handbook and designed a social media campaign — “Enough with False Ideas About the Poor and Poverty” — to refute stereotypes and prejudice. That October, to mark the World Day for Overcoming Poverty, ATD Fourth World–France launched the petition “No More,” calling for recognition of discrimination based on social conditions. More than forty other non-profit organisations joined in this campaign as partners. In December, a year after the 2012 national conference against poverty, the Minister for Social Affairs and Health organized a second conference — “Be Poor and Shut Up!” — the first ever to focus on poverty-based discrimination. By the end of 2014, the petition had collected 25,000 signatures.

An important step forward was taken on 21 February 2014 when the French Senate ratified a National Assembly decision to add a twentieth criterion to existing discrimination law: one based on place of residence. The law, now inscribed in the penal code, calls for:

[…] equality between women and men, policies of integration and struggle against the forms of discrimination victimising inhabitants of disadvantaged neighbourhoods, particularly as linked to a place of residence and to a person’s real or imagined origins.

From now on, people may file charges if they believe that, because of where they live, a job or housing application has been rejected, for example, a merchant has refused to take a check, or a bank has been unwilling to provide services.

While this law and the new ban against discrimination on the grounds of social conditions result from the efforts of many individuals, institutions, and non-profit organizations, we feel that particular credit should go to people like Marie-France Zimmer, as well as to Laurence and all the young people living in poverty who dared to speak out about painful personal situations in order to help their nation live up to its ideal of equality for all. ATD’s question about discrimination is how to develop co-responsibility for creating positive social change. Pierre-Yves Madignier, former president of ATD Fourth World–France, explains that the aim of pursuing changes in the discrimination law is not to launch a wave of lawsuits:

The goal should be to provide civic standards for each person, to play a role in educating everyone about living in a community, and to ensure that a child who is bullied as “trailer trash” can know that this behaviour is condemned.

Naming and condemning this behaviour is an important step toward healing the hostility rooted in alienation and isolation. Our hope is that never again will anyone have to feel that “the way people look at you can kill you inside.”