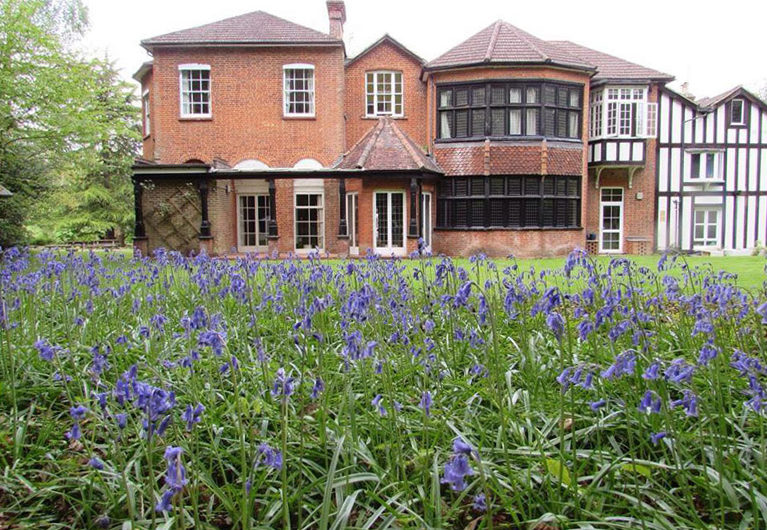 “When people are listened to, and their ideas are taken on board, you can often come up with better answers, and these are the solutions that work.”

— Eric, an activist speaking about how to overcome poverty

On 21 October, about sixty members and friends of ATD Fourth World observed the World Day for Overcoming Poverty in the Surrey countryside by continuing to commemorate the 60th anniversary of Frimhurst Family House.(1)

On a blustery day, the house was a cozy place to hear a performance by the Surrey Heath Singers and to explore together the history of and the vision behind Frimhurst. A major highlight was the premiere of the film, “Frimhurst: A Place of Freedom”. See video at end of article.

To spark the main discussion, Eric explained how spending time at Frimhurst was beneficial to his family, and how he supported another family he met there:

“Frimhurst allows families who are going through a difficult time to go on respite stays where they can get away from the stresses of their day-to-day lives. It gives them a chance to talk to, support, and learn from each other in a respectful and non-judgemental environment. When we first met ATD Fourth World, my family was struggling to stay together, to make ends meet, and to make friends and be heard. We were feeling really isolated. When families are going through a difficult time, often what they need is someone to listen to them. If you don’t listen, you don’t find out the truth of what’s going on and this makes it difficult for people to get the help that they need. If you don’t listen, you don’t learn, and we are all supposed to be learning every day of our lives, just like scientists trying to solve problems! If you tell people what to do then they lose the capacity to make decisions for themselves. Here at Frimhurst Family House, it’s different; people listen to each other. When I listened I felt a lot better, as I felt I was being listened to as well. It made me feel like I was worth listening to, and that maybe what I was saying was making sense. This in itself makes you feel more worthwhile.

“I remember, on one particular respite stay, [another participating parent] was very angry, because she was going through some trouble with social services. All she wanted to do was to hit people. I sat with her and listened for the whole day. Occasionally I would steer the conversation, but not push it. Eventually she came up with an idea that would suit both her and social services. In the end it turned out that she was able to keep her family together. Family is really important, because no one can survive forever on their own.”

This spirit of constructive listening has a long history at Frimhurst. Dr. Michael Lambert presented his doctoral research on the origins of Frimhurst in 1957 at a time when five other residential centres were opened to teach domestic skills to people seen as “problem families”:

“Whilst Frimhurst was modelled along the lines of other centres – focusing on behaviour, teaching mothercraft, cooking, cleaning, and child care – it was different. Frimhurst, from very early in its history, saw families not as ‘problem families’ but as families in trouble, struggling to get by. The regime was not strict, and any changes were not imposed by changing how mothers cared for house and home, but in dialogue with families about what they saw and experienced as difficulties. In the context of the post-war period this was very radical, and it is why Frimhurst has outlasted all the other centres.”

Another presentation highlighted the experience of Mary Rabagliati, the ATD Fourth World full-time Volunteer Corps member who lived at Frimhurst from 1968 to 1977. Diana Skelton, who is writing a biography of Mary (2), echoed Eric’s point about the crucial value of listening behind the relationships at Frimhurst. She read words from Mary:

“[At Frimhurst], I discovered the weight of our conversations and questions. This taught me to listen more intently. Even though social workers may wish to listen, time is a luxury for most of them, who usually have more work than they can cope with. Mrs. Goodman [who founded Frimhurst] taught us to listen without interrupting to question or offer explanations. You shouldn’t say, “I’m listening” unless you’re truly open to understanding what a person has to say and putting yourself in their shoes. […] It is always terribly difficult to live with families in poverty who are unhappy. In their troubles, they judge you and blame you for everything that’s gone wrong in their lives. They say exactly what they think of you: “You’re an idiot. You’ve got your nose in the air. You insult people all the time. You don’t know how to listen.” These are hard things to hear, especially when you’ve come in order to help people.

“But it was important that the families living there feel free enough to say anything. This doesn’t mean they were allowed to walk all over the volunteers. But there was a constant possibility for confrontation where families in poverty could try to free themselves from whatever life had done to them. […] The families make mistakes, and we volunteers also make mistakes. Usually social workers and people in institutions are made out to be superhuman and never do anything wrong. But at Frimhurst, we lived together as human beings. We make mistakes, and we spoil things. We’re able to forge a real relationship with the families because we are human, and we do make fools of ourselves at times.”

Together with five of Mary’s relatives, everyone present enjoyed viewing an exhibition about Frimhurst’s first sixty years. The afternoon ended with the crowd raising a glass to toast the next sixty years of Frimhurst.

Frimhurst: A Place of Freedom

1 This anniversary was first marked in July with a festive event that included activities for children of all ages.

2 Quiet Revolution: The Story of Mary Rabagliati and People the World Forgot, to be published in 2018, and currently being excerpted in a series of videos.