Skip to content
Home > Africa > Central African Republic > In Bangui: Working So Children Can Have a Future

In Bangui: Working So Children Can Have a Future 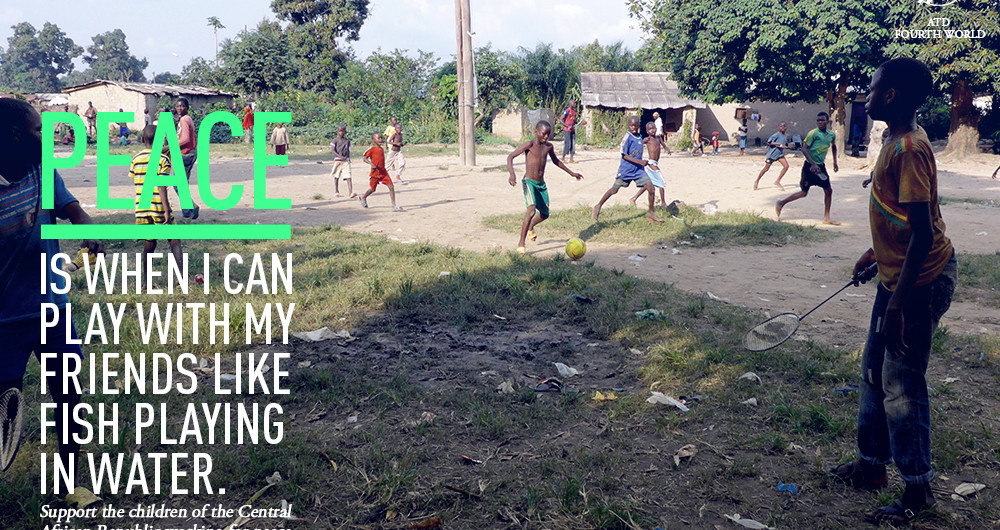 On Friday April 4, 2014, over thirty young people came together at the ATD Fourth World courtyard in Bangui, invited by Daniel, one of the Street Library coordinators. Known for his work with children at the Mpoko refugee camp at the Bangui airport, Daniel was given responsibility by an NGO to put together a team of volunteers to coordinate an awareness-building workshop on the theme of “Protecting Childhood.” They had 15 days to put together a program covering the whole of the 70,000 person refugee camp.

The 4th was the first time in six months that a meeting could be held at the ATD Courtyard. It allowed the young people to discover ATD Fourth World, all of them active and working for their little brothers and sisters. Songs and dances made the morning ripe for sharing knowledge. Daniel invited each attendee to present himself, which allowed everyone to learn more about the different organizations present. Then, during the workshops, each of them looked into the theme of the protection of childhood.

Without Daniel’s work and history, such a morning couldn’t have happened.

Rooted in his community and his action

Daniel has been working with children for a long time, and in many different ways – basketball, youth centers, HIV prevention. He connects members of his own family, puts them in touch with each other in households of different parts of his family network. From far away you can see his giant head passing.

Already in 2008, in his neighborhood of Kokoro-Boeing, families and members of ATD Fourth World had begun an activity on health and education: maintaining canals to get rid of stagnant water after rains. This work also brought together the most excluded people, sharing their concern for the health of children threatened by malaria. Links were created, a library at the market was started, and Daniel was there.

Preparing meetings of Library coordinators, evaluating activities, training himself to learn the basics of story telling, singing, and dancing, listening in confidence to the children, creating artistic activities: Daniel does it all, and always in reflection with others. Act, reflect, share and train – it has become natural.

In 2013, Daniel and his family had their share of hard times. They lost loved ones, they lost space to live in – but Daniel continued building connections: “If I stick with ‘they say’ (‘they say you can’t go there, you can’t go out, you can’t talk with so-and-so’), I would never come out of my hole,” he says.

During the battles between armed militias, and then the retaliation against the population in December 2013, Daniel and his community were among the 500,000 people displaced to the largest of the 50 refugee camps, at Mpoko Airport. The security of the children there was uncertain.

Upon arrival, Daniel found the children and families of his Market Library, as well as his friends the coordinators. Without waiting, they made themselves available to the families – to translate during a vaccination, to ensure the distribution of rations, to help teams charged with burying the deceased. But above all, on tarps brought by cart from ATD Fourth World, they made a new space for daily meetings – the Street Library. In two weeks, with Deo, Nelson, Alma, Patrice, Louis, Colin, and many others, they started dancing and singing with the children and their friends.

Daniel felt what was needed though were Home Libraries, visiting each child at home to earn the trust of their parents. Some evenings, using topics of conversation adapted to adolescents, he moderated discussions. The Street Library space became a place of refuge where one goes in difficult times.

International agencies and NGO’s that work with children, with their complicated workflows, took weeks before they got involved in the camp. When they did get involved, some of them were quickly accepted. Others improvised with coordinators coming from other areas, using unknown teaching tools and only working a few hours a day because of the curfew. The Street Library though remained a stable point of reference integrated into the life of the site. Daniel worked to create opportunities to meet and build friendship and exchange with coordinators from other international structures, notably those of the Doctors Without Borders (MSF) hospital.

With their Christmas pictures, the children from Street library went to offer a little “Joy on the hospital walls.” Daniel contacted the National Youth Council and represented ATD Fourth World as part of the team working on awareness-raising on reconciliation and peace.

During the first three months of 2014, Daniel built up links between young coordinators and employees for the NGOs in charge of Mpoko. Several times a week, he participates in meetings where he brings a comprehensive approach to on-the-ground actions. This includes meeting with families, choosing words and concepts that are accessible to everyone, and especially the civil engagement of young people for their country, alongside their little brothers and sisters. It was in this framework that the April 4th meeting was organized.

Like the “Kota Keke,” the tree which marks the seat where councils decide what is best for their communities, Daniel, rooted in a strong family and engagement in his community, reaches to the sky developing branches of friendship and partnership.