Skip to content
Home > Africa > Central African Republic > Inter-African Assembly: “Our job is to go and seek out others.”

Inter-African Assembly: “Our job is to go and seek out others.” 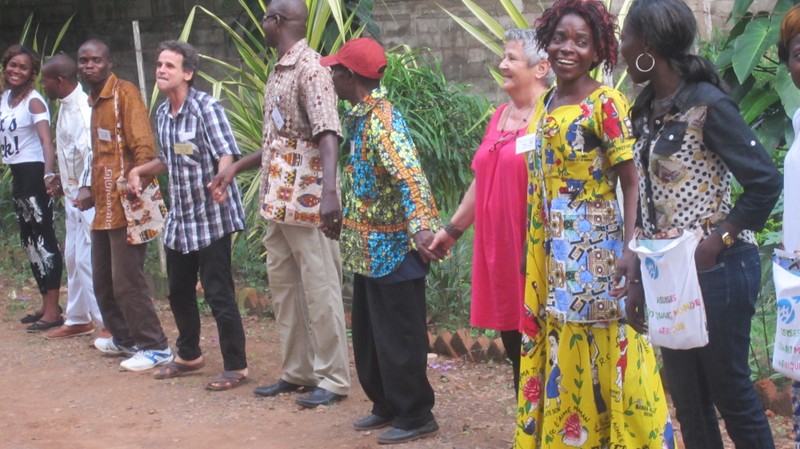 “Are we really looking for those in deepest poverty? How does the presence and action of ATD Fourth World change the lives of families in persistent poverty? How can we support one another and do more to reach those still left behind? As an international movement of people of diverse cultures, how do we learn to trust one another deeply despite our significant differences?”

These were the types of questions taken up in Bangui, Central African Republic (CAR), by some 40 long-term, active members of ATD Fourth World during a weeklong seminar in July 2016. From 10 countries in Africa and Europe (see photo below), they came together to reinforce their commitment, as well as affirm and nurture their responsibilities in guiding ATD Fourth World’s actions. This first African regional seminar launched the preparation for an upcoming organisation-wide general assembly, under the theme “Committing to Leave No-one Behind.”

That this meeting take place in the CAR was especially significant for members. In her opening remarks, Béatrice Epaye, Central African member of ATD’s international Board of Directors, recognised the courage it took to attend:

“It is not easy in these recent times for people to accept to come to us, in the Central African Republic, because of all that we have been going through. Here in the city of Bangui, we seek peace and reconciliation. You have come, and by your presence you encourage us.”

Central African delegate Parfait Nguinindji is an ATD activist with a longstanding history of overcoming hardship. From the outset, he expressed the meeting’s intended impact:

“We are not going to just sit here! There are still people struggling, suffering. They’ve been rejected, and they think they have already lost. But they are not lost causes! People need to go out and offer them strength. That’s our duty, it’s what we have to do! We are not here to rest easy. No, our job is to go and seek out others — the isolated, those huddled up and cowering — and bring them back into the community.”

“We poor people are not beggars. We feel free; take pride when we are treated like everyone else. That’s what’s most important. To give us things, that’s helpful, perhaps, but the act of bringing love is stronger. For others, we are good-for-nothing’s. Yet when the sun comes out in the morning, the sunlight arrives at your door, whatever your social rank.”

Above: The programme balanced presentations and small-group work with creative workshops and times of exchange with the wider pubic.

Florent Bambara of the Burkina Faso delegation contributed this to the group’s reflection around members’ shared responsibility:

“Getting no recognition is very difficult; it’s a burden. When I received the role for directing the national team, I wanted to make people understand that responsibility within ATD is not a power gained over others. Rather, it is a duty to ensure that everyone is recognized as an actor in this struggle, to ensure that everyone is at the table to help guide our movement in Burkina Faso.”

On July 18, the day before the seminar’s conclusion, the delegates were received at CAR’s National Assembly by a group of eight Central African parliamentarians. After a time of mutual presentation, the three-hour exchange focused on the theme “leave no-one behind”, which is in the preamble of the international community’s Sustainable Development Objectives (SDGs).

“One of the crises in the Central African Republic is due to extreme poverty”, affirmed one of the deputies. He urged his colleagues in the Assembly “to work across sectors on a framework law, across sectors, to address deep impoverishment that kills”. Several other deputies stressed the importance of education, which aligns with ATD’s approach and action.

Longstanding member of ATD El Hadj Gueye works in public administration in Senegal. He shared his experience and invited his peers to redouble efforts in each country “to reach the most withdrawn, isolated families, those families who are afraid to go to the administration because they feel they are not welcome there.”

Honorable Davy Yama, third Vice President of CAR’s National Assembly, concluded by expressing how he appreciated getting to know better ATD Fourth World and “the spirit behind it, which is to promote dignity and strengthen human capital in striving to end persistent poverty.”

Before leaving the discussion with National Assembly members, ATD delegates issued an invitation: Rendezvous on October 17, World Day for Overcoming Poverty. Joining Mr. Parfait Nguinindji and other fellow citizens on such a day would be a concrete step in promoting dignity and strengthening human capital, the delegates suggested. In fact, The National Assembly invited a 60-person delegation of ATD members to meet with deputies in October of 2016, recognizing the importance of listening to the life experiences of the most excluded citizens. (More information, in French only, on the October meeting.)