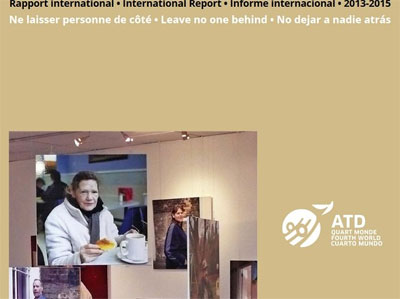 For many people around the world, recent years have been very harsh, brutal. Several countries, particularly in Africa and the Middle East, have experienced daily violence. According to the United Nations High Commissioner for Refugees, the number of people forcibly displaced worldwide exceeded 60 million for the first time, and more than a million people crossed the Mediterranean in 2015 to seek refuge in European countries. Without being the sole factors, poverty and inequalities within and between countries played a role in this suffering.

Though some countries are closing their borders, others are being more generous; at the local level, citizens are mobilizing. In Beirut, in an underprivileged neighbourhood where life has always been difficult, some families close to ATD Fourth World are putting a lot of effort into welcoming Syrian refugee families. In this country, currently hosting more than a million refugees, mothers tell us:

Elsewhere, in the Central African Republic, young people with direct experience of extreme poverty are relentlessly resisting the violence of armed conflict, taking risks to reach children, bringing them books and enabling them, despite everything, to learn and hope. They believe that with culture, with books, they can “disarm minds.”

Despite this context, 2015 has been an exceptional year with the adoption of the Sustainable Development Goals (SDGs) and the Paris Agreement on climate change. The international community is coming together to take responsibility for challenges that have no boundaries. Of course, these agreements could have been more ambitious and more specific, particularly when it comes to financing their implementation, but they set major guidelines and points of support to promote peace and justice.

In these international negotiations, ATD Fourth World spared no effort to make the voice of the poorest populations heard in order to avoid a compounded violence against them: that of poverty, exclusion, and the climate disruption that they are the first to suffer from; and also that of policies designed without their participation, thus worsening their lot when implemented. ATD Fourth World carried the message of those who, in spite of their own harsh lives, do not hesitate to take risks to stand in solidarity with vulnerable people, in order to leave no one behind. This call refers to an approach based on human rights, the only approach that can ensure that even the most isolated are reached, and the necessity to rely on the intelligence and experience of the poorest communities. This human rights-based approach is further developed in the United Nations Guiding Principles on Extreme Poverty and Human Rights, adopted by the UN in September 2012.

What is crucial now is to bring governments, the private sector and all stakeholders and citizens together in order to pursue economic and social development policies in a coherent manner while adapting to climate change and keeping the focus on “ending poverty in all its forms everywhere” as provided by the 2030 Agenda for Sustainable Development, adopted by the UN General Assembly on September 25, 2015.

From 2013 to 2015, ATD Fourth World continued its commitment with vulnerable populations so that they could make their essential contribution to addressing together the challenges facing our world: the right to live on this earth for millions of families displaced due to poverty, war, or the consequences of climate change; the pursuit of peace in all countries; the battle against unemployment in societies where far too many are condemned to uselessness; the implementation of social protection floors in countries where the informal economy condemns populations to insecurity; and the progress of quality education for all, everywhere.

Partnering with populations living in extreme poverty, creating spaces for dialogue between these populations, authorities and social partners, supporting the efforts of the poorest to keep their families and communities united, and leaving no one behind, these are the keys to ensuring that promises are kept and that societies progress towards greater justice and dignity on a path to peace.