Inventing a New Profession in the Central African Republic: Social and Cultural Mediators 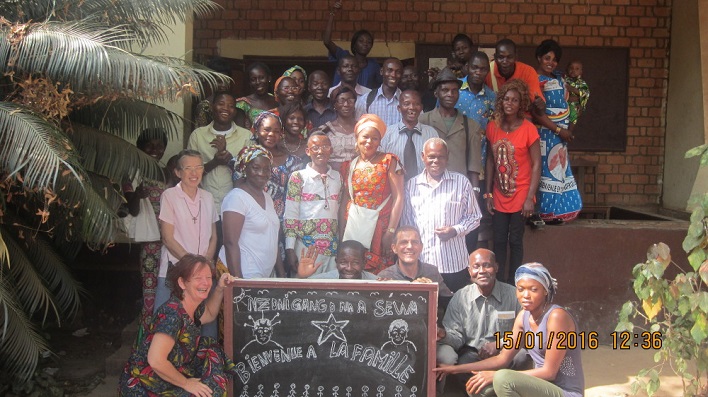 In the 2013-2017 planning for ATD Fourth World-Central African Republic, a key goal is: “to encourage young people by teaching them to pay attention to the weakest people”. The aim is to do this by developing teaching methods that will enable all of them to succeed.

For the past several months, thanks to the advice of numerous social actors, activists and friends of ATD Fourth World, as well as the support of partners and sponsors, we have been able to develop a new training programme. “Social and Cultural Mediation” is a new work-and-study course that is raising hopes in the Central African Republic, a place where no training for this profession existed previously.

In the course, students develop their capacity to create (or renew) social ties for people who are mired in the daily violence engendered by poverty. Toward this end, the apprentice “social and cultural mediators” engage people: at the marketplace, in non-profit organisations, in health clinics, at schools, in youth clubs, with the media, or during interactions with local authorities. The training programme stresses the need to be open to those who have been left out of society, in order to build a country that leaves no one behind. To do so, the course emphasizes sustainable work that is developed by and rooted in knowledge and field practice.

The first class is made up of twelve individuals, including members of various non-profits, including: rural development, interfaith groups, coordination of peace volunteers, youth savings and credit networks, and ATD Fourth World’s Street Libraries and Tapori children’s clubs. Many are also involved in their local communities as literacy teachers, neighbourhood council members, or basketball coaches.

Not only do the students come from a wide variety of employment backgrounds, but they have diverse educational backgrounds. Some have been to university, while others attended only primary school. The students’ diversity enhances the course.

The Experimental Training Course for Social and Cultural Mediation began in January 2016. By the end of the course, each trainee, coached by three teachers, will have received 1,450 hours of theoretical training and completed two months of practicals. The course will provide each participant with a “professional apprenticeship”, thanks to the partners supporting this project of ATD Fourth World.

The National Agency for Vocational Training and Employment, in conjunction with the University of Bangui, are in charge of developing the curriculum and ensuring certification of acquired skills. Meanwhile, the fieldwork is supervised by several non-profits working on public health or special education for vulnerable young people. In addition, the Ministry of Education is interested in taking the program one step further by connecting the programme to schools in disadvantaged zones in order to create new bonds between families, schools, and the surrounding social and cultural environment.

This cooperation among academic and training and education agencies bodes well for the future.

The project has three fundamental aspects:

The course will end in December 2016, with the aim of early 2017 seeing a new step in this project, where the trainees will begin working professionally as mediators. Hopefully, this pilot project will be followed up with the long-term training of future generations of Social and Cultural Mediators who can put their talents at the service of a country which is striving to leave no one behind.