Listening to the Voices of Social Entrepreneurs in Asia 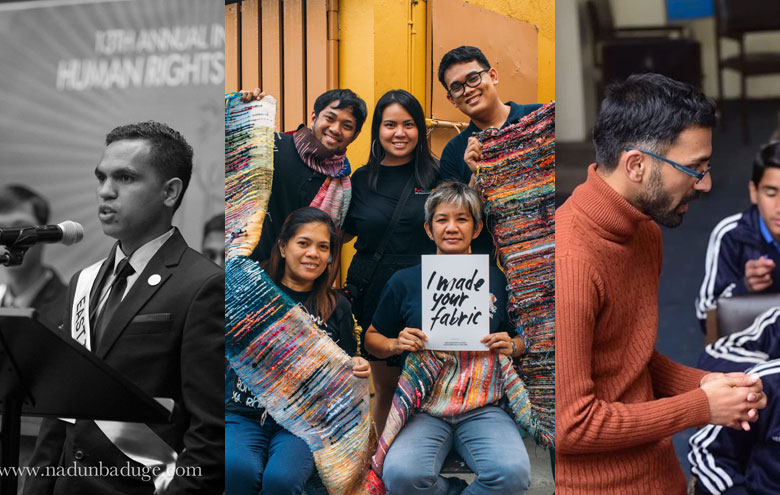 Pamela is the go-to person in Manila when it comes to vintage clothing, but she can’t help hoarding them. One day, she looked inside her closet and realized she had more clothes than she could wear in her entire life! What could she do, she asked herself, with all the clothes she no longer wears? Her friends faced with the same dilemma because there was no widespread system to recycle clothes in the Philippines.

With no answer in sight, Pamela decided to create the solution herself. After weeks of research and trial and error, she perfected a way of transforming used clothes into shoes. In the process, she discovered that many textile factories were accumulating unused fabric scraps and unsold garments. This was the start of Pamela’s journey with PHINIX, which gives new life to all the fabric scraps and discarded clothes she found along the way. Today, Pamela is 30 years old. She still creates her own shoes and handbags from fabrics and second-hand clothes such as Japanese kimonos or shopping bags! As PHINIX grew, she started to employ differently abled people in her workshops. And she’s still dreaming. Her new goal is to create the largest textile recycling centre in Southeast Asia.

Joao was born in Hatugau, a tiny village in Emera Municipality, Timor-Leste [East Timor], very far from the life I know. Every morning, he would walk nine kilometres to go to school and every evening, he would walk back the same nine kilometres, then another kilometre to fetch drinking water. With no electricity in his village, Joao was unable to study at night. While visiting an aunt in the capital city of Dili, Joao realized that another world existed outside of his village. He became determined to discover the possibilities and opportunities that this new world had to offer.

At 15, Joao sold his brother’s chicken for US$12, spent US$5 to reach Dili, knocked on his aunt’s door and enrolled in high school. From there, he found a side job and received his first scholarship to study at the National University of Dili. Soon after, he got a second scholarship for an exchange program in Japan and then a third scholarship to study in the United States. After his studies, Joao decided to come back to Timor-Leste. There, the United Nations Development Programme offered him a job supporting young people in his country to find or create decent employment.

Today, Joao is 26 and shares his skills, adventures and knowledge with the next generation of East Timorese social entrepreneurs every day. Joao frequently returns to his hometown of Hatugau to help his community and encourage children and young people to broaden their horizons. Since returning to his hometown, Joao has coordinated the installation of a drinking water pump and solar panels. His new goal is to provide English and Information Communications Technology  classes.

Ommer was born with a book in his hands. At an early age, Ommer wrote his first manuscript and tried to get it published, a task that was almost impossible in his home country, Pakistan.  While he was unsuccessful in getting his own work published, Ommer promised himself that one day, he would support other aspiring writers and help them get their work published. In 2015, Ommer delivered on his childhood promise and launched Dastaan, an online platform which provides guidance and training to aspiring writers and publishes their work.

At only 27, Ommer has helped over 7,000 Pakistani authors hone their craft, leading to the publication of 250 books in English and Urdu and allowing his vibrant community of readers to discover new Pakistani voices every day.

What do Pamela, Joao and Ommer have in common? They are all leading change through social entrepreneurship. Why is this important? They are all working in a region where young people are massively unemployed, underemployed or working in unacceptable conditions. Many face social exclusion and a lack of opportunities or skills. In addition, they are more likely to suffer from the negative impact of ongoing crises such as COVID-19 or climate change.

How can we cultivate social entrepreneurship among young people? In my opinion, this challenge can be broken down into four key areas:

Ultimately, it’s important that young people from disadvantaged backgrounds, rural areas, and vulnerable or marginalized communities also benefit from the development of an entrepreneurship ecosystem. With the right conditions and support, they are just as resilient, creative and passionate as anyone else. It’s easier said than done, but recognizing this disparity is a first step towards equalizing access to entrepreneurship. The second step is to intentionally include these young people in the discussion, in these circles, and to speak their language. Finally, they need to be given power and have their voices genuinely heard because, otherwise, it’s just tokenism.

This article was originally published in ATD’s Revue Quart Monde in French. Read the English translation is here.

More on ATD Fourth World in Asia.
More on ATD and Sustainable Economies.