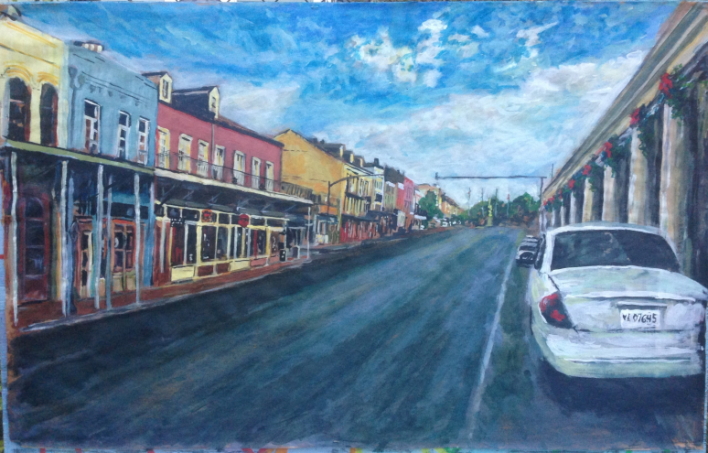 In Louisiana, people living in poverty are paying a heavy price during COVID-19. Unfortunately, this isn’t the first time they have paid heavily. In 2005, during Hurricane Katrina communities in poverty were especially hard hit in New Orleans. But they didn’t give up. They had the courage to come together and author Not Meant to Live Like This. In this book, they retraced the history of their solidarity and their struggle, for themselves and especially for future generations.

Their story can inspire us today as we look for solutions to dealing with the fallout from COVID-19. Their answer to the 2005 crisis was a renewed solidarity with those most excluded by deepest poverty.

Below are excerpts from the story of Hurricane Katrina that appeared in Not Meant to Live Like This: Weathering the Storm of Our Lives in New Orleans and in Artisans of Peace volume III.

People in New Orleans suffered from the violence of Hurricane Katrina washing away their homes in 2005. They also suffered from humiliation when policymakers chose not to rebuild much of the destroyed low-income housing in the hope that the most disadvantaged people would not return after fleeing the city. While New Orleans has rebuilt its levees and its thriving tourist trade, many of the city’s most vulnerable residents to this day remain scattered elsewhere, family members split apart wherever they managed to escape the chaos of the storm. Their lives and their lost communities represent a piece of New Orleans’ soul that has been torn away.

ATD Fourth World has had a team in New Orleans since the 1980s. In the wake of the hurricane, the volunteers’ first efforts were to track down the people they knew best. These families had been suddenly displaced across seven states in shelters and emergency housing from Arizona to Georgia to Kentucky. As the team began to make regular visits to these families, Eula Collins, an aide to the elderly and disabled, suggested that the volunteers write a book “about the Fourth World, about your work”. Maria Victoire, an ATD volunteer, knew right away that the authors of such a book should be Eula and the other activists — now spread out over four thousand kilometres in places where they had been transported in the immediate aftermath of the hurricane. Eula had been relocated to Austin, Texas. Maria began interviewing Eula and fifty other current and former New Orleans residents for what would become a collective work called Not Meant to Live Like This: Weathering the Storm of Our Lives in New Orleans.

While an increasing number of authors and researchers do listen to people in poverty to inform their work, people in situations of the most persistent poverty rarely dare to express their thoughts without the right conditions. Literature documenting the words of people in poverty must be anchored in projects that create the conditions for them to choose exactly how they want their voices to emerge. Sometimes people say things they regret or feel that their words are twisted or taken out of context. When a person in extreme poverty is interviewed by researchers or journalists, the person may feel obliged to tell them what they want to hear.

Maria and her co-authors, however, had a long pre-existing commitment to one another before they ever began writing Not Meant To Live Like This. Their relationship of trust assured Eula and the other co-authors that they could speak openly and that they would choose together how to express themselves. This process shows the importance of “purposeful knowledge” in the Merging Knowledge approach. When accounts of people in poverty are written, the subjects themselves must be allowed to shape the work in the context of solidarity and a common refusal to accept injustice.

What makes Not Meant to Live Like This unique, even more than the passages about the hurricane itself, are the descriptions of the shared history in neighbourhoods that have now been washed away forever. Time and again, very low-income neighbourhoods are erased, sometimes by natural disasters, and sometimes by public construction projects. This book bears witness to the fabric of those neighbourhoods in New Orleans: moments of joy and “letting the good times roll1”, times of penury and anguish, and layers of solidarity when neighbours came together to support one another.

Patricia Denson, who used to work at a supermarket, is one of the book’s co-authors and the mother of seven children. While she was able to return to New Orleans after the hurricane, she says, “Since Katrina, we have more struggles.” Following the storm, she lost her job and she and her husband have been struggling to get by on his earnings alone. Patricia babysits for many of her grandchildren to allow their parents to work long hours.

Another co-author, Barbara Risin, recalls struggles long before the hurricane, as well as the way that neighbourhood residents stuck by one another over the years: “All my life was a struggle. When my husband died, I didn’t know how I was going to make it. The house that I was staying in at the time — the rent was high and I couldn’t pay it. I had to look for another house. I told the people in the neighbourhood about it. Somebody was moving out of this cheaper house that night. Before those people could get their furniture out of that house, the people in the neighbourhood had that house ready for me to move into. They helped me to start all over again. That was how it was in that neighbourhood. Neighbours helped each other. That was how it was. If I had, you had. Sometimes someone couldn’t pay their rent. We would get together, cook, and then we would sell food to the longshoremen to help that person pay the rent. […] Some people, they don’t understand what the [ATD Fourth World] Movement is about. It is against poverty. It is about trying to get something started, but you have to get off your butt and get up and help. I have seen the changes in my life because, through the Movement, I found out that it is not only me. Being involved made me know more and more what it meant. So I am trying to tell other people: if you stop and listen, you learn, like I did. We want to go to the White House and tell the President what we need. Go sit across the table and tell him what is cooking in the pot, and tell him we want some of that too.”

Co-author Thomas “Long Boy” Davis was born in 1949. He remembers how united his neighbourhood was at the time, and how his mother would cook and share meals with everyone passing by: “Everybody was like family. If one person cooked, everybody ate. When my momma cooked, she cooked for everybody. Anybody needed anything, she was there.” Starting at age 15, he worked carrying the flambeaux2 in Mardi Gras parades. He later worked in construction pouring cement, but explains, “It was up and down. There wasn’t enough work. Not much work then, and none at all now. When your child would come to you and say, ‘I want that’, and you can’t do that, it takes something out of you.” A father of eight, Thomas has years of experience crabbing and catching shrimp, and has often shared the fruits of his labour with neighbours.

Maria Sandvik, an ATD volunteer and co-author, describes what she sees as one of the hardest parts of extreme poverty in New Orleans and elsewhere in the United States:

“I’ve seen the parents I know here protect their families from violence around them [although] they are left powerless in so many ways. Living in constant fear for the well-being of your loved ones is an ongoing torment that people living in persistent poverty face. People recognise the risks and are at a loss for how to avoid the dangers. They have a sense of being powerless to avoid unnecessary hardships, able only to prepare to struggle through them. There is a saying here that “knowledge is power”. But the injustice faced by those in persistent poverty is that they have the knowledge — about how to strengthen their community, about how to include others, and about the fact that they are unfairly left at higher risks for hardship and danger than others in our society — but even having this knowledge and understanding of reality doesn’t allow them to make the needed changes in their lives and in our society. The knowledge is there, but people remain powerless.”

That is where ATD Fourth World plays a role. We continue to create safe spaces and trusting relationships where people who have an experience of persistent poverty learn and practise ways to express themselves. They speak about their knowledge, wisdom, hopes, and experiences. Then they discuss those ideas with others who are also looking for solutions. I’ve had people tell me they don’t know what could stop the high rate of shootings in their communities. We can’t leave it there. We can look for solutions together with the people who are the most at risk of being hurt. When they are involved, peace can come for them and for the wider community.

Not Meant to Live Like This illustrates the rich social fabric that existed within the most impoverished communities of New Orleans. We see the coin laundry, always a place where people could talk and laugh together, despite the heartache of everyday life. These were communities where neighbours still kept an eye on one another’s children and cooked meals for a friend going through rough times. Mutual support that has become rare in well-to-do neighbourhoods was a bedrock of daily life as neighbours pitched in to raise money for funerals and to prevent evictions.

This close-knit New Orleans community and others like it are now gone forever. But Patricia, Barbara, Thomas, Maria, and their co-authors have brought the joys and hardships of their history to life for future generations. They spoke about their lives, not only to remember the past, but also to ensure that what they lived through and how they carried their burdens might inform choices we make tomorrow. The ways they built community against all odds can encourage others in their efforts to work towards a positive future. The book they wrote has already inspired our members in Haiti, who also experienced a natural disaster that devastated their efforts to build supportive neighbourhoods despite extreme poverty. They too are now writing collectively about their neighbourhoods before and since the 2010 earthquake. Even amid ruins, remembering people and places in this way can shape our common future.