Poverty and Child Protection Practice in England: Improving Collaboration and Partnership between Families and Social Workers 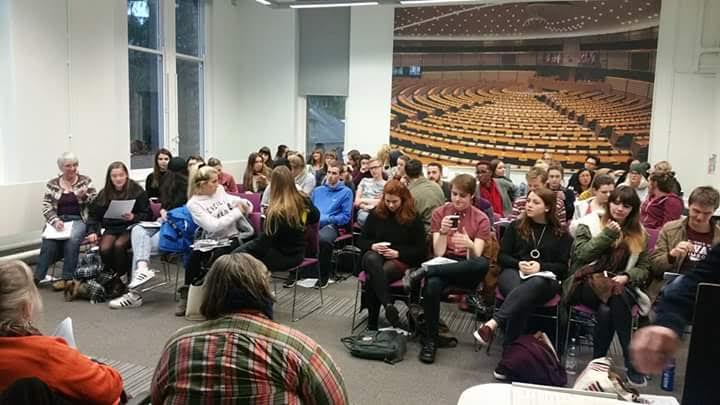 Recently, the European Journal of Social Work published an article called “Poverty, exclusion and child protection practice: the contribution of ‘the politics of recognition&respect’”, by Dr. Anna Gupta, Senior Lecturer in Social Work at Royal Holloway, University of London; Hannah Blumhardt, an independent researcher based in New Zealand; and ATD Fourth World UK. The article addresses social work practice in England. Below are excerpts and a link to the article abstract that appeared in February 2017.

The article begins by explaining the concept of “othering” and how it affects the way people in poverty are viewed.

“…‘[O]thering’ is a process of differentiation and demarcation that draws a line between ‘us’ and ‘them’, allowing social distance to be established and maintained (Lister, 2004 [Poverty. Cambridge: Polity Press.]). The application of differential moral codes to varying social categories facilitates the difference of certain ‘others’ to be interpreted as inferiority (Schwalbe et al., 2000 [Generic processes in the reproduction of inequality: An interactionist analysis. Social Forces, 79(2), 419–453.]). Othering happens frequently throughout society as a whole and can be based on assumptions about people’s race, gender, or profession. In the context of relationships with people living in poverty, ‘[n]egative value judgments constructing the poor as moral contaminants, as threats, as ‘undeserving’ economic burdens or as objects of pity are examples of ‘othering’ processes that cause people in poverty to be treated as different and inferior (Lister, 2004)’

The paper then describes ATD’s Giving Poverty a Voice – Social Worker Training Programme workshops that served as a basis for the article.

“These workshops bring together family members with experience of poverty and CP [Child Protection] interventions, academics, and social work and legal practitioners. The project aims to develop updated content for a pre-existing poverty awareness training module for social workers, delivered by family members living in poverty (ATD Fourth World, 2005 [Getting the right trainers. London: ATD Fourth World.]).” The goal of the Social Worker Training Programme is not to demonize social workers or the social work profession. Rather the project seeks to establish a basis for improved collaboration and partnership between social workers and families living in poverty in order to enhance mutual understanding and working relationships.

Throughout the workshops, people described the negative impact of “othering”.

“One example of othering behaviour cited was a lack of empathy. Family members described social workers’ lack of appreciation that parents might interpret certain decisions, processes or behaviours as ‘attacking’ or provocative. In such situations, social workers often demonstrated an inability to recognize parents’ subsequent emotions or responses as normal, misinterpreting them as emotional, defensive, aggressive or detached. Meetings where professionals excluded parents or did not speak to them directly were cited as occasions where failure to demonstrate empathy belied a lack of recognition and respect. As one participant explains, unless:

…social workers realise that the person walking in to them is already scared of them, protective, panicking for their children – unless they know that, they don’t understand the human reaction – you know they think ‘why’s she so aggressive?’ Because I’m bloody terrified they are going to take my children away! It’s normal, it’s not abnormal.

“Another aspect of othering that participants highlighted is the double standards family members face ‘across the board’ when navigating social work practices and systems. Such double standards lead family members to infer that they are somehow distinguished from the rest of society, and held to different expectations. Participants identified how families’ time appears to be ‘worth so much less than professionals’ time’, recounting experiences of social workers cancelling meetings and home visits with little or no notice or explanation, or setting gratuitous tasks that were not followed-up…

Further examples of double standards addressed differing expectations about how parents should raise their children versus expectations regarding children’s treatment once within the care system. One participant noted the irony of being told she was providing a ‘chaotic’, ‘unstable’ life for her autistic son who, once taken into care, was moved eleven times in three years, without receiving any assessment of his special needs or educational support. Family members also compared how social workers scrutinized injuries on children in their parents’ care, against how similar injuries were disregarded once children were in care. One participant compared her intrusive treatment after her son fell on an exposed nail while in her care, with what happened after her daughter broke her leg in foster care:

The way the two incidents happened and how they were handled were so different. No one went to check on my child when she broke her leg. No social worker went to check that foster care placement because she was a foster carer and ‘we trust what she says’. …

Anecdotal evidence of discrepancies between investigations of poor parents and middle-class parents were also raised. …”

The article describes how “othering” can lead to “Deficit-based practice and dismissive behaviour.”

“…Problems that an individual faces, which may derive from poverty and material deprivation, are perceived as intrinsic to the individual.” In addition, “[p]articipants emphasized that social workers do not often recognize circumstances beyond families’ control, such as the impact of poverty. … One participant recounted her first visit by a social worker, who described her as ‘living a chaotic lifestyle rather than getting my act together…incapable of learning, improving and doing the best for my children’, despite having just left a violent relationship, miscarried from moving, living in wholly new circumstances, under an unfamiliar benefit system and in temporary accommodation. When children are taken into care because parents cannot change their material circumstances and mitigate the interrelated social and psychological impacts, parents and their children are effectively punished for factors beyond their control.”

The authors conclude with a number of ideas for improving social work training and practice, acknowledging the hurdles that such reforms face including limited budgets, large caseloads, and the predominant political climate that demonizes poor people. However, workshop participants shared the hopeful attitude that even in this challenging context, a simple shift in attitude on the part of social workers can make a tremendous difference, resulting in vastly more positive outcomes.

Abstract of the article in the European Journal of Social Work.

Find more information on ATD Fourth World in the UK.

The ATD Fourth World UK Blog, Giving Poverty a Voice, was created to give people living in poverty a chance to speak out about their experiences, challenges, aspirations and ideas.