Réunion Island: People in Poverty Contribute to a National Report on Education 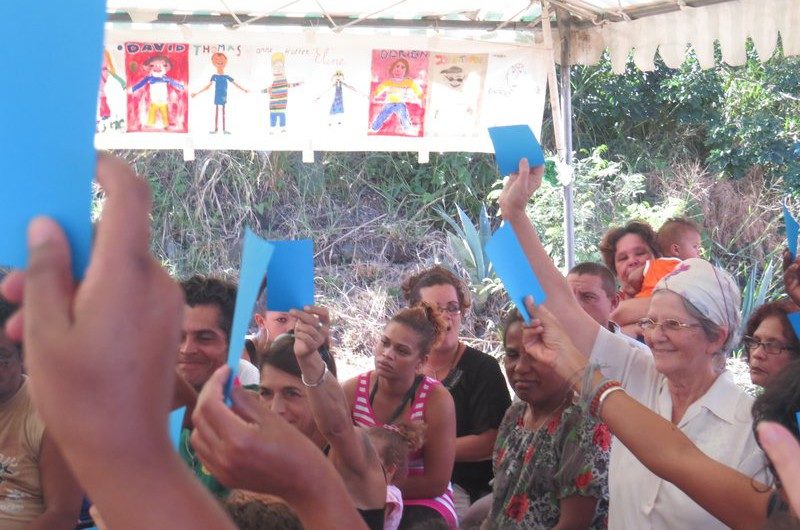 To mark the International Day of Families in May 2015, families living in poverty gathered together from all across Réunion Island.* More than 300 people — children, young people, and adults from a dozen of the island’s neighbourhoods — met in good spirits and full of enthusiasm.

While the afternoon was a time for creative and relaxing workshops, in the morning the adults and young people convened with teachers for a Fourth World People’s University on the day’s theme: “An education system in which everybody succeeds is possible!” (In Creole: “Tout moun y en sort a zot a l’école, lé possib!”

During this discussion, they finalised a contribution to a policy paper on the same theme that was then being written by the national Economic, Social and Environmental Council, a government body in which a representative of ATD Fourth World has a seat.

Building on preparatory meetings in their neighbourhoods, the parents and teachers participating spoke about their own experiences and ideas about the conditions that contribute to the success of all children. Their contribution to the policy paper, undertaken at the request of the Council’s president, Jean-Paul Delahaye, and commissioned by the French Minister of Education, is a four-page leaflet, entitled: “With trust, it is possible!”

It was written based on individual and group meetings with parents living in poverty, as well as on discussions between them and teachers who care about finding ways for all children to excel. This leaflet was later published on pages 73-76 of the Council’s policy paper.

The participants in the People’s University showed that, despite inequality and the misconceptions that various people may have about each other, it is possible for a diverse group to engage in a calm and constructive dialogue about school. A young mother who was not able to go far in school as a child explained that she has again begun learning how to read and write, thanks to learning support that her children receive from an organisation that comes to their home. Many parents pointed out that they feel stronger and get new ideas when they get to know others who are facing hardships similar to their own. They also appreciate certain programmes designed to help their children, such as the PPRE system of personalized projects for a successful education.

An assistant principal, who was invited as a guest speaker, said that taking part in this kind of dialogue between teachers and parents gives him hope, and reinforces the fact that it is always possible to learn.

The Economic, Social, and Environmental Council report, “An education system in which everybody succeeds is possible”, was launched on 12 May. It can serve as a basis for educators in Réunion Island to continue the dialogue with parents — including those coming from the lowest income backgrounds — ensuring that access to knowledge becomes a reality for all children and their families.