Solidarity in the Democratic Republic of Congo 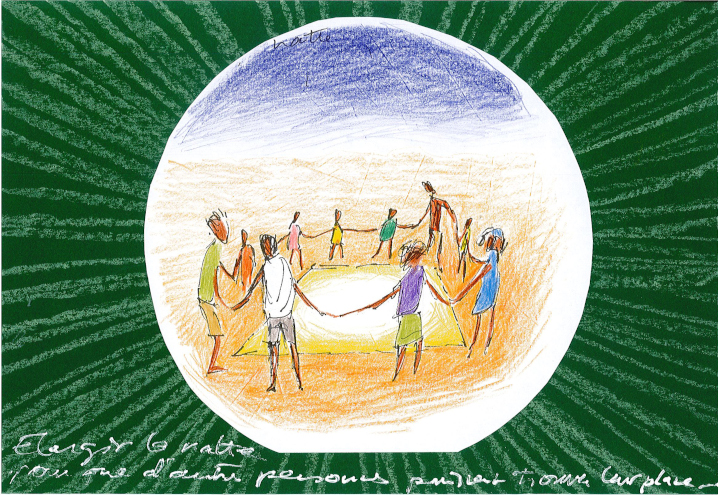 By Arsène Mulungula Babingwa, member of an ATD Fourth World youth group in the Democratic Republic of Congo

In late May 2021, the Nyiragongo volcano erupted near Goma, a city in the eastern part of the Democratic Republic of the Congo. Since then, life here has turned upside down. In addition to the volcano eruption, there have been earthquakes, power cuts, and lack of water. As a result, many have abandoned the city for safer areas.

After the lava flows stopped, people were still scared. Seismic movements caused cracks in the earth and weakened buildings. Some of these have already collapsed and killed people. And others are clearly in danger of doing the same. So many people choose to sleep outside.

Fearing new tragedies, the government decided to evacuate ten outlying Nyiragongo districts. This sent people scrambling in all directions; many took refuge in northern Goma. Thousands of families fled by boat and canoe to Bukavu, across the lake from Goma. They came on their own with nothing, despair, fear, and uncertainty etched in their faces.

Young people jump in to help

Our local ATD Fourth World youth group, always very active, responded right away. Immediately, we joined other organizations supporting those who had fled to our city. Working together, we registered them for aid and helped them get to the displaced persons camp in Ndendere.

Today, our group is still contributing to this work in different parts of Bukavu and the displaced persons camp. These young people’s impressive courage and hard work demonstrates their strength and commitment to helping others. However, it has not always been easy. Given the enormity of the suffering, some wondered if they were up to the task.

All day under the scorching sun, young people from ATD run in all directions to help. For example, they go all over the city to find lost children and unite them with their families.

At the end of one afternoon, a young boy arrived at the camp for displaced persons. He thought that his little brothers were already there. When he saw they weren’t, he became distraught, saying,

The pain of having lost his little brothers never left this young boy. Hoping to help, we put up missing notices everywhere, but never managed to locate the boys. Naturally, we all felt crushed that we could do nothing to help him. And losing his family only exacerbates this young boy’s trauma of leaving home. Sadly, so much anguish and hardship can easily become overwhelming, sabotaging the will to carry on.

In the face of tremendous suffering, the resilience and generosity of the Congolese people has been remarkable. While many refugees have received no government assistance, informal initiatives sprang up right away. These aid networks, which include even the most isolated people, illustrate the solidarity that exists here. In fact, everyone seems to be working together to overcome the consequences of this tragedy.

Through this spontaneous collaboration, we’ve seen an eagerness to contribute and the power of working together. For example, our group’s impromptu voluntary support of displaced persons has grown into a well organized effort. Without such initiatives, the suffering of our fellow citizens in Goma would have been far worse.

In these frightening and uncertain times, ATD young people in the Democratic Republic of Congo stand in trust and solidarity with each other. Despite many clouds in the sky, we are determined to help rebuild lives where ever and how ever we can.

Read more about the ATD Fourth World youth movement. Groups include young people who have experienced poverty, violence, or discrimination. In many countries around the world, they have become powerful actors for change.