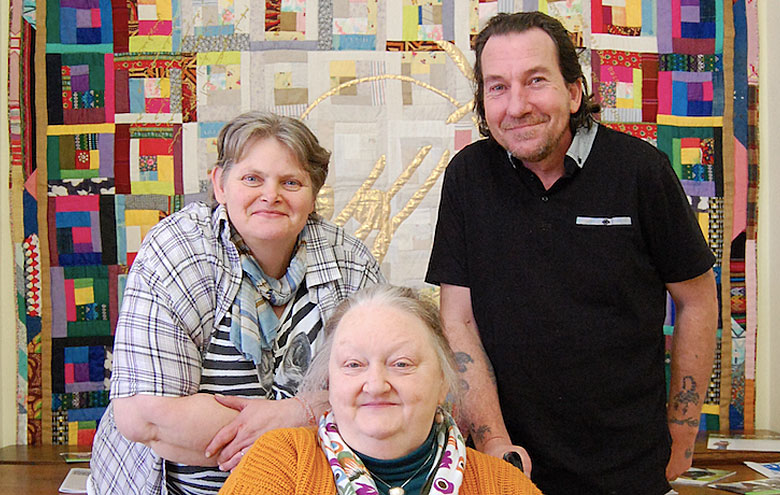 “Here, you’re not becoming dependent”, says Moraene Roberts of ATD Fourth World. Ms Roberts and two other ATD activists from the UK describe how respect and acceptance in the ATD community are what they find most useful as they stand up to poverty in their own lives.

Amanda Button: People can have their soul destroyed, but then ATD Fourth World helps them to rebuild it. For myself, and for two or three of us I know, poverty is about what life throws at you. You hit rock bottom, where you feel there’s no point in getting up in the morning. You might as well be six feet under.

Here at ATD Fourth World I got to know people who could help me. It’s our saving grace. We would have gone under. Within just a month or two of meeting ATD Fourth World, I knew I could be involved here long term. I knew that if I screwed up along the way, I could come back and start again. The ATD Fourth World centre in London is more than a building; it’s where we feed our souls.

Moraene Roberts: When you’ve been dismissed and put down for years, it’s really something when you occasionally throw something out there and one of the core workers* here says, “Wait, let me grab a note pad; say it again, because that’s important.” Who the hell says that? Here, you’re not becoming dependent, asking for help.

ATD Fourth World is prepared to listen and learn from people who’ve been kept out of social movements, and it brings that knowledge out to teach others.

Here, I don’t just receive. I give back something of value.

Amanda Button: At ATD Fourth World, I met others who were in the same situation as I was.

Here, I don’t feel like people talk to me only because they’re paid to.

It made me realise that we’re all perfectly normal human beings. It’s the situation we were in that was so abnormal that it stripped our humanity away.

There are so many other places where you go to ask for help, but you feel ashamed. You know people are judging you.

As a young mother, I was convinced that there was something fundamentally wrong with me. I am normal, but the other agencies I went to for help made me believe that I wasn’t.

Thomas Mayes: An important value at ATD Fourth World is that we’re all-inclusive. We listen to all voices, and we give activists the opportunity to use their voices.

It’s not like charities where the people in charge do all the public speaking. We also like the level of trust here. You can tell the truth.

Now, to keep what’s special and also carry on, we need to find new people, and we also need to find a way of safely integrating them. Some activists find it hard, when you’ve had a project for a while, to work with new people who might want change. But after a project has been running for several years, you need a new outside look at it to see what needs changing.

Moraene Roberts: [W]e have to really fight and to decide what we want to build in place of poverty. For ourselves, we’re often so battered down by the situation that we accept it. But when you see others suffering, you feel indignant about what’s been done to them. You begin looking for people to support. It really was a fight; it felt like a struggle for years and years. More than a fight, it was a rage: how dare they impose this on us, and then blame us for it? Eventually you can get over the rage — but you can’t do that alone. Realising that you’re with others gives you courage.

*Members of ATD’s full-time Volunteer Corps.  Learn more about this opportunity to work alongside people who live in deep poverty around the world.