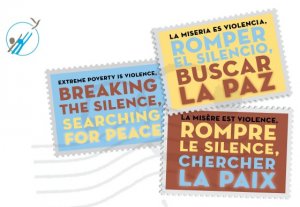 What is it that makes us human beings?
We have intelligence and we think, we have a voice and can communicate through language. We have emotions and we can show them. We have dignity and choice.
During a seminar in March 2011, we discovered how poor people are denied these intrinsically human traits; we are neither recognised nor treated as human beings.
Several participants spoke of not been able or allowed to speak up when faced with acts of violence against them.
In situations of injustice participants stated that their words were misinterpreted and used against them. So, to complain was seen as non-corporation, to protest as aggression, to explain as making excuses. To be frustrated at your own total powerlessness was seen aggression. Those who did speak up were either disbelieved, disregarded or punished. “We keep it all in to avoid making it worse”
Even those who spoke up for others often faced a backlash, within their jobs or their communities, being told things like, “If you lie down with dogs you get fleas”.
Well, people in poverty are not dogs.

Human emotion is a powerful thing, yet many who live in poverty feel that they are not allowed to express normal emotion, because they are not perceived by other as normal.

In the UK the poorer a family is the more likely it is that their child will be taken from their care by the local authorities and adopted against the will of the parents.
One participant, who had her child taken away said..
“I have to use the Letter Box System. How it works is that you have a kid and you want to send them a photo or a letter. You send it to the adoption office. They open the letter and read the contents to check that you haven’t written something you shouldn’t have. You are not aloud to say I miss you, or we are fighting to get you back. If they think is inappropriate, the kids will not get the letter, and you will get told off.”
Another said “I am not allowed to tell my child I love him”

Many participant spoke about being angry at how they were treated but could not show it, not even allowed to cry or they were accused of manipulation. At a violent eviction of travellers in the UK, one mother stood in front of her family to protect them, and a police officer grabbed her children and began pushing them. She called out,” They are my children”, and he said, “And you are boasting about that as if you are proud.”
Constantly the poor are treated and spoken to by authorities as though they are lesser human beings.
At the seminar we heard two clear examples of this.
As Hurricane Katrina approached New Orleans in the USA, the guards at the prison locked the prisoners in their cells and then left. When the dams broke, the waters rose. The men heard the flood coming and the water rose higher in their cells. They climbed on to the bunk-beds, sure someone would come for them, but no one came. For days they were left without food, clean water or sanitation, forced to endure the stench and filth of contaminated water that could drown them. “They did not say we were not human beings, but they showed it by their manner.” The officers had saved the guard-dogs and left the men.
In a second example a young person described how as a child, he ran away from home to escape domestic violence. At ten years of age he went to the police station as that should have been a safe place, but he could not get in. Lying across the steps outside he hoped to get help, but the police officer leaving and entering the building simply stepped over him. No one asked why this child was there, no one cared; eventually he had to go home.
Another participant said “When you step over a ten year old child alone on a step, you don’t see a small human being, you don’t see a human being at all”

We had many examples of this disregard for the rights and welfare of poor people. Even to the point where social workers and others saw living in poverty, not as a shame on society but as the fault of the poor, and a sign of neglect of their children.

Often in the UK media, it is said that those who are poor should not be allowed to have children, but every human being has the right to form a family and live as a family.
Again and again examples where given, of how people were reduced by authorities and services to a number; a case file; a label; like prisoner; run away; homeless; care-leaver; as though they had no identity.

“Sometimes the steps are quite subtle in the way that they do it and sometimes you don’t realise immediately what is going on, that you’re being made into something other than what you should be. Then at some point you think about it and you think, they wouldn’t do this to someone else well why are they doing this to me. I am not a bad person I am a poor person.”

Even in death, when all people should be equal the poor are denied their identity. During the seminar we visited a cemetery that had- like most cemeteries- an area where the destitute poor are buried. Over time the soil had settled and we could see rows on rows of mounds.
There were no gravestones no names, nothing to show who lay there. In death as in life the poor became nothing, as if they had never existed. In death as in life all choice and dignity were taken from them, yet they were human beings and so are we who still live in poverty.

This is what I brought from the seminar in the UK. Now I would like to take a minute to speak about my experience of this colloquiem. This is an amazing gathering of people from many places, from different backgrounds but all with a will to end the violence of poverty. This is something we can only achieve together.
All of my life I have been fighting poverty and discrimination, for 22 years with ATDFW fighting against exclusion, but “fighting” and “against” are words of violence too. Ultimately, it is people you are fighting and against. In these days I have learnt new ways to end poverty, new tools, new words. I have learnt the language of “building peace”, “creating peace together”, and “Sharing peace in our lives”. This gives me hope and inspiration so I thank all of the participants and go home with a new commitment , not fighting but building peace.