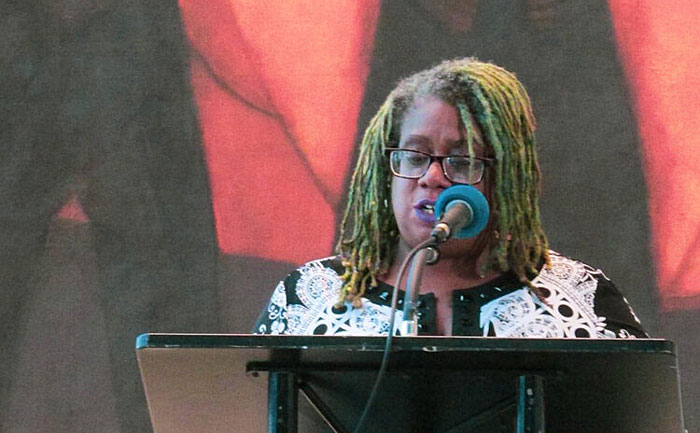 Stacy White is an ATD Fourth World Activist in New York City. She is 51 years old, lives in the Bronx in New York City, and has six children, nine grandchildren and one great-grandchild. Her life revolves around her family. She is starting a jewelry-selling business with her daughters. When it succeeds, she plans to donate proceeds to ATD Fourth World to help people living in poverty. She answered the following questions on July 13, 2021.

How did you meet ATD Fourth World?

I met ATD Fourth World through Emma Speaks, a long-time ATD Fourth World Activist. We attend the same church. She invited me numerous times before I even decided to go with her to ATD. It sounded wonderful. At that time I was introverted, not going places. I’m not a person to go into crowds or meet new people. Change is not really for me. I loved how it sounded, though. Then after about a year and a half, I finally accepted her invitation and went with her. And then when I met everyone, I went, “Wow!”

What have you done with ATD Fourth World?

I am a volunteer in the Story Garden in Brownsville on Fridays. I am also on the People’s University planning team. I just finished being on the Discernment Group [to determine the next ATD International Leadership Team]. I’ve been involved in the Merging of Knowledge training and the social business we are planning in Brownsville. I was part of a remote learning support group, discussing the pros and cons with remote learning when the kids were learning remotely due to the pandemic. I was also part of the Festival of Arts and Learning. That was awesome.

I spoke at the United Nations (U.N.) twice. Once for October 17th, the World Day for Overcoming Extreme Poverty, about myself living in poverty, where I grew up, how I’ve been in the shelter, what I got out of ATD and what I’m doing now. The second time at the U.N. was about how I was able to move out of the shelter and what I did on my own. I was also on a panel at the Center on Budget and Policy Priorities conference on TANF in Washington DC.

Why did (and do) you decide to work with ATD Fourth World?

I first started getting involved because I was asked if I would like to do it. Because very nice people asked me, without knowing me much, so I just said, “Yes.”  As they started asking me to get involved in certain things, I started doing them because I could see that it was really helping other people. It was also helping me, giving me a lot of knowledge.

I keep doing it because what I got out of it I would like other people to get out of it. It empowers yourself to face the world. They were reaching out and I thought,  “Wow, people care.”  They are ready to help you, give you all the resources you need, ready to talk to you. They reach out to you. They don’t only tell you something and then that’s it. ATD sincerely reaches out to you.

ATD Fourth World is the wind beneath my wings. Finally, I’m off the ground. People ask me, “But, Stacy, you’ve always been strong.”  Most of it was because I had to be.

I wasn’t really being myself. I was just sounding strong. I was just acting strong. And that was all just a mask. Since I’ve been with ATD, that mask has now come off. I sincerely have opened up and feel so much stronger with my voice and anything that is happening in the community.  I want other people to feel like that.

What else has been transformative? Are there other ways you and/or your life have changed?

ATD Fourth World has me wanting to do more. I’ve become more motivated to help people in poverty and the community.

What are/were the most important/favorite projects you’ve worked on?

My most favorite one, though it weirded me out, was when I spoke at the U.N. on October 17th. Because it challenged me. If I can go there and speak to a bunch of people that I don’t know, and don’t know me, who will listen to my story, that was a challenge for me. I said, “I’m going to get my word out there and someone is going to listen.”

I was determined, as nervous and scared as I was, I was determined to do that. It was a very big challenge and I wanted people to hear me. I wanted them to know and to see, however well made up I was that day, this is what poverty looks like.

People who didn’t hear me speak thought I was part of the U.N. audience. It’s a perception of what poverty looks like. One person said, “You look expensive.” The dress and shoes I had on were from the church. Maybe I was shining.

How have you shared your work with ATD Fourth World with other people?

Everything I do with ATD I take outside of there, let people know what I do and invite them: Family, on the train, in church. I leave pamphlets in stores.

What are you looking forward to being part of next with ATD Fourth World?

I want to have ATD Fourth World out there in your face. I want it on the side of a bus, on billboards, in schools, the PTA, in doctors’ offices, and foster care agencies. Everywhere. I want an ATD commercial. It needs to be out there.

I’m looking forward to pushing ATD into the world. Families in poverty don’t know about ATD and what we do. Let’s get out there and let them know who we are, so we can do what we do, get more people involved and lift people out of poverty. Let them know we are here, you can come, you can talk, that it’s a safe place where people can come and speak with us, tell us what they need, what they are going through.

People’s University really helped me a lot. There’s stuff inside and once you talk about it, like an onion, it peels off of you, it feels great, that’s another layer, I can let that go. So many people are looking for things to happen so fast. But it doesn’t happen that way. We can help you along the way. I’m ready for it.