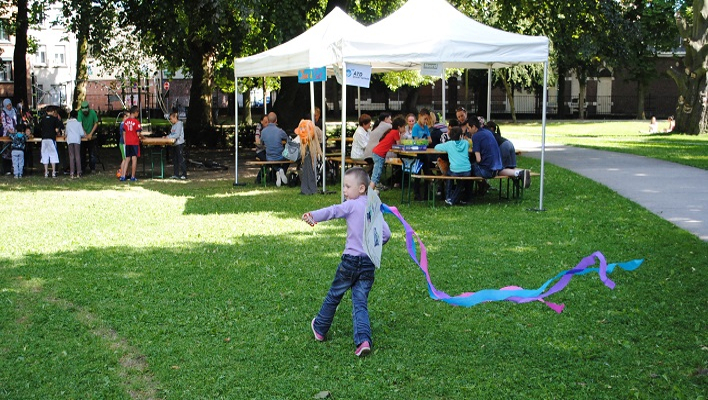 Lille, France — On August 2-4, 2015, ATD Fourth World organized a three-day Street Library Festival on the outskirts of Lille, in the low-income Fives District. Throughout the year ATD runs a Street Library designed to serve all the inhabitants of this District.

Throughout the outdoor festival, a variety of creative group activities were held. Passers-by were invited to take part, or to help organize, or simply to watch. It was a time for people to meet new faces and to celebrate one another’s diversity, regardless of gender, ethnicity, social, or generational differences. The activities encouraged participants — including residents, social workers, teachers, and sports coaches — to discover and learn more about others, as well as about themselves,

As always in ATD’s projects, the goal was to reach out in particular to those who otherwise might not dare to participate, in order to ensure that no one would be left out. And the festival did just that. Many residents of Fives District got to know their neighbors — including neighbors they had not met before — through games and activities.

The festival also enabled participants to try out activities for the first time (and to try doing these new activities with new people!). Among other workshops, there was kite-building, taught by Julie. For a sewing workshop, instructions were given by ATD volunteer Céline, supported by residents Mathieu, and Nadia, among others.

Residents: participants in their neighborhoods

Some people came to the festival to walk around and participate in the activities. Others had worked behind the scenes to help prepare and run the event. Coralie, for instance, ran a creative workshop using rubber bands. She and her daughter gave public demonstrations and helped out participants.

As for Coralie’s husband, Mickaël, he joined Marianne to lead a group project to create a sandstone sculpture entitled, “Mr. Tree of Fives.” Marianne’s workshop must have been a hit last year because a little girl recognized Marianne, remarking, “Oh, you were the one who did pottery last year!”

Activities were not only limited to crafts: Sylvain ran traditional Flemish games at his stall, while Nathalie led children in a duck-fishing game. Nathalie’s husband, Yves, invited the public to share in his passion for “bocce” bowling, and Catherine and Philippe hosted amateur players in card games of pinochle. In fact, the festival even had a 3-D printer! Maëlle and Mathias, two young people from an organization called “The Illusion Laboratory,” partnered with the festival by running a workshop devoted to creating touch-and-feel books.

All in all, the Street Library Festival not only encouraged individuals to meet new people and try new activities, but also to honor their neighbourhood. It showed a united community, and helped to counter prejudiced views of the generally neglected area. We hope next year’s festival will be just as great a success!