Posted on 27 April 2017
This page is available in Kiswahili 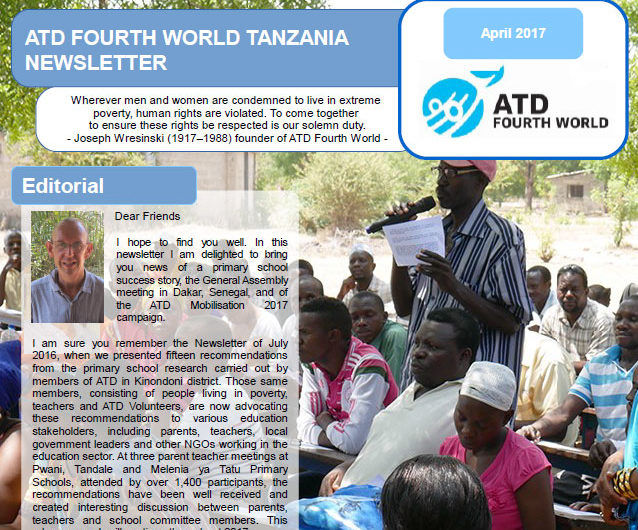 Dear Friends
I hope to find you well. In this newsletter I am delighted to bring you news of a primary school success story, the General Assembly meeting in Dakar, Senegal, and of the #StopPoverty campaign.

I am sure you remember the Newsletter of July 2016, when we presented fifteen recommendations from the primary school research carried out by members of ATD in Kinondoni district. Those same members, consisting of people living in poverty, teachers and ATD Volunteers, are now advocating these recommendations to various education stakeholders, including parents, teachers, local government leaders and other NGOs working in the education sector. At three parent teacher meetings at Pwani, Tandale and Melenia ya Tatu Primary Schools, attended by over 1,400 participants, the recommendations have been well received and created interesting discussion between parents, teachers and school committee members. This advocacy work will continue throughout 2017.

This Newsletter we will bring you a story of one family’s determination to overcoming challenges and create new partnerships built on understanding and respect, which demonstrate how the Education for All recommendations can have a real impact on one family.

From July 2016 until March 2017, a General Assembly process has been followed in the African Region, involving seven countries and over 30 members of ATD. This process culminated in a meeting in Dakar at the beginning of March.

The final page is dedicated to commemorating the 100 years since the birth of ATD founder, Joseph Wresinski; the sixtieth anniversary of the movement’s creation in 1957; and thirty years since the first World Day for Overcoming Poverty on 17 October, 1987. During this significant year, ATD members will commit themselves to an appeal; STOP POVERTY: Bringing people together from all around the world to take action and stop poverty.