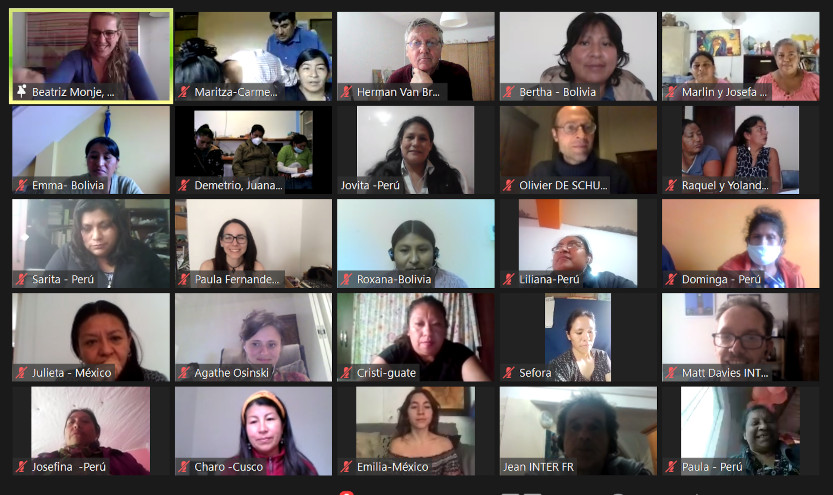 Photo above: Remote meeting between members of ATD Fourth World and the United Nations Special Rapporteur on extreme poverty and human rights, Olivier De Schutter, in 2021

In 2020, the United Nations Special Rapporteur on extreme poverty and human rights, Olivier De Schutter, approached the International Movement ATD Fourth World. He asked if Fourth World Activists would be willing to talk about their own experiences of living in poverty for an official United Nations report he was working on. Published in six languages, the final report was presented to the UN General Assembly in New York last October.

In developing the report, the Special Rapporteur pioneered a new way of working on a document like this. Through a process of “participatory dialogues,” people living in extreme poverty described what they know from their own first hand experiences.

The Special Rapporteur is convinced that learning from people’s first hand experiences is essential to really understanding the persistence of poverty.

The participatory dialogues took place with Fourth World activists and ATD teams from Belgium, the Democratic Republic of Congo, several Latin American countries, and Luxembourg. Two multi-hour video-conferences took place with Latin American countries and the Democratic Republic of Congo. In addition, there were two full day in-person meetings with participants from Belgium and Luxembourg.

While these dialogues were taking place, the Special Rapporteur asked university researchers to comment for the report. In addition, he invited ATD Fourth World for input on some additional points the researchers hadn’t addressed.

In its comments, ATD Fourth World called into question the term “inter-generational transmission” of poverty, preferring “inter-generational persistence”. The first expression, they said, could suggest that parents are responsible for passing poverty on to their children.

For ATD, the notion of persistence reflects reality more accurately. In fact, many people experience poverty as a trap composed of structural, institutional, and social barriers, even sometimes of relationships. Discussed at length, the term “persistence” became a central theme of the final report.

Other issues emphasized in the participatory dialogues included:

Although their experiences and perspective are essential to understanding poverty better, others rarely ask people in extreme poverty to contribute to solutions.

In addition, dialogue participants brought up the issue of services and other support structures, both state-run and private. Access to services is essential for people living precarious lives. At play here is not only access to material resources but also the question of relationships, respect, listening, and both individual and collective rights.

Discrimination—both structural and institutional—was a central theme in the dialogues.

Uniting for a better future

Dialogue participants asked what leverage or tools are available if people in poverty want to use their knowledge and experience to achieve wide-scale change. Many suggested finding ways to come together as a group to share their expertise.

Olivier De Schutter and his team underlined the importance of this several times:

A summary accompanies the full report presented to the UN. Both specifically quote people who took part in the dialogues to highlight their contributions and encourage such input on the issue of extreme poverty in the future.

Watch video on socio-economic discrimination, “Don’t Say Where You Are From”, a conversation with Olivier De Schutter and people living in poverty.