United We Are a Rock 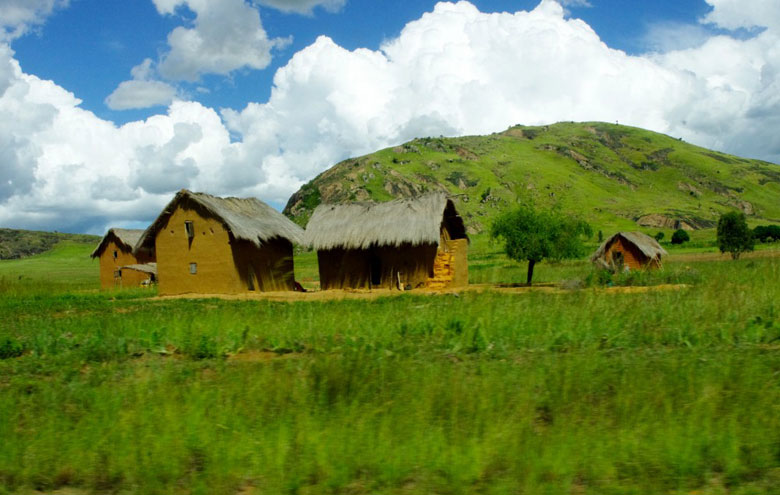 Jöel is a young man living in Majunga, in the north-western part of Madagascar. He organized one village’s residents to help build a new roof for the local school. As a result, the the children no longer had to take turns going to class.

Last September, I went to my brother-in-law’s village, more than one hundred kilometres away from Tananarive, in order to help him renovate a tomb. Once there, I went for a walk to explore the village. I saw a primary school that had no roof or door. It consisted of only two rooms for the schoolchildren.

People told me that the classes took turns, with each only having two hours of class a day. Only the older students had more time in school to prepare for their primary certificate exam. Moreover, when it rained, it was impossible to teach and school was cancelled. People told me that despite all of these difficulties the students’ results on the final certificate exams were good.

I was really moved by it all and I enthusiastically decided that something had to be done. I went to see the head of the village so that I could talk to him. He replied, “What’s it got to do with you? You are a stranger to this village.”

I did my utmost to try and keep calm. I explained to him that I did not like the idea that the children had no school when it was raining. He told me he did not have enough funds to renovate the school.

Once I was back home, I asked my brother-in-law about the school. He answered, “You should just get on with your job and keep out of it.” Deep down I thought I had to try and do something. I met the teacher and told him I had no financial means, but I could think with him about what we could do. He told me that he wanted to improve the school, but hadn’t been able to find solutions.

Together we went to the town’s office, a good hour’s walk away. When the mayor saw the teacher, he said assertively, “There are no funds yet to build a school here and you can’t find the money.” However, I insisted, stating, “Please, let us discuss it with you.” The mayor replied, “And who are you to interfere with the people’s business in this town? You are a stranger and a newcomer to the village.” I told him why I was in the village. “Look after the tomb with your brother and go back home”, he responded. He did not want to hear anything more about it.

“Putting Our Heads Together”

I am a member of an ATD Fourth World group called “Putting Our Heads Together”, made up of people from different social backgrounds. We share our ideas with one another to make decisions about the work of ATD Fourth World in Madagascar. To think about this problem, I reflected on the discussions our group had and they gave me an idea. The teacher and I could call the parents together and tell them, “The rainy season is getting closer and if you want your school to be restored properly, you can all contribute to make it happen.”

Of course, the resulting fund had to be managed and we agreed that a teacher would do this. Everyone gave what he or she could. Ten days later, we had enough money to buy metal sheets, wood, and nails. The inhabitants managed to buy eight sheets. Even the mayor contributed. We also involved the parents by inviting them to carry out the work themselves and they happily agreed. Putting the roof on was a success. We not only built the roof, but the people also provided the doors. Two months later, the school was fully repaired and today the children can study in comfort and safety even when it is raining.

My brother-in-law was enthusiastic when he saw the school. The teacher told me, “You’re still young and you already behave like this? You are a great example to us!” I answered, “If everyone takes up their responsibilities, the nation will go far.” He kept giving me compliments. However, I changed the subject, as I am rather shy of being praised. For me, the work done on the school was a success, not only because of the construction itself, but also because everyone got involved.