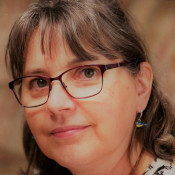 Inspired by Joseph Wresinski’s words during the first World Day for Overcoming Poverty in 1987:

“And you, young people, who are impatient for justice and for the truth. What are you going to do in your schools, in your universities, and in your youth clubs?”

Chantal became an ally in Besançon, France where she was studying geology. Her work with ATD and what she learned from Volunteer Corps members and other allies led her to join the Volunteer Corps herself in 1995.

There, she discovered how ATD Fourth World is truly an international organization. In two French cities, Marseille and Lille, Chantal worked with families living in deep poverty. Her ATD team partnered with other organizations working to involve those in extreme poverty in neighbourhood projects where no one is left out.

In Switzerland, Chantal served as a member of the Tapori international coordination team. Through her contact with children around the world, Chantal saw how they often take the initiative to build peace and friendship among themselves, even when both seem impossible.

Returning to France, Chantal spent six years running an ATD Fourth World People’s University near Paris. At the same time, she took part in ATD’s international research project on the Hidden Dimensions of Poverty. Working alongside ATD Fourth World activists, Chantal experienced the challenge of being a co-researcher on equal footing with academics and other professionals.

Prior to joining the International Leadership Team in 2021, Chantal helped coordinate ATD’s regional work in Europe. There she saw the eagerness of ATD Fourth World members across Europe to meet together and to encourage one another in their struggle to overcome poverty.

Chantal comes from a small village in eastern France, near the border with Switzerland. Growing up there, she experienced the solidarity of rural communities and developed a strong bond with nature. Chantal and her husband, Emmanuel have two children.

“It is thanks to their support and that of my family – my father, my sisters and my brother – that I have been able to devote myself to such a range of positions with ATD Fourth World”, Chantal explains. “This work has been central to my life for more than 35 years. It is with a mixture of enthusiasm and fear that I am joining the new International Leadership Team. I will try to live up to your trust”, she said, addressing ATD members. “But to do that, I will need all of you.”