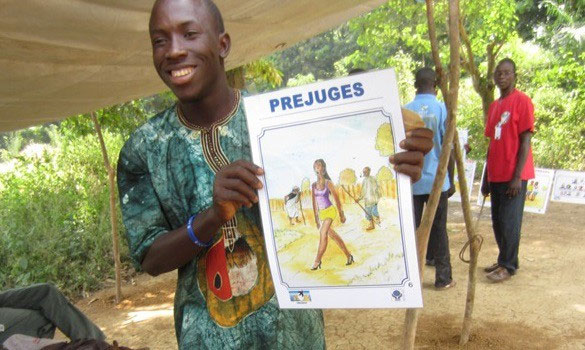 Some 35 young people attended a training course on peace, organized by the Rwandan association “Umuseke,” which means “dawn” in the Kinyarwanda language. This training, from May 1-3, 2015, was one of many opportunities these youths have collectively participated in to promote reconciliation and education in their village, neighborhood, church or school. They’re not alone in this undertaking; others, who have experienced the same realities, support them. Let’s have a look at these young people who are helping build sustainable peace in the Central African Republic.

June, 2014: The “Towards citizenship through peace” training course

Through six days of discussions, games, theater, and workshops using photos, the youth activists identified and addressed stereotypes, fear mongering and scare tactics, rumors and prejudice that affect them and their communities. The session was also an opportunity for them to think about rights and obligations and the need to make commitments. Participants left the training with skills and tools they can use in their neighborhoods or towns.

Geoffroy, who lives in a village 22 km from Bangui: “At this moment for our country, everyone has to do their part to promote peace. We came to build peace. Being here gives us each a responsibility to share what we learned in our own districts, so I’ll do my best to train others in my community.”

Spreading peace: in Bangui and in villages

Upon completing the training session, participants immediately started sharing the “path towards peace” philosophy and skills in every setting—at work, at places of worship, or at home.

Following a training session facilitated for youth, educators and managers by Dieudonné, from the La Voix du Coeur Foundation, the young people prepared a “Forum Theater” performance to show the Minister of Social Affairs what they had learned.

Marius, an educator in Afriyan, liked the “learning by doing” method, and used it during the Day of the African Child. Other participants in the training, like Nicolas Barré, shared lessons learned with teachers and administrators at local schools. Fabrice, one of the primary school teachers who heard from Barré, expressed that the “training session was needed.”

On the World Day for Overcoming Poverty, Keven, Firmin, Herbert, Rufin, Eben Cedrick, Georges, Grace and Arnaud shared what they had learned from the training at various meetings across the country. And they encouraged individuals to spread learning and continue conversations in whatever setting would work for a community, whether it be at neighborhood meetings, town halls, or with groups of young adults.

Laury and Marium, both members of the Inter-Religion platform, presented in July and August to children and teen refugees from the Bangui central mosque.

For each of these young adults, the decision to participate in the Training for Peace and in the subsequent activities was the result of a long process of collective seeking and individual reflection. Kevin put it this way: “What I like about ATD is that we all work together. I could have done things alone, but it’s much better with others. We engage our friends, and this brings us together. Before, I was a victim of pillage, and I was depressed. When I run activities for children, I’ve got peace in my heart, rather than staying alone at home, where I was afraid.”

Dieudonné said, “I felt a calling to work with ‘La Voix du Coeur’ with children who live in the streets. These children were different, and some were on drugs. I understood that they were facing extreme situations and were angry. But they were also capable of love. What I do matters to them. With them, I forget my own worries as I know that they have more problems than I do.”

Mariam recounts, “I’m a volunteer with the International Rescue Committee. In our neighborhood, children have been exposed to too much violence. In our community center, children used to come with knives made out of wood to would play games that mimicked the violence they witnessed, saying, ‘I’ll be a Seleka, you be Balaka,’ and fighting. We succeeded in changing that. We were even accused of taking sides in the conflicts, but with God’s help we’ve been able to keep going.”

In Rwanda, “the choice of no revenge”

On March 19, a group of local youth activists, including those who lead street libraries, went on a study trip to Kigali, Rwanda, to learn about education for peace and to discuss with other youth from Rwanda, Burundi, the Congo and the Democratic Republic, who have also experienced war and violence.

The group discussed contributing factors to the conflict and violence in the Central African Republic: lack of job opportunities for young adults who saw war and violence as the only opportunity; exploitation of poverty by those in power; corrupt governments, and more. The trip strengthened their belief that peace can not be left to governments to figure out. Rather, everyone must work towards peace every day.

The study trip began with a visit to a memorial of the Rwandan genocide: “What really touched me was ‘the choice of no revenge.’ The country was able to overcome its wounds and rebuild.” The youth then participated in the March Against Violence with over 900 others, followed by a day in Mpanda at the training center.

In the village of Guiseke, where the youth delegation was warmly welcomed, there were many discussions about local activities supporting the movement towards peace. They learned about projects like one supporting families from all ethnic groups to sell rabbits and chickens by providing financial aid as well as training and consultation on agriculture and livestock husbandry.

Calixte, from the village, said to the youth delegation, “We’re happy you came. We went through war too, but now we all live together, without any ethnic conflict, thanks to training on peace. We’ve especially worked to increase understanding and social cohesion, as there’s strength in numbers.”

Dieudonné concluded: “Today, we’re amazed to see how much your delegation did for our little town. We have our own reality in Central African Republic and our own way of working and living. But we saw that your actions generated results. We’ll never forget this visit.”

By ATD Fourth World’s team in the Central African Republic