Skip to content
Home > Participate in the World Day for Overcoming Poverty > 17 October, 2015: Join thousands on World Day to #EndPoverty 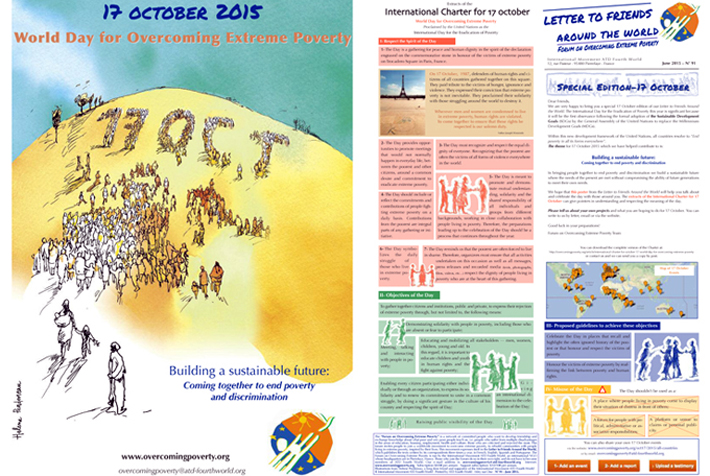 “Building a Sustainable Future – Coming together to end poverty and discrimination”

The above affirmation is the theme for 2015’s October 17, World Day to Overcome Poverty. Join us and thousands across the globe as we unite to reaffirm that poverty violates human dignity, and that we must work together across all social backgrounds to put an end to it.

Since 1987, October 17 has been a rallying point in the year for people living in poverty to speak out. It is a time for all to listen and bear witness to the courage and efforts of people who resist the crushing weight of persistent poverty and discrimination every day, all year round. It is a day to unite and recommit ourselves to work together. As diverse activists from different backgrounds have proclaimed:

“This is our day. We can express what we have in our hearts, without shame or embarrassment.”

“This is a day when our voice is heard, and where we are recognized with dignity in the struggle we take up every day.”

“October 17, 1987: this is the day when ‘the poor’ changed that name. They proclaimed themselves and were recognized as ‘defenders of human rights.'”

Get in STEP: Strive Together to End Poverty with all those joining this growing social movement. Find out about the history, actors, and actions of October 17 – World Day to Overcome Poverty at www.overcomingpoverty.org. Take part in a gathering near you, or create your own gesture or event in the spirit of the day. Add your voice and donate your social media reach by promoting the Thunderclap: “Pledge to #EndPoverty.” Events around the World

Here are just a few of the many events going on to raise awareness and mark the World Day for Overcoming Poverty. For a full list and more information/full explanation of the day, please visit: overcomingpoverty.org

Central African Republic: Despite the renewed spate of violence, ATD Fourth World members in and around Bangui have sent out this message: “We remain committed to coming together for our big October 17 assembly. With everything we’ve been through, it would be exceptional! Tell everyone that we’re still here, still bound to one another through our movement in order to support one another….We’ll do what we can on October 17.”

Mauritius Island: For the first time in Rivère Noire, the city council will organize World Day events at the entrance of the under-resourced neighborhood of Black River Cité EDC. A number of NGOs, people from across the island will take part with personal stories, music, and art exhibits. The invited guest of honor is the Republic’s former president and current president of International Movement ATD Fourth World, Cassam Uteem.

Canada: In Montreal, ATD Fourth World and partners invite the public to an evening of discussion and workshops around the misconceptions about poverty and prejudices against people who live it.

Cameroon: The group Friends of ATD Fourth World have run creative, educative Tapori Children’s Movement  workshops in schools in capital city Yaounde and nearby Soa for the past 2 weeks. On October 17, the French Institute of Cameroon will open its doors for the workshops to continue. An

exhibit of all the artwork and messages from the workshops, as well as storytelling, debates, games, and short films will take place in the afternoon.

Guatemala: In Guatemala City, young people with very difficult lives have been following creative workshops to express themselves on the theme, “A decent education, without exception, for a sustainable future.” To inform and mobilize people for October 17, they will inaugurate their exhibit “Artists, Artisans of Peace” on October 12 at the Italian Cultural Center. Ongoing forums, other relevant exhibits, poetry and other self-expression workshops will be on offer. Haiti: In Port-au-Prince, the national ombudsman office, the OPC, has partnered with ATD Fourth World and Lakou Don Bosco for a commemoration aimed to raise awareness among all level of society toward “the promotion of social, economics, and cultural rights.” A program including personal stories, songs, and theater sketches will take place at Lakou Don Bosco, an association that welcomes boys living in the street.

Philippines: Pursuant to previous Presidential Proclamations, National Anti-Poverty Commission (NAPC) is promoting an entire week of awareness-raising action from October 17 – 23. There will be a gathering at the Commemorative Stone in Manila’s Rizal Park on October 21. NAPC policy makers will exchange with the public based on a short theater piece prepared by ATD Fourth World members from Metro Manila and the Tulay Bridge community relocation sites.

United Kingdom: In Glasgow, Scotland, Bridging the Gap and The Poverty Truth Commission invite people to gather in George Square, where there is a replica of the Commem orative Stone, to “listen to people experiencing poverty, celebrate courage and resilience, and share commitments to action to eradicate poverty.” In London, ATD Fourth World has organized a day of activities at their national headquarters at Addington Square. There will be creative workshops, music, a short film, and the multi-media exhibit, The Roles We Play: Recognizing the Contribution of People in Poverty .

Ireland: Cross-community groups in Dublin, the Irish 17 October Committee Trinity College Dublin, the Trinity International Development Initiative, Oxford College, and ATD Fourth World UK have collaborated with All Together in Dignity Ireland to organize #EndPoverty month. Events include: the exhibition “The Roles We Play, Here and There; An Audience with Oxford Professor Robert Walker, author of the book “The Shame of Poverty”; a candlelight vigil to mark #ZeroHunger Day; and, a gathering on October 17 at Dublin’s Human Rights and Poverty Stone by the Famine Memorial. Elsewhere, in County Lough, the Connect Family Resource Center will gather people around photography and computer skills to address poverty “through collective action and empowerment.” United States: In New York City, the 2015 Commemoration of the International Day for the Eradication of Poverty (IDEP) will be held on Friday, 16 October at United Nations Headquarters. The program includes a message of the Secretary General, Ban Ki-Moon, keynote speeches by people living in poverty, as well as videos and a musical performance. In New Orleans, Louisiana an eventful and informative day will include a march against poverty, shared art activities, a story circle, and a shared meal at the First Street Peck Wesley United Methodist Church. In Clinchco, Virginia celebration at the Senior Citizen Center unite people around presentations, music, and a “pot-luck” community dinner.