A Common Struggle for Dignity among Migrants | Bruno Dabout 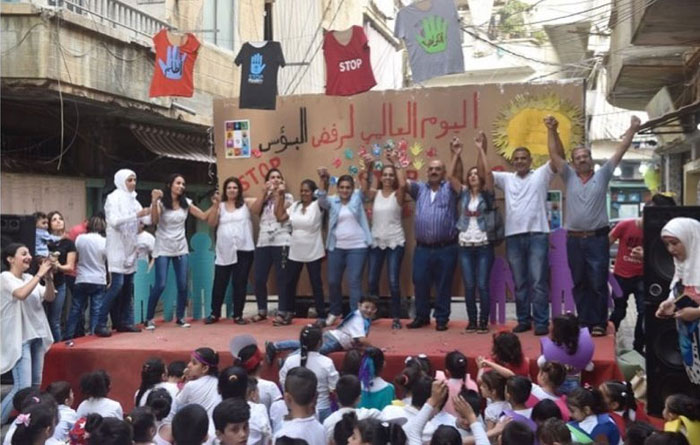 Above: World Day for Overcoming Poverty in Beirut, Lebanon with the association Beitouna

The number of refugees around the world is increasing at an alarming rate. But contrary to popular belief, Western countries are far from taking in the majority of people fleeing armed conflict. Generally, these victims seek refuge in another region of their own country or in a neighbouring country. These neighbouring countries are often experiencing similar economic and security instability.

According to the Office of the United Nations High Commissioner for Refugees, 84% of the world’s refugees are taken in by a developing country.

The difference between political refugees and economic refugees is also blurry. Many organisations have stated that the two situations are not as easy to distinguish as some politicians suggest. The word “migrant” itself can also sometimes have negative connotations for the general public or politicians. For Amani Al Tawhid, from the Centre for Political and Strategic Studies at Al Ahram (a weekly Egyptian newspaper), the key issue is that of poverty. In order to solve the migration crisis, he argues, we must first identify the root causes and then address them. And the main causes of economic migration are linked to lack of development.

In this migration crisis, what is ATD Fourth World’s role?

ATD Fourth World does not form a position on situations where we do not have direct interaction with the people affected. But we can emphasise our commitment to universal access to basic human rights. And we can demonstrate the involvement of ATD Fourth World members in supporting this on a daily basis. The three examples below are from Beirut (Lebanon), Marseille (France) and Uvira (Democratic Republic of the Congo).

In Beirut: ATD supports the co-existance of local people and migrants

Here, Syrian refugees who fled their country because of war arrive in Lebanon without any possessions. In the Naaba district of Beirut, 63% of the population are refugees. For more than 15 years, the Beitouna Association in Naaba has helped poor Lebanese families get to know migrants from a number of different countries. The challenge of coming together and living alongside one another is not new to Beitouna’s members, but the current situation makes it a priority.

Maya is a young Lebanese woman who has just joined the ATD Volunteer Corps while also working with Beitouna. She explains that some of the organization’s work aims to address these challenges. Projects focus on helping everyone in Naaba get to know each other and to live more harmoniously together. One project takes place at the Maktabeh library. Every Saturday there are events for children from all backgrounds and the library expresses appreciation for everyone’s individual culture and history. Other community initiatives include working with local officials to make sure that all children, even refugee children, have access to the small public park. And every 17 October, the streets of Naaba are decorated to mark the International Day for the Eradication of Poverty.

In Marseille: working with Roma families

In Marseille (France), ATD members have been working closely with a group of Roma families since 2012. Every Saturday, they organize a Street Library which follows these families from place to place, eviction after eviction. Their work requires them to be there in difficut times, as well as times of celebration, and to go to court if necessary.

One time, Roma families had taken refuge in an abandoned warehouse. The owner of the warehouse, the regional public land authority, invoked electrical and health risks related to the dilapidated facilities to justify the urgent eviction of the families. In response, ATD Fourth World filed a lawsuit along with the lawyers representing the Roma families and three other organisations: the League of Human Rights, Doctors of the World, and Gypsy Encounters. At the hearing, they cited legislation preventing evictions without relocation. They also cited the legal requirement to uphold the best interests of children who have the right to lead a normal family life.

This trial illustrated a situation many families (Roma or not) experience. Every time they try to settle in an unoccupied place, the police pursue them. No one offers these families a long-term solution to help them to develop their lives. “Migrant and local populations, a common struggle for dignity”,  a group composed of ATD members who work closely with these populations, leads a discussion forum on this subject. (Article in French)

Uvira, in the Democratic Republic of the Congo, is a town two or three hours drive south of Bukavu. It is very close to the border with Burundi, where there was conflict from 2016-2017. Many families from Burundi fled to Uvira. The Tapori group in Uvira told us that a child member of the group saw a refugee child from Burundi being beaten because he stole a mobile phone. This Tapori child tried to intervene, but he was also beaten. Following this event, the Tapori group children decided they would go visit the refugee children on 17 October, World Day for Overcoming Poverty. However, the children had to get permission from their parents, which was not easy.

On the day of 17 October, the children and the Tapori group leaders went to the refugee camp but were unable to enter. Faced with this obstacle, the Tapori children then decided to visit the children from Burundi where they often begged in the streets of Uvira. After a successful visit, they decided to organise a joint event, during which all the children had an opportunity to speak.

One of the children, Philippe, said, “As Tapori of Uvira we invite you to become our friends. I will not hurt you or throw stones at you.” Another child named Antoine said, “Thank you for your visit. I do not have any parents or brothers here in Uvira. Perhaps you could help me to find my parents.” A refugee child named Olga described her struggles: “In Burundi, I studied. Here I am unable to study. I walk around the city begging so that I can get something to eat in the evening. My parents stayed in Burundi. We got separated when the bullets made a lot of noise. I now need to go back to my parents. I think a lot about them.”

Some refugees have suddenly lost a comfortable life and end up with nothing. Others had already experienced poverty before a war broke out and made them lose the little they had. And still others suffer the violence of poverty that is not even the result of an armed conflict. However, the solidarity that we see in Beirut, Uvira and Marseille reminds us of a simple truth. As ATD Fourth World founder Joseph Wresinski stated, “Poverty is a violation of human rights. To come together to ensure that these rights be respected is our solemn duty.”