A Legal Victory for the Defenseless 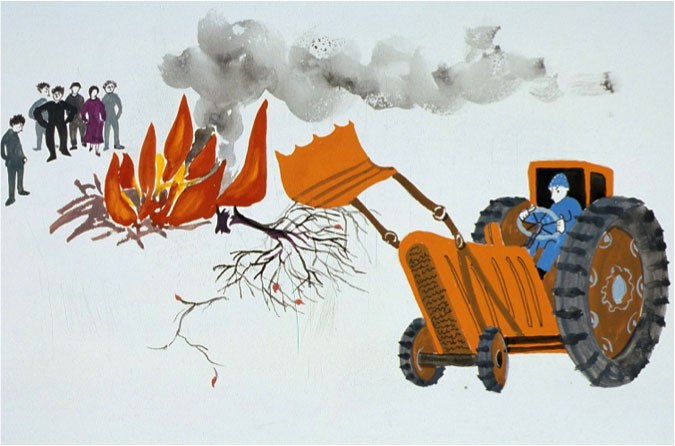 Basket-makers Charles Weiss and Anne Hoffmann settled in Hoerdt, a small town in Bas-Rhin in Alsace, France in 1962. They made their home outside the village on the banks of the Zorn River where willows for their basket-making grew. The family lived in a trailer, surrounded by a few makeshift huts.

In January 1974, following thefts attributed to children in the family, villagers came to threaten their home, going so far as to fire shots.

Frightened, Mr and Mrs Weiss and their children left the site and fled into the woods, leaving behind their caravan, two dogs, furniture and some belongings, clearly in the hope of resettling once calm was restored. That was 13 January 1974.

The next day the Mayor of Hoerdt arrived on site with a bulldozer to “clean” the land and prevent the Weiss family from resettling. The dogs were slaughtered, the camp burned down and the ground razed.

Afraid, the Weiss family hid in the forest. Without an established civil status and unable to read or write, the couple could not take legal action to defend their rights. Alerted by a press article, ATD Fourth World decided to file a complaint for “violation of residence and destruction of inhabited areas” to prevent such hostile behaviour towards people in poverty from happening again. However, French law at that time did not allow an association to act on behalf of a private individual.

Thus began a long legal battle. Henri Bossant, a full time member of the ATD Volunteer Corps, worked for 10 years to win the right for an association to enter into legal proceedings on behalf of individuals. In addition, André Richter, an ATD Fourth World ally in Alsace, was committed to helping the family and would not give up on them.

On February 10, 1977, a decision was issued by the Indictments Division of the Court of Appeals in Colmar allowing an association working to eliminate exclusion, such as ATD Fourth World, to exercise the rights held by a private party and act on behalf of persons incapable of defending themselves. This right exists even when the association is not directly involved.

The court recognized that because of their extreme poverty the family was unable to defend themselves, depriving them of their entitlement as citizens to access justice. ATD Fourth World’s complaint was thus declared admissible.

Following the admission of this complaint, the proceedings were lengthy. On April 21, 1983, the Metz Court of Appeals found the mayor guilty of the destruction of movable and immovable property belonging to others. However, taking into account “the circumstances of the case, the duration of the legal proceedings and the resulting trouble having ended,” the Mayor was exempted from punishment and ordered instead to make material and moral reparations to the Weiss family and ATD Fourth World.

The right of associations to fight social exclusion by taking legal action on behalf of excluded parties was enshrined in law on July 12, 1990, and can no longer be contested.

The cause of the Weiss family was not the first defended by ATD Fourth World, but it was the first that led to a real legal advance by amending the code of criminal procedure. Today, ATD Fourth World’s legal battle is often taught in the first year of Law courses in France to demonstrate how law is developed.