A Meaningful Foundation for Friendship in Africa 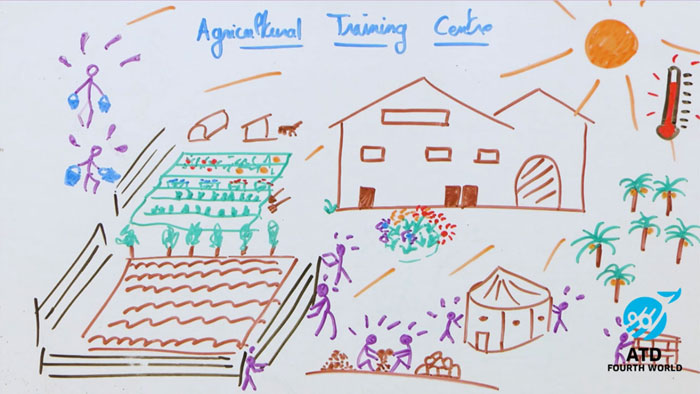 This is the eighth in a series of videos retracing the life of Mary Rabagliati, who helped Joseph Wresinski co-found ATD Fourth World.

In the years following her 1973 visit to South Africa, Mary had got to know people struggling to overcome poverty in Kenya, Nigeria, and elsewhere in Africa. By the early 1980s, ATD was stronger than it had been in the early years, with far more means at its disposal. Mary, however, had lived through the early days of the movement when its only resource had been a determination to defend the dignity of families in poverty through direct action. She was convinced of the importance of preserving that ethos. The time had come, she felt, for ATD to re-examine its priorities:

“What are our priorities in a world where people in poverty are being crushed, humiliated, and excluded more than ever before? I’ve now come to the conclusion that it is important for our Volunteer Corps to start again from scratch; and to do so by getting to know people in extreme poverty in Africa and elsewhere in the developing world.”

With this aim in mind, Mary travelled widely throughout Africa in 1983 and 1984. She returned to South Africa and also spent time in Burkina Faso, Ghana, Kenya, Lesotho, Senegal, Togo, and Uganda. In early 1985, Mary and a teammate returned to West Africa to visit Sierra Leone. Mary wanted to meet and learn from people facing the most extreme poverty and exclusion. In addition, she wanted to meet the individuals and organisations that were offering these people friendship and support.

Partnership with the Boys’ Society

One of the organisations Mary visited was the Boys’ Society. It’s goal was the “rehabilitation of delinquent, rejected, or underprivileged boys.” The organization worked mainly with the growing number of children living in the streets. In addition it ran two residential centres in the city and an agricultural training centre in a rural setting. The co-ordinator of the organisation was Reverend Michael Samura. He was a remarkable man who had himself grown up on the streets of Freetown. Reverend Samura knew everything there was to know about the dangers and temptations that children and young people faced. 1985 was International Youth Year.  Mary’s encounter with Michael and the boys gave her the idea to mark this event by organising a joint project between ATD and the Boys’ Society.

A Different Approach to Development

That December, after months of preparation, Mary returned to Freetown. She brought with her eight other members of the ATD Volunteer Corps for a three-week work camp. At that time, many non-profit organisations founded in Europe were funding development projects in Africa. Most projects were based on a traditional top-down approach. In other words, it was the European donors who chose the priorities and the methods of implementing them. Members of the local community usually had very little say or involvement. However, Mary’s approach was completely different. As one of the ATD team recalls:

“We wanted to show that not all white people were rich donors. Our goal was to offer concrete support by rolling up our sleeves to help the boys with their own project. I understood that Mary wanted to share with them our commitment to fighting poverty and exclusion in our own countries. It seemed to me that she thought that the best way of demonstrating this would be to do things together, learning from one another as we created something.”

It was an approach that brought rich rewards to everyone involved. This is how Mary described the outcome of their joint project:

“Getting to know the boys and the country was a very special experience. We were wholly committed to it in our hearts; and we found the same commitment among the boys and the different members of the Boys’ Society. All this made it far, far more than just an academic field trip. It was the most meaningful foundation for friendship that words can express, and it taught us how to go about establishing a long-term presence in other countries of Africa.”