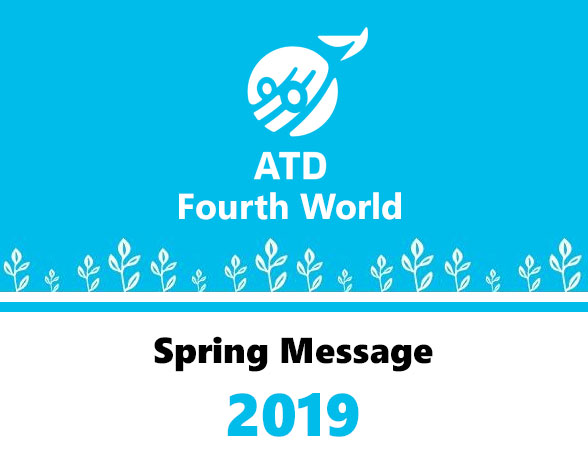 “Since we have put our hope in community, we carry responsibility for the future of humanity.”

Marimar works as an ironer. This job doesn’t pay much but it gives her the strength to persevere. She recently participated in an ATD Fourth World gathering in France for men and women from 23 different countries who spoke 12 different languages. I listened to her talk about her life’s journey:

“I inherited poverty. Perhaps my daughters will also inherit it. A little less, I hope, because I have learned to move forward with my eyes wide open, open to my own life, but also open to the suffering and joy of others. The ATD Fourth World movement has made me more fully a person because it has brought meaning to my struggle. I took charge of a Tapori group in my neighbourhood. This allows me to provide a place where children can grow up with the values that we often can’t provide them with due to life’s difficulties.”

“What could I give her? I don’t have enough for myself?”

Marimar’s words echo those of Thérèse from the Congo who also attended the international gathering. Thérèse, who works as a porter, said, “I am 56 years old now and I can only carry 40 kilos on my back. But I want to show support to those who are even more worn out than I am. At times my neighbour has nothing. What could I give her? I don’t even have enough for myself. Our movement aims to lift up the people who are most in need, so I say to her, ‘Friend, get up and keep going; you can do it.’ I offer her half of what I have to carry. We share the work and the money. I will earn less, but she will gain a little. If we all acted like that, there would be no more poverty in this world. People wouldn’t be equal—some would have maybe $1,000 and others $100—but no one would be destitute and everyone could live in dignity.”

Taking a risk to stand up for families in poverty

At this international gathering, Marimar and Thérèse met Aliou, a municipal official in a large city.

“Occasionally, they ask me to carry out policies to evict very poor families. Sometimes, I say no to the mayor because that would make us advocates for the government rather than for people whose lives are so difficult.”

Marimar, Thérèse and Aliou are doing things that are more innovative than we can imagine in order to counter a global trend that is trying to crush women and men, families and entire communities. They should inspire all of us.

When we bring different people together it broadens our horizons and challenges us. In building a movement we can draw on our courage and deepen our intelligence. We can cement networks that undertake unprecedented initiatives and develop projects that change lives. Henri, from the Central African Republic, once said:

“The road is long. When we unite, it gets shorter.”

You believe as we do in the importance of getting to know people around the world like Marimar, Therese, Aliou and Henri. Our goal of building a common humanity among all people is also in your hands. Thank you for your donations and support, which make our work possible.