Skip to content
Home > Europe > France > A Year Without Begging

A Year Without Begging 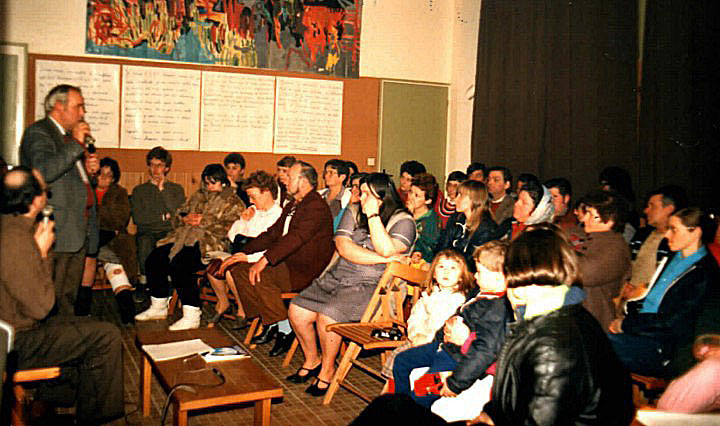 From one family’s perspective: the trial of a “guaranteed minimum family income”, which inspired the minimum income scheme (RMI) in France.

He was about 12 years old, tall and skinny, manoeuvring a woman’s bike that was too big for him to sit on. He pedalled standing up all the way along the road from his house to ours. His family lived in a house beside the level-crossing of an abandoned railway line on the outskirts of town. He knocked on our door and held out a scrap of paper to my mother without saying a word, his head lowered. My mother went to fetch an envelope and her purse, slid a few coins into the envelope, and gave it to the child. This scene was a regular occurrence. My mother simply told me: “Their father is gone. They have no money coming in.”

The boy’s attitude never left me. Other children in the neighbourhood came knocking on my door with a few words, like Virginie who would always say, “It’s me again to bother you”. How many children carry the burden of poverty so early in life? We feel uncomfortable in their presence, overwhelmed by our powerlessness.

Our responses leave a bitter taste. We know that they won’t make the slightest difference.

I had the opportunity to write about a family who shared their life story with me. The story was one of struggle to feed their children, to send them to school properly dressed, to pay rent, water, and electricity; a life where the essentials were never guaranteed.

The eldest boy often went to help his father collect scrap and cardboard to resell. He only ever found occasional work doing small seasonal or temporary jobs with no security. The eldest girl knocked on doors to ask for milk, pasta, or oil.

In 1984, this family participated in a guaranteed-income trial.

During this period, Europe was aware that, despite its prosperity, thousands of families were living hand-to-mouth. It was looking for a solution and fluctuated between granting targeted one-off payments and providing regular financial support over a period of a few months, mostly to meet the needs of families. Behind this indecisiveness lay the question of trusting people in poverty to properly manage their own finances. At the French Economic and Social Council, Joseph Wresinski worked on the report, “Chronic Poverty and Lack of Basic Security”.

ATD Fourth World put in place various trials to develop a comprehensive policy to fight poverty. In Ille-et-Vilaine, in north-west France, it initiated a “guaranteed minimum family income” scheme with local partners and evaluated it with the families involved.

Throughout the trial, I learned about the large number of projects that this family had in place. The father started a business repairing bicycles and mopeds. He built a trailer commissioned by his trial advisor. The family gave back the money that they owed in various places. The children were sent to school with the right materials. At Christmas, they received toys from their parents. The family was able to rent a tent and go camping for their holidays, not far from their house of course, because they didn’t have a car and had to transport all the equipment by moped.

During this time, the children learned how to smile again and how to enjoy their childhood. They no longer had to ask for money. The family no longer had to beg. They discovered the possibility of living a different life.

The mother told me, “Guaranteed income has allowed us to buy more food. It has allowed us to manage our budget a little better. We are able to make ends meet. Our advisor lets us manage things ourselves. We bought beds, mattresses, a cabinet. My husband bought tools, things he needed to repair bikes and scooters. I paid for workbooks, paper, pencils — everything the children need for school. The kids were happy. Before, when they asked for something, I couldn’t get it for them. We bought a mountain bike at Christmas. Our eldest needs glasses; the lenses were reimbursed, but not the frames and I had enough to pay for them.” The family was very active in evaluating the experience, as they knew it could help improve the law to better serve the people who live in the deepest poverty.

The father said, “It’s ending for us, but others should have access to this income. The government must be told. I am proof that it is possible to get out of poverty. I was dirt poor, certainly more than most, more than you can imagine. People in poverty will always stay poor unless a miracle occurs. It is not people in poverty who complain the most or have the loudest voice, because when you’re poor, you’re at the bottom of the pile. We have as many qualities as the rich. We try to work so that our children can succeed in life.”

Their story is told in an evaluation of the trial under the title “A Year Without Begging”.

In France in the years that followed, the “guaranteed minimum family income” inspired the “revenu minimum d’insertion” (RMI), which offered a minimum level of resources. It was not part of a comprehensive policy, and the low level of funding and administrative flaws did not allow families to put as many projects in place. However, it provided a safety net for people in need until it was replaced by a different scheme in 2009.