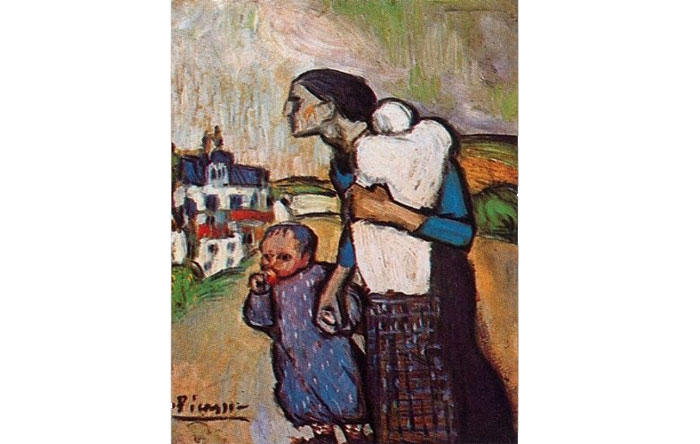 Martine LeCorre grew up in poverty and is now a member of ATD’s International Leadership Team. She describes how other people’s views about poverty can undermine efforts to overcome it.*

When someone has been through a terrible ordeal, everyone thinks it is normal that the person suffers from trauma. The same is true, of course, when people experience unbearable poverty. Who would question this? No one could experience such misfortune, suffering, humiliation and denial of human rights without suffering the consequences. But the issue of the vulnerability of people facing poverty is more insidious. What lies behind this issue?

Generally, people see fragility and vulnerability as simply what people in extreme poverty live with. Society has always had great difficulty in recognizing that poverty is a violation of human rights, an attack on equal dignity, and that those who experience it are in fact victims. The question of their responsibility comes up time and time again. “If they live that way, it must mean they want to, they aren’t trying or they aren’t doing what they need to do in order to escape. It’s because they are too vulnerable.”

The issue of people’s vulnerability makes it possible to avoid ideas that might call into question personal, professional, and political choices as well as priorities. And very often seeing people living in poverty as vulnerable makes it possible to distance oneself, to mask a certain cowardice, and thus to accuse people in extreme poverty either of being responsible or of being “predestined” to this inevitability that is poverty.

For decades, every year and without fail thousands of young people leave school without having learned anything. Without fail people say that these children are vulnerable and that this vulnerability is a major factor in their failure. However, as Maria Theresa told the President of the [French] Republic, E. Macron: “It is not our children who fail in school, it is the schools that fail our children.” And she’s right.

A will to survive against all odds

Yes, people living in poverty are becoming more and more vulnerable as they carry within them the stigma of violence and suffering that comes with living in poverty. But we have no right to isolate them, to lock them in this representation of vulnerability, without talking about resistance. Yes, poverty makes the people who experience it vulnerable; that is clear. But this can keep us from seeing their will to survive against all odds, not only to survive, but also to live their lives. Almost no one sees this; almost no one talks about it.

When we truly face the terrible consequences of poverty together, we discover the unceasing courage of those who experience it. I am thinking of Jérôme who takes people into his public housing. He can’t tell anyone because he is not allowed to do this. But he also has experienced being without a home and cannot stand to see others in that situation. I think of Ludivine who asked her mother to meet in the town square to see her little girl when social services forbade her to do so.

When we who are part of the world of poverty look at our history and our personal experiences, we discover that there are causes for our families’ vulnerability. Economic changes and competitiveness at work have weakened us, sometimes so much so that working is no longer possible. Evictions from our homes and having to wander the streets have sapped our strength. We have been undermined by the measures that are supposed to help us. These measures often exclude us even more because they do not allow us to succeed. Even the assistance that prevents us from being actors in our own lives and that people then hold against us, this too takes away our strength.

Generally, we do not experience only one of these situations that I have just mentioned, but rather all of them, one after the other, or at the same time. But in the background of these situations that are all too visible to those who question us there is something that they do not see. They do not see our resistance, our initiatives, or the projects that we undertake. These seem insignificant or even senseless to others in view of our situation. So many things took away our strength and we became vulnerable, and thus only vulnerable, in the eyes of everyone else. And so we remain silent, consumed by guilt and uselessness.

They only saw our social position

My generation of the 60s and 70s born in poverty grew up in slums and commuter towns rife with unemployment. It was at school that we realized we were not like other people and that when they looked at us they would only see our social position.

I didn’t have the words to say “injustice”

Each of these words has had an impact on my life and my past, on all our lives and our common history. I bowed to the judgments of others. I ended up internalizing these words and believing that my life was not worth much. I didn’t have the words to say “injustice”, the words to fight back, the words to defend myself.

Deep down, however, despite everything, I managed to preserve a rebellion that remained silent. I still felt it somewhere in my heart. I was 18 years old when I met the ATD Fourth World Movement that Joseph Wresinski founded in 1957 in the midst of a slum called Noisy le Grand (France).

I experienced this meeting with [ATD] as a real opportunity. Finally, the revolt that hid in silence at the bottom of my heart could express itself. ATD offered a great challenge, an ambitious struggle alongside other people!

I saw that I was not a loser

All these new words and ideas helped me to make sense of my life and to see that they could also be transformed into action.

Others do not look at us as people

I understood, as we all have, how much others consider we people in poverty as less-than. Others do not look at us as people. They see us through what we lack: housing, work, hygiene, resources, and understanding. And they see us through what they judge to be “too many”: too many defects, vices, faults, or addictions. They say we are too violent, too resigned. We have too many deficiencies, too many weaknesses that make us merely fragile creatures. They come to believe that we are completely incapable of thinking or of knowing anything of significance.

Recently, in a court case concerning placement of children in foster care, one of the judge’s arguments was to blame the parents for not going to food banks. The judge claimed that this reinforced the family’s fragility, whereas for them, not going to food banks was an act of resistance. It was refusing to be dependent.

A protective attitude becomes a relationship of power

Protecting families because they are considered too fragile or too vulnerable is dangerous and deeply unfair because it means that you don’t expect anything else from them.

This protective attitude turns into a relationship where others exercise power over us so that we must struggle for respect of even our most basic rights. Families refuse to become what others want them to be: obedient and submissive because of their fragile, vulnerable nature. We must begin to acknowledge the strength and resistance of people in poverty instead of seeing only their vulnerability.

The lesson that poverty has to teach us

In fact, “vulnerability” can be seen as something positive in a relationship between people. To be vulnerable is to allow yourself to be moved by other people’s thoughts, ideas, opinions and actions. It is to leave yourself open to the other person instead of remaining closed off in your own certainty.

If we do not allow ourselves to become vulnerable with regards to people in poverty, if we refuse to let their suffering push us to take action, then we are in a sense denying both their experience and everything they already do to resist their circumstances. And we will never be able to learn the lesson that poverty has to teach us: if we are to overcome poverty, it is critical for all of us to join forces and for all of us to work together in a common endeavour that will finally bring it to an end.

*From a November 2018 address at the University of Caen, France.