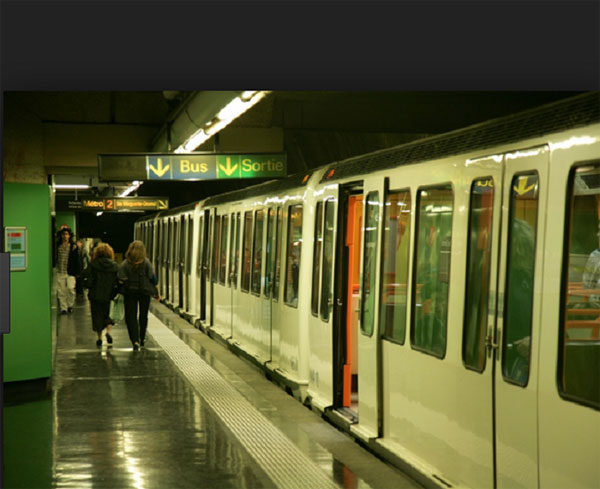 In 2017 ATD Fourth World invited people around the world to document real-life “Stories of Change” starting from situations of injustice and exclusion caused by extreme poverty. These stories, from activists, community leaders, and others, show that when people work together, real change can happen. For more about the “Stories of Change”.

Selling poems on the subway leads to an unexpected encounter…

I used to sell poems in subway cars in Paris. I did it by choice.

Most people who work informally in the subway — musicians, beggars, people selling things on the sly — haven’t chosen to be there. They have been left with no option but to depend on others’ goodwill — this is a humiliating situation that is met with hostility from many passengers.

Many workers – hopeless – turn to drink, use drugs, or get in fights on the station platforms. Poverty and isolation bring out violent and self-destructive behaviour, which in turn makes subway passengers uncomfortable and suspicious.

During my time on the subways, I came to know some of these people, beaten down by humiliation. In particular there was Eric. Small, stooped over, thin, toothless, Eric would move through the aisles of the subway cars carrying a bag containing all his worldly possessions. He slept on the platforms. Whenever we would cross paths he would say hello —  it was like that for months before we would really speak. On the subway, everyone knows each other from a distance, but personal connections are rare.

One day, while the subway was stopped because of a suspicious package, Eric and I spoke for a few minutes, and at the end he asked me for one of my poems. Of course I was happy to give him one.

The next time our paths crossed he seemed embarrassed. He wanted to ask me for a favour, not an easy thing to do among subway colleagues. The conversation was a circuitous one.

“My ex doesn’t want me to see my children. She’s right, I’m not a good father, but how can I be a good father if I can’t see them? I try, but I don’t have anywhere I can have them over, I don’t have a home of my own where they can stay, I can’t buy them things…”

“How many children do you have?”

“The oldest is turning twenty. My son is seventeen, he doesn’t want to talk to me at all any more. The little one is turning twelve — it’s her birthday next month.”

“Will you be able to see her?”

He hesitated. “Could you write a poem for her?”

“Of course — what does she like? What makes her happy?”

A deeply sad expression passed over his face — he didn’t know. He had seen his daughter so rarely over the last few years that he barely knew her any more.

I spent hours on that poem. Since I didn’t have any more information I chose to write about the love of a father for his daughter. I kept it in my pocket for a few days, and then passed it to Eric when I saw him on the subway.

I didn’t see Eric again for a few months. I wasn’t worried — when you don’t see someone again on the subway that can be good news as much as bad news.

When I finally came across him again,  Eric was smoking a cigarette between two trains at the end of the platform. He almost picked me up in his arms. The poem didn’t just make his daughter happy but also his oldest daughter and even his son. He had found a temporary job at the Batignolles market and the next weekend he was going to see his children, in spite of their mother’s hesitation. He asked me for another poem.

It wasn’t the poem that changed Eric’s family situation. What was in the poem was what he already felt, and if he had had a chance he would have expressed it.

What mattered was that he was able to participate in a family event and bring along something unexpected, something that cannot be bought. Something that let his children see that he thought of them, even if he couldn’t see them.