A Different Kind of Development in a Rural Community in Brazil 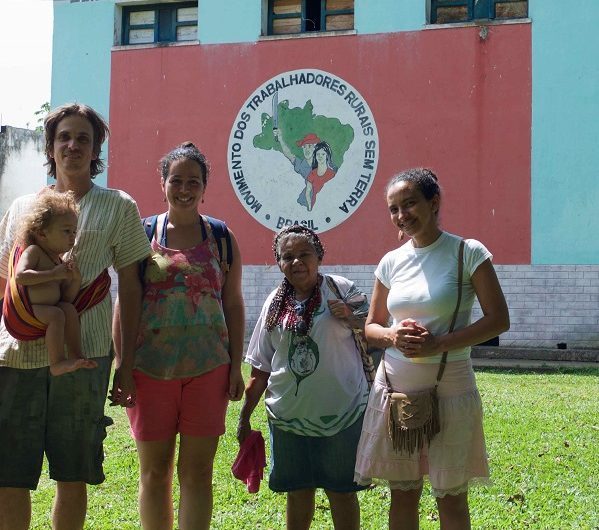 Brazilians Mariana Guerra and Eduardo Simas, along with their three children, are currently sharing the life of modest villagers. They are getting to know the indigenous communities and the Landless Workers’ Movement,* in order to collaborate in their common struggle against poverty.

For five years, Eduardo (39) and Mariana (37) have been living in Mirantão.  Mirantão is a village situated in the state of Minas Geiras, at an altitude of 1100 metres and far from the beaches of Rio. They know the majority of people living in the area, and have been welcomed by the thousand inhabitants scattered in the mountain region. In their small old car, they pass farmers on foot, horse ranchers, and roaming cows.

As with all ATD Fourth World teams, the couple care about those people who are most excluded because of their poverty. They do not hesitate to travel kilometres to visit Donga who no longer has electricity, Julia who cooks on a wood fire, or Paola whose son is in prison. With a sense of simplicity and humanity, they listen to everybody’s concerns.

Mariana attended a meeting with mothers who requested that a fifth class be created at the village school. Without it, children must go to the nearest town, more than an hour by bus.

The couple works with a community construction site dedicated to building the earth walls for families’ new homes. Adults and children dig the earth, transport it, and then throw the wet earth by hand on the braided reeds. Mothers bring food and cook it nearby. It is no longer work, but a party.

Along with Eduardo’s parents, who live in Pétropolis, in the suburbs of Rio, the pair of ATD Volunteer Corps members and some friends are establishing a Street Library in a favela. In the state of Bahia, Eduardo and Mariana are supporting the Indians. They experience discrimination in Brazil and are considered inferior by the descendants of colonizers from Portugal. Organised in large families, they rear animals, cultivate cassava and potatoes, and hunt and fish in the wild.

Eduardo and Mariana have gotten to know Maya (pictured above) who defends the cause of the Indians in an increasingly threatened nature reserve. Agro-business lobbies are pushing back laws, established under President Lula, that protect the environment and defend the poorest . In another region, Eduardo and Mariana have become acquainted with a community of the Landless Workers’ Movement. They have made friends with Solange (pictured above) and the 52 families who work the land together. They produce organic food and prioritise crop diversification, reforestation, medicinal plants, coffee, and chocolate. Every family has enough to eat and the leftovers sold at affordable prices to the most deprived people in the area. The Landless Workers’ Movement also builds schools and clinics, and trains farmers and educators.

“It is important to connect the inhabitants of Mirantão, the Landless Workers’ Movement, the Indians, and all those who are working towards a more fraternal world,” emphasise Mariana and Eduardo. “Their potential and their enthusiasm provide hope and potential for positive change.” Eduardo and Mariana talk about their work and why it is meaningful to them:

“We first discovered ATD Fourth World in 2004 and worked in Peru, Bolivia and France. Our personal search for meaningful work brought us back to our own country, to our ancestral roots, and helped us discover life in the countryside.

“Today, we are living in Vale in Prata, a small community with modest farms in the rural district of Mirantão.  Prata is sixty kilometres from the town of Resende, with hospitals, banks and supermarkets. It might look isolated. However, we interact deeply with other people. We are trying to get away from the principles of individualism that results in both accumulation and scarcity.

“We are experiencing something extraordinary in today’s world: being attentive and giving our time to others, having the ability to share, living a life of richness in so many ways. We are living with people who are forging new paths to preserve the planet based on their own challenges. Also, we are learning to live at a different pace in an area where people are resisting, and re-inventing a new economy. This influences many areas of our lives: our children’s school attendance, and our involvement with other parents in quality education for all. It changes our relationship with the earth and agricultural production, our recognition of traditional knowledge, our… participation in the community. It influences our communication with public authorities and movements, even our spirituality. This spirituality connects us to ethnic groups, including the indigenous people, Pataxó Hã-hã-hãe à Bahia.

“Beyond our local roots, we are all connected to the people of Petrópolis and Morro dos Anjos. Along with the Indians of Bahia, and the members of the Landless Workers’ Movement. By living in this way, we are offering the best of ourselves to build a society free of poverty and the suffering and violence it creates.”

* The Landless Workers’ Movement emerged in Brazil at the start of the 1980s. Following the land occupations in the state of Rio Grande do Sul. It calls for agricultural reform. In particular a more equitable redistribution of land. In Brazil 1% of the population owns approximately half of the cultivable area. The Landless Workers’ Movement stands up for agricultural production that respects sustainable development.