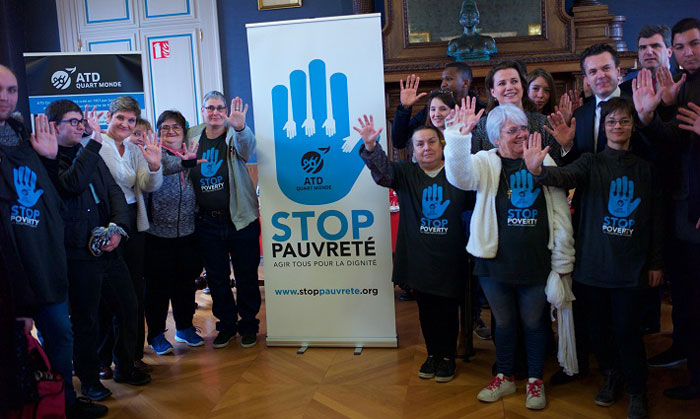 “Here in Angers, we have a special connection with ATD Fourth World. This is the city where Joseph Wresinski was born. The city where he lived a life of poverty and first rejected the humiliation that came with it. The city where he found his vocation and developed his philosophy that we must come together to fight for dignity for all.” Christophe Béchu, Senator – Mayor of Angers.

On February 11 and 12, the local ATD Fourth World team and the town of Angers organised a number of events (concerts, conferences, plays, a reception at the town hall) to celebrate the centenary of ATD founder Joseph Wresinski’s birth as well as the international launch of the Stop Poverty campaign.

More than a hundred ATD Fourth World activists hailing from various regions of France, Switzerland and Luxembourg, gathered last Saturday along with friends and partners, closely followed by radio and television crews. Together they walked “in the footsteps of Joseph Wresinski” through the Saint-Jacques neighborhood where he lived with his family. This was a moment to commemorate a life of poverty and to highlight the experiences of other families who are still living in these conditions, many of whom have joined in the fight that he once led. The party paused in front of the house at 14 Rue Saint Jacques, before continuing to the Bon Pasteur church, where Joseph went every morning from the age of 5 to serve Mass and earn money for his family. Sister Noreen O’Shea of Notre-Dame de Charité du Bon-Pasteur, welcomed the entire ATD Fourth World delegation in the Bon Pasteur chapel. She spoke of the ties of friendship that united the Wresinski family and religious groups for many years.

Then Jean-Luc Marais, a History lecturer, gave a speech on “The Saint Jacques neighbourhood and poverty in the time of Joseph Wresinski,” recalling the living conditions of foreigners who arrived in the town in 1917 and at the internment camp where Joseph was born.

A theatre company from Mayenne reinterpreted “The Suppliants” by Aeschylus (an ancient tragedy), to tell the story of refugees from various countries. The pertinence of its subject deeply moved the audience, highlighting the challenge of welcoming outsiders.

The Launch of the Global Stop Poverty Campaign

However it wasn’t just about celebrating a birthday. “If we are assembled here…” said Isabelle Perrin, Director General of International Movement ATD Fourth World, “it is not to celebrate the past, for Joseph Wresinski is not a man of the past. His life and his philosophy open up new perspectives for the future.”

“The philosophy of Joseph Wresinski tells us that every human being is capable of raising themself up,” Lenfant told the crowd, “Of standing tall. If we are imprisoned by dependency, we are no longer human. Being human means moving forward, creating, being able to shine.”

Isabelle Perrin gave a call to action as part of the Stop Poverty campaign (which will be open for signatures all year) and invited young people to join the movement and give life to its founding ideals.

“Throughout this campaign year, which marks 60 years since the creation of ATD Fourth World, we want to open up the ATD Fourth World movement to young people so that they can find inspiration, strength and the courage to act (…) All those young people who refuse to leave behind some parts of humanity while the rest progress, we want you to know that you can count on the experiences and convictions of Joseph Wresinski.”

The message was received loud and clear by the numerous young people present, including the students of Joseph Wresinski High School who showed their solidarity by making a €3,000 donation to support the work of ATD Fourth World.

The afternoon continued in the very place where Joseph Wresinski was born, on the site of a former internment camp for foreigners (now Bellay High School). A concert was held, bringing together texts from Joseph Wresinski’s childhood read by Michaël Lonsdale, and Stabat Mater by Pergolesi sung by Laurence Benezit (soprano) and Marie Gautrot (mezzo-soprano). The music provided a moment of absolute beauty, giving time to reflect on the texts in which Joseph recounts the courage and love of his mother, the humiliations they lived through and ultimately the activism forged in his rejection of poverty. These childhood experiences became the origin of a vibrant call for collective action. From the UN to Angers, from Paris to Bangui, from the Netherlands to Tanzania, the Stop Poverty movement has been launched! The campaign will last until 17 October 2017. Now it’s up to you to take part. Join us at www.atd-fourthworld.org/stop-poverty.