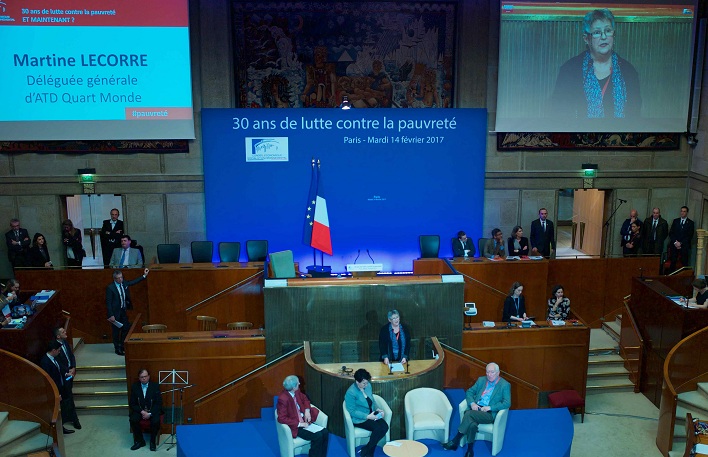 14 February 2017 – Martine Le Corre gave the following speech to the special plenary session of the French Economic, Social, and Environmental Council in Paris. She spoke on the 30th anniversary of the publication of Joseph Wresinski’s report “Chronic Poverty and Lack of Basic Security”.

I am both very moved and very proud to be here today. Father Joseph had a dream for his people that we would one day climb the steps of the Elysee Palace [meeting place of the French Council of Ministers], the United Nations, and the Vatican to add our voices to debates that take place there. We have climbed these steps. I say “we” because in this room today are people who have been trapped in extreme poverty. We will continue to work with you to achieve the dreams that Wresinski had for all of us.

To talk about Father Joseph, I need to return to the past for a bit. My family had great difficulty finding its place in a world that rejected us. Once, after a great deal of trouble, we were rehoused in a neighbourhood of transient people where just about everyone had a tale of misery. I had no idea that moving to that neighbourhood was the luckiest thing that would ever happen to me. I was 17 and had left school several years earlier. Not that I didn’t like school. I was an excellent student. I loved school, but school never gave me a chance to do well. School was not for children like me.

One day, two volunteers from ATD Fourth World came to live in our neighbourhood. To make a long story short, we grew to trust these volunteers after testing them in any number of ways. After a while they invited me to a gathering of 300 French young people and I agreed to go.

It was at this meeting that I realized there were many other people who resembled me in a lot of ways: in their words, their gestures, and their actions. It was so wonderful to realize there were other people like me, that I was not alone.

It was also at this gathering that I first heard Father Joseph speak. He had an energy and enthusiasm I had never seen before. He told us how proud he was of us. He said that he believed in us, and that he knew we were capable and responsible. He talked about how much he was counting on us and how much he had confidence in us. He said, “You are not just anybody. Be proud of your determination and spirit – this is the same courage and endurance that your parents have.”

It was hard for me to believe what he was saying, what audacity he had! And above all what incredible energy he gave off. Everything that came out of his mouth was what we did not dare say out loud ourselves because our poverty trapped us in shame and guilt. It was clear this man was one of us!

His words affected me deeply and made me want to work with other young people in my neighbourhood. Father Joseph’s energy and sense of purpose were infectious for me as they were for so many other people.

Some of you were here when he first addressed the Economic, Social and Environmental Council. You saw him take the podium. You served with him on various committees, as he became the principal author of the report “Chronic Poverty and Lack of Basic Security”. It took time before he gained your trust and before you understood what he was talking about. At first it wasn’t clear if he was speaking for single women, for immigrants, or for people dependent on social welfare. Who was he talking about?

An ATD survey, conducted in the city of Caen, helped members of the Economic, Social and Environmental Council to see and understand a part of the French population that they had overlooked. Father Joseph even took members of the Council on site visits to meet the poorest of the poor, his people. All this helped them give meaning to the term “people living in chronic poverty and economic distress”. The “Wresinski report” that you adopted led to the minimum wage and guaranteed health insurance. It started our country on the path to addressing poverty through the lens of human rights. We join you in being very proud of this historic groundbreaking work!

We honour Father Joseph whose struggle we have inherited. A young woman named Isabelle describes how ATD Fourth World made a difference in her life: “[B]efore knowing about ATD Fourth World, I lived in shame and fear of being judged. I never met Father Joseph but I know what he would have expected of me. He has helped me to be strong and proud of myself, to be proud of where I came from, and to no longer be ashamed of my name. Because of him, I have the self-confidence to reject being labelled as just another social work case, and today I stand up for myself and my neighbours.” All the people who join ATD’s work around the world – because we are an international movement – share this sense of self-confidence, pride, and determination.

Each and every one of us is involved in this struggle in our own neighbourhood or area of work, just as all of you in this room are. We have no other option but to join together, to share our expertise. This is essential. Father Joseph reminded us always that we should not struggle alone against violence and poverty. We alone cannot overcome poverty; neither can you by yourselves.

Father Joseph’s ideas and way of working are still relevant today. One hundred years after his birth, his challenge remains with us. We need to win the right to live as a family. Today, children are still arbitrarily taken away from their parents. Instead of talking about child protection services, we should be talking about protecting families.

We need to be assured that every child leaving the educational system knows how to read and write, and has options for further education or access to employment training.

Today we still direct too many children from my background into “special education.” This is profoundly unjust. We also need to continue to address the injustices in our country that still today force men and women into homelessness.

This is violence. Extreme poverty is violence. We will not accept this violence and we will continue working to overcome it. This is why we proudly pursue the legacy of Father Joseph, this incredible man, born in poverty 100 years ago.

This is also why we continue to believe in you. You have shown us that the struggle against poverty belongs to everyone, including you here in the Economic, Social and Environmental Council. What we do here will become part of the world’s future.