Skip to content
Home > Europe > Germany > Anna in Germany: Committed to Refugees and People in Poverty

Anna in Germany: Committed to Refugees and People in Poverty 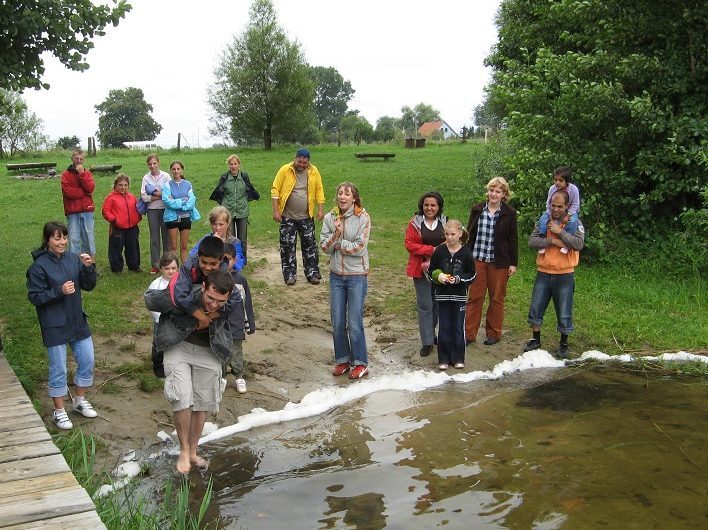 Anna Franze (age 36) teaches in the social work department of the University of Hamburg. She also does voluntary work supporting the staff at a shelter for refugees in her neighbourhood, and she is an ally of ATD Fourth World. Below is an interview of her conducted by ATD Volunteer Corps member, Katia Delisse-Mercelis.

You grew up in East Germany, in the former German Democratic Republic.

I was born in 1979 in East Berlin, capital of the GDR. The upheaval of 1989 was a very intense time for me. Everyone I knew — my family and friends —had their lives radically changed overnight. We discovered a new social system, and many doors opened; but the price to pay for that was high unemployment and times of poverty. These experiences profoundly affected me.

Now I live in Hamburg. With my students, I think about what constitutes good pedagogy and good social work. With voluntary workers helping refugees, I talk about the best ways of helping others and also of taking care of themselves. I advise day-care workers and school teachers about the living conditions and the educational needs of refugee families.

How did you first get involved with ATD Fourth World?

After a good year as an au-pair in London, I wanted to go somewhere that my help would be needed more than in a middle-class family. What I like about ATD Fourth World, in addition to it tackling poverty and exclusion, is the international aspect. I spent six months with ATD in England in 1999 and there I met ATD Volunteer Corps members from France, the USA, and Singapore. They each brought experiences from other countries. What I found really fascinating is the way different cultures have of looking at things.

So I started to take an interest in ATD back in Germany and internationally as well. In 2000, I visited both ATD’s international centre in France and its centre in Germany, Haus Neudorf, about 100 kilometres from Berlin. I’ve remained involved ever since. At Haus Neudorf, I met and continue to meet some very mixed groups. There I see more openness and commitment of people to one another than anywhere else, and I still find that very inspiring.

What’s it like living in Hamburg? Is poverty visible in that region?

Hamburg is the wealthiest city in Germany, but poverty also exists there. In the rich residential areas, everything is quiet and green, and the properties are large and well maintained. In the low-income residential areas, everything is noisier, dirtier, drearier, smaller, and older. What is especially hidden is the poverty of elderly people. Because they are particularly ashamed of their poverty, they withdraw inside their homes — for example when they can no longer afford leisure activities — and so they become invisible.

Hamburg is also the capital of charitable foundations in Germany, and they prefer to focus on children. As soon as people become adults, public opinion considers them responsible for their own fate and no longer wants to offer them any support. That troubles me deeply, because children need stable parents more than they need yet another aid project.

You have been working with a family of Afghan refugees for fifteen years, and now you work with people coming to help refugees. Why is that important for you?

For decades, refugees have been greatly disadvantaged from a legal perspective compared with citizens, and they often live in insecure conditions. That makes healthy development extremely difficult for children and adults. Also, it constitutes a violation of the first article of the UN’s Universal Declaration of Human Rights: “All humans are born free and equal in dignity and rights.” For me, that’s the reason to get involved. When people come into contact with refugees, a lot of them say, “I would never have thought, in a country so rich, that human beings would be treated so badly and have to live in these conditions.”

Another reason this is important to me is that I was and I remain impressed by the strength and the zest for life of many people who experience life as refugees. Having seen their lives threatened, many people live much more intensely. This gives hope.

Do you see a connection with your experiences in England?

At ATD in England, I had a lot of time to think about poverty and exclusion and I came across a lot of new ideas. What seemed clear to me is that people in situations of poverty need a lot of energy and ingenuity in their daily life; that we shouldn’t just help people, but rather give them the chance to help themselves; that education, culture, and beauty are important for everyone; and that friendship, respect, and sincere interest are extremely important for overcoming the divide that results from exclusion.

Germany has shown itself to be open towards refugees. How do you experience this?

The country has made massive progress. Back in the 1990s, there were people setting fire to refugee shelters and a majority of the public either kept quiet or applauded. The media contributed to the atmosphere with slogans like “the boat is full”.

Today, things have changed. Many residents of Hamburg help out in refugee shelters. Many professional people are looking for the best ways to support voluntary workers: so that they don’t maintain refugees in a situation of dependence; so that they can avoid cross-cultural misunderstandings; and so that they are better able to help, without overdoing things, and avoiding burn-out. I think it’s great.

Even so, the reality is that refugees find support mainly in well-off neighbourhoods. In disadvantaged neighbourhoods, far fewer people come to help refugees and less contact occurs between refugees and their neighbours. To maintain peace in our society, such contact is important.

And there’s something else: even among refugees there are different social classes. The favoured refugees are well-educated Syrians and people coming from countries torn apart by terrorism or war. The people we call economic migrants are less appreciated. Among these are mainly people from Eastern Europe and the Balkans. And right at the bottom in popularity are the Roma. Most people in Germany barely recognise that the Roma lived in their native country with their children in shantytowns, without jobs, without social care, and with no chance of getting an education.

How do you see the poverty of the people you meet?

Many refugees have suddenly fallen into in poverty. Some had a comfortable life in their native countries, but most of them have suffered a lot and lost a lot because they fled; and they have to start again from scratch here, lacking rights and affected in some way by the traumas they experienced. Some are so distressed that they can hardly focus or find the motivation to learn a trade, for example. It’s particularly difficult for them when close relatives or friends are still in danger in their native country or in a transit country.

A woman from Afghanistan escaped a violent husband with her four children. She got as far as Hamburg, but her 15-year-old son stayed in Italy. At the moment she can communicate with him only by telephone. He says to her, “Mum, help me; I’m hungry; I’m freezing.” The mother stays here, practically blind, with the three other children, and is going nearly mad with worry for her eldest son and for the future. Her 10-year-old son is trying to be strong and mature. He often misses school to help his mother go to the doctor’s or to administrative offices. Is that poverty? For me, that is extreme poverty.

One last question: what does the thinking of ATD and Joseph Wresinski mean today for young people in Germany?

This is what comes to mind: Joseph Wresinski’s thinking is, even today, somewhat revolutionary. One day, during a lecture on poverty, I showed a video about the ATD family centre in England. The students were shocked, surprised, and inspired: in the film they saw ATD’s Volunteer Corps members hugging new arrivals! Apparently that works too! For the students, that film opened their eyes. The way professionalism is taught in Germany today is not compatible with a loving welcome — above all, by adults. For these future educators, Joseph Wresinski and ATD raise good questions and evoke passionate responses about human interaction.