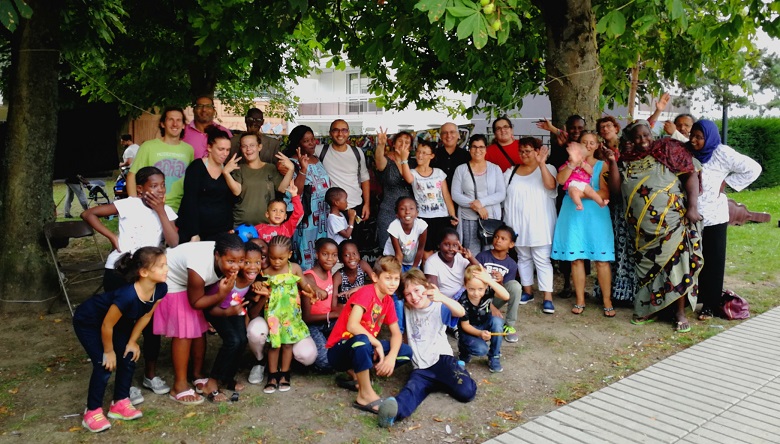 “All children have plenty of ability, but they don’t all have opportunities. What you bring to the neighbourhood, this is opportunities.”

Once again this past summer, Festivals of Art and Learning made their impact in disadvantaged neighbourhoods with music, art and crafts, and fun ways to learn new things. The Festivals took place from May to September 2017 in many countries around the world. Each Festival had its own distinctive mix of sharing and learning between generations and cultures.

During July, children from Germany, Turkey, Lebanon, Palestine and Morocco created puppets. They worked together, those who already knew how to make puppets helping those who didn’t. Children who spoke German helped others who didn’t speak much of the language. The goal was to use the puppets in a theatre production about friendship and peace. After the production, the puppets were sent to a Tapori group in Democratic Republic of the Congo for the 50th anniversary of Tapori.

Simon, an ATD intern, gives his impression of the Festival in a story he wrote called “Uncoloured Night”.

“The door of the commuter train opens. Noisy-le-Grand. Festival of Learning and Arts. The tables are set and the meal is ready. It’s potluck […] The music begins to play and a large canvas is pulled between two trees. Small hands choose their colours. Brushes caress paint. Passers-by stop to watch, and are invited to join in and teach us all…something. They sign up for cooking, dance, bicycle repair, whatever. For right now, maybe tomorrow or after work. Whenever you can come, there’s always room for you to take part. There is room for everyone – for another ten days. “

The Noisy-le-Grand Festival closed in style with a show called “Mamitou lost his head!”

Unlike many neighbourhoods in New York City, Brooklyn’s Brownsville has not been gentrified. Tensions and sometimes violence are part of daily life in Brownsville, yet this didn’t stop parents bringing their children to the festival.

The Festival of Arts and Learning, with this year’s theme of “Movement”, helped people see the neighbourhood in a different light. Through activities such as painting, dance, construction of balloon-propelled cars and “Stop Motion”, participants experienced many different types of movement.

“All children have plenty of ability, but they don’t all have opportunities. What you bring to the neighbourhood, this is opportunities.”

(Uncle of a Child)

People in Brownsville are at the forefront of efforts to improve life in their neighbourhood and the Festival was a great opportunity to develop community spirit and build pride.

One Festival participant explained it this way: “The Festival brought peace to the neighbourhood.”

The festival also offered a learning opportunity for volunteers who helped out with the activities. As one said, “I’ve learned that generosity is about how you give, more than what you give.”

On the other side of the world, in the Trois Bassins neighbourhood, the Festival of Learning and Art was a mix of manual work and artistic creation. At the suggestion of children from the neighbourhood’s regular Street Library, adults and children built a cabin together. The children looked for pallets, parents cut the wood, and once the hut was built everyone helped out with painting.

“The Festival of Knowledge is the only time I can relax!”

Mother of children at the Festival on Réunion Island

This project gave one child the idea to build a mailbox for Tapori. The mailbox will start out in this child’s school and then travel to other schools in the village. Along the way students will put in the mailbox letters they have written to children in other parts of the world who also read the Tapori newsletter. In this way, local schools in Reunion Island can correspond with other Tapori groups throughout the world! 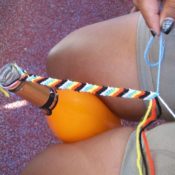 The Festival of Knowledge provided an opportunity for neighbourhood residents to open up and meet new people. One man who is homeless participated in the Festival by sharing his skills a bracelet maker.

For more information about ATD’s work in these countries and others around the world, click here.